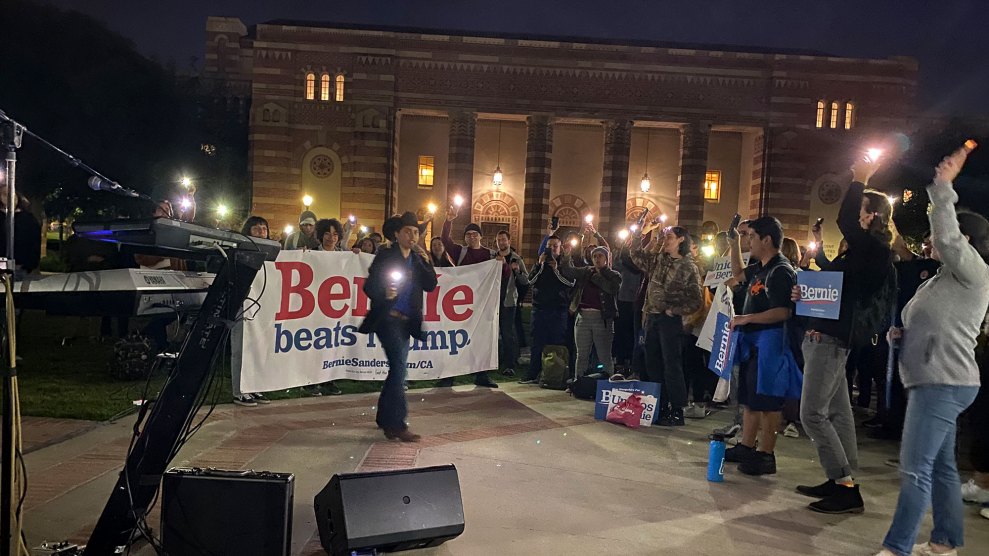 While Bernie Sanders locked down a primary win in frigid New Hampshire, a group of student Berners in the exact opposite corner of the country spent their evening celebrating and recruiting others to join their outreach efforts ahead of the big prize: Super Tuesday.

“What do we want? Bernie! When do we want him? Now!” chanted a group of roughly 80 to 100 students at the University of California–Los Angeles, holding up Bernie 2020 signs in both English and Spanish. The campaign event—one of several planned this week in Southern California—was smaller than I’d expected, perhaps due to midterms or what some students called “freezing” weather. (It was in the mid-50s.) But the folks I talked to were all-in, listing similar reasons for supporting Sanders for the Democratic presidential nomination: climate change, student debt, free college tuition, universal health care, and immigration reform.

Not surprisingly, the main theme of the campus event was the role of young people will play—on Super Tuesday, and beyond. FiveThirtyEight has predicted that Sanders could clean up in California; as Nate Silver pointed out on Twitter, that prediction is “a fairly big reason” why his organization’s model currently has Sanders as the frontrunner. The speakers encouraged the crowd to mobilize for the next three weeks to win Sanders the nomination, and then to stick with it throughout what promises to be a long campaign to defeat Donald Trump.

“Political is personal,” emphasized Joseline Garcia, the student organizer manager for the Sanders campaign in California. Throughout the event, the 25-year-old daughter of Mexican and Guatemalan immigrants hyped up the crowd in her Bernie shirt, cowboy boots, and black cowboy hat, leading chants and imploring students to hold their lit-up cellphones to the sky. When I pulled her away for a moment after the event, Garcia was quick to talk up Sanders’ popularity with Latinx students and noted that this younger cohort of Latinx voters would be vital in mobilizing older generations.

Take Garcia’s family, for example. “My mother is going to be voting for the first time,” she told me. “For Bernie.”

Listen to Tim Murphy describe Bernie Sanders’ journey to frontrunner status, from inside the roaring Sanders celebration party, on this special New Hampshire primary edition of the Mother Jones Podcast: