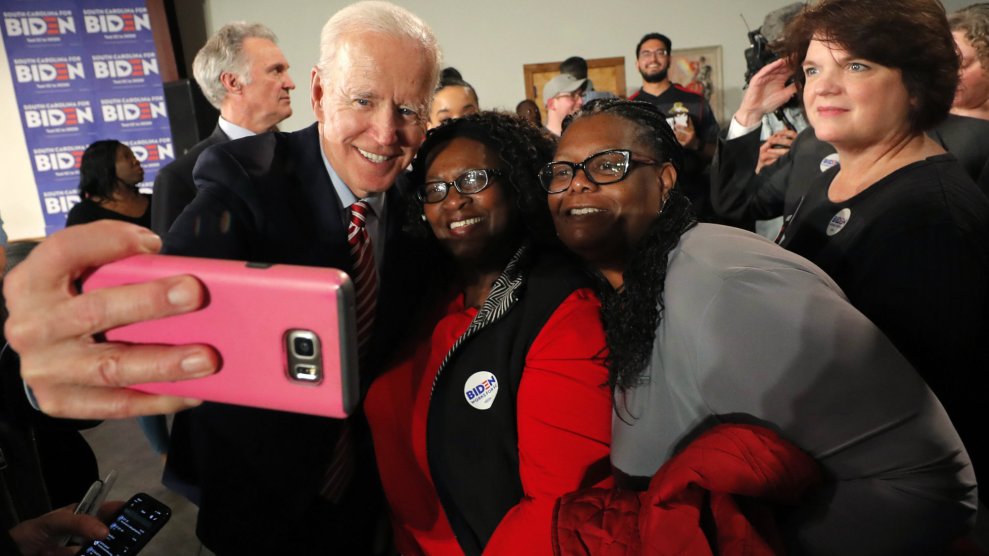 Joe Biden really needs a win in South Carolina. Then again, so do the rest of the 2020 Democratic hopefuls.

The former vice president has staked a lot on the Palmetto State, where the electorate is 60 percent Black, a group of voters Biden has long considered to be his base. A clear victory among these voters would help prove that his campaign was still viable despite his fifth place showing in New Hampshire, behind the 38-year-old former mayor of South Bend, Indiana, Pete Buttigieg, and Sen. Amy Klobuchar (D-Minn.). The reason for Biden’s loss, according to conventional wisdom, is that those candidates appealed to the predominantly white voters in the predominantly white state.

Iowa and New Hampshire’s special get-to-vote-first status has been slammed because they’re not representative of the country as a whole, critics say, and Biden surrogates quickly latched onto that narrative to explain his losses. But South Carolina is different. “Let’s imagine if the states were in the reverse order,” Rep. Cedric Richmond (D-La.) told reporters in a call after New Hampshire. “This whole conversation would be different. So I don’t believe that the momentum here relates and carries forward because we’re in different states, different demographics.”

Nonetheless, Biden may still need to come up with a plan B. “He will not be a winner if he’s only ahead by a few points,” says Todd Shaw, a professor of political science and African American studies at the University of South Carolina. “He’s got to have a decisive victory to back up his claim that there is no cause for alarm.”

That may be difficult since every candidate has embarked on a fierce competition for Black voters. Candidates have reached out to Black communities, courted endorsements, and run ads showing that even though no more Black contenders remain in the contest, they know how to represent this crucial group of voters. “It will be hard to conceive of a Democratic victory in November without Black voter support,” Shaw says. After Biden and Elizabeth Warren finished behind Bernie Sanders, Buttigieg, and Klobuchar in New Hampshire, they looked to more diverse states to assert their continued relevance in the contest.

Of course they weren’t the only ones. Tom Steyer, a billionaire who’s probably most famous for his anti-Trump billboards and his donations to fight climate change, and Michael Bloomberg, the billionaire and former New York City mayor (who isn’t even on the ballot in South Carolina), have also tried to make inroads with Black voters in South Carolina. Bloomberg released a series of ads targeting Black voters; one of them featured an African American business owner touting Bloomberg’s plan to invest in Black-owned businesses. Steyer has been seen in South Carolina having breakfast with Black voters—and winning them over. And even though it was once thought that South Carolina was Biden’s to lose, now “no one is certain who all is likely to be the biggest beneficiary of Black support,” Shaw says.

Even though it was once thought South Carolina was Biden’s to lose, now “no one is certain who all is likely to be the biggest beneficiary of Black support,” Shaw says.

New Hampshire is predominantly white, but the voting patterns there could hint at where some voters of color are leaning. Though the sample sizes for Black voters were too small to measure, Sanders won 39 percent of Latino votes in the Granite State. An NBC/Wall Street Journal poll showed Biden and Sanders running evenly among Black voters. And South Carolina could be a microcosm for the national demographic split among Democrats. Older Black voters may be leaning towards Biden or Steyer while young people may prefer someone further to the left like Sanders.

Biden has spent much of the campaign relying on his name recognition and relationship with Black voters as Barack Obama’s vice president. But while Biden touts Obama’s legacy, some Black leaders in South Carolina feel like he’s forgotten the importance of actually speaking to them personally. “That familiarity and good will does not stay without some cultivation and some work,” Gilda Cobb-Hunter, a South Carolina state legislator, told the New York Times. “There are indications that the vote may have been taken for granted to some extent.”

Tom Steyer is taking advantage of the crack in Biden’s Black firewall. The billionaire’s campaign is a long shot, but he’s made significant inroads, gaining supporters like Cobb-Hunter who has signed on to be one of his advisers. So how’d he do it? “He’s poured boatloads of money into South Carolina,” Shaw says. Steyer has saturated the market with television ads. But he’s also reached out to Black leaders in the state, and his wife, Kat Taylor, even relocated to Columbia, the state capital. “He’s made an Iowa-like grassroots pitch to Black voters,” Shaw says.

Meanwhile, Warren has been targeting Black women, a group Shaw describes as “the most active component in the African American community.” Warren released a plan that specifically addresses the maternal mortality rate among Black women, who are three to four times more likely than their white counterparts to die from pregnancy or childbirth-related causes. The senator has also made the racial wealth gap a cornerstone of her campaign while also winning a key endorsement from Rep. Ayanna Pressley (D-Mass.). Whether those causes will translate into a South Carolina victory is anyone’s guess. “I haven’t seen any headline endorsements for Warren,” Shaw says about Black leaders in South Carolina.

Both Warren and Steyer see the value of underscoring environmental injustices when they’re reaching out to Black voters in South Carolina. Charleston, a historic city on the coast, is low-lying and already suffering from climate-induced flooding. At a rally in Rock Hill, a town in the northern part of the state, Steyer told a crowd that his climate plan begins with climate justice issues. “I [will] start with environmental justice, start with Black and Brown communities where people can’t breathe without getting asthma,” he said. “And if you turn on the tap water and mix up some lemonade you get sick.” Warren brought the issue up at the Nevada debate. “I want to make sure that the question of environmental justice gets more than a glancing blow in this debate,” she said. “For generations now in this country, toxic waste dumps, polluting factories have been located in or near communities of color, over and over and over.”

Then there’s Michael Bloomberg, who as mayor of New York for 12 years supported the police department’s stop-and-frisk policy, the unconstitutional police tactic that led to a disproportionate amount of people of color being stopped, searched, and detained by the police. The practice was roundly condemned as racist—and he’s belatedly apologized for it—but that hasn’t stopped him from making inroads in Black communities.

Like Steyer, Bloomberg’s personal wealth has allowed him to blanket South Carolina with TV ads treating viewers to Black people talking about how great the former mayor has been for communities of color, even though he’s not even on the ballot. Bloomberg has since offered a few apologies for the racist policing tactics as his other comments on race resurfaced. In 2008, Bloomberg blamed the housing crash on the end of redlining, a practice in which banks deny loans to people of color. Then in 2015, he defended his stop-and-frisk policy, saying it works because all crimes happen in communities of color. But still he’s managed to win the endorsement of several Black current and former mayors, including Muriel Bowser, mayor of Washington, DC; former Mayor Stephanie Rawlings-Blake of Baltimore; and former Mayor Michael Nutter of Philadelphia. “Who can beat Donald Trump? That’s what people care about,” Nutter said this month.

Bloomberg is focusing on Southern states voting on Super Tuesday in March. During a rally at Alabama State University, a historically Black college, several hundred people chanted, “I like Mike!” But for how long? Bloomberg’s debate debut was nothing short of disastrous, with Warren needling him on stop-and-frisk and his nondisclosure agreements that critics say enable workplace harassment against women. Those topics will rile up Black women, which can be a campaign killer. “If you lose Black women on racial justice and gender equity?” Shaw says, “Good luck!”

Where does this leave Biden, who is desperately trying to hold his edge among Black voters? Fresh off his loss in New Hampshire, Biden reassured supporters in South Carolina—and maybe himself—that the race had just begun. “We just heard from the first two of 50 states,” he said. “Where I come from, that’s the opening bell, not the closing bell.”