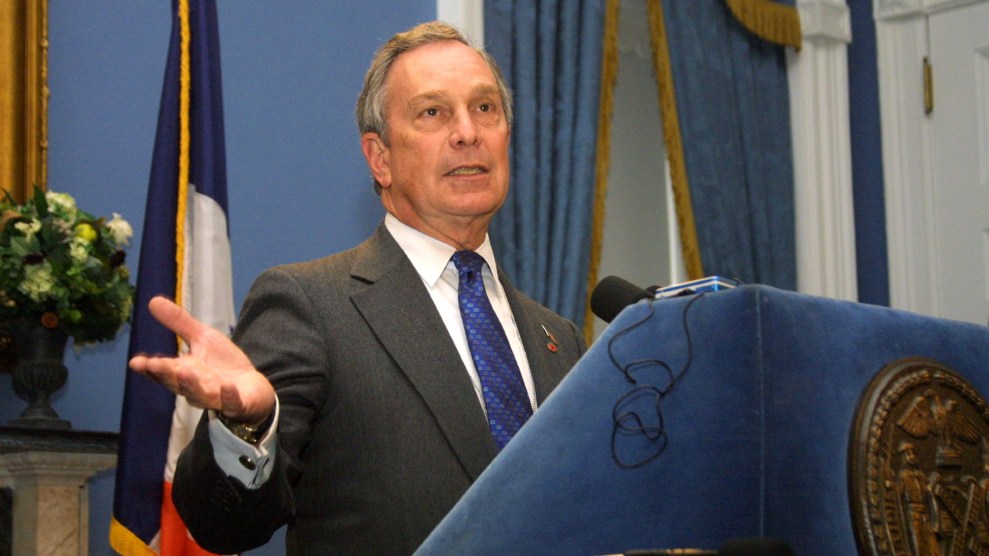 It was the fall of 2002, early in Michael Bloomberg’s first term as mayor of New York. The billionaire-turned-politician had been struggling all year to address a growing crisis: The Big Apple’s homeless population was skyrocketing to record levels, and the city had run out of shelter space. And so Bloomberg’s administration came up with an idea: House homeless families on decommissioned cruise ships.

“It was an absurd plan.”

“It was an absurd plan,” says Patrick Markee, who was a senior policy analyst at the Coalition for the Homeless at the time. “Just a ridiculous idea.”

In the months since Bloomberg announced his campaign to be the Democratic presidential nominee, much has been written about his role in the city’s discriminatory stop-and-frisk policy and his history of sexist comments. His controversial views on housing policy have also received scrutiny—particularly his 2008 comments blaming the financial collapse on the prohibition of the racist lending practice known as redlining. But his record on addressing homelessness during his 12 years as mayor has thus far received little scrutiny.

The plan to use cruise ships as homeless shelters, of course, never came to fruition. But it did get far enough that three administration officials—including Linda Gibbs, who Bloomberg had appointed commissioner of homeless services—took a trip to the Bahamas on one of the mayor’s private planes to tour three retired luxury liners, to see if they could be repurposed for the program. ”In many ways they are ideal,” she told the New York Times. Bloomberg himself later weighed in on the plan, which was scrapped when it received immense backlash after the local press caught wind of it. “If you think about a cruise ship, it’s exactly what you need,” he said on his weekly WABC radio show, the New York Post reported at the time. “Rooms with bathrooms that are safe, that we can afford, in a neighborhood we can use.”

But the cruise ships idea was not an anomaly. When Bloomberg took office at the beginning of 2002, he inherited a staggering homelessness crisis from his predecessor, Rudy Giuliani. “Over the past year, New York City has seen the largest one-year increase in homelessness since the Great Depression,” the Coalition for the Homeless wrote in its 2002 State of the Homeless report. In January 2002, Bloomberg’s first month in office, more than 31,000 homeless residents slept in a shelter each night, which at the time was the “largest recorded shelter population New York City history,” according to the group’s report.

Bloomberg’s administration was struggling to house this surging homeless population and coming up with increasingly worse ideas. Gibbs was nearly held in contempt of the court in early August 2002 for allowing people to stay overnight in the city’s only office intended for homeless families applying for shelter—a violation of a long-standing court order against the practice. Days later, Bloomberg’s administration reopened an old jail in the Bronx as a temporary shelter for homeless families, including many with young children. Four days after that, the jail was once again closed when it was discovered that it was contaminated with lead-based paint. Gibbs was eventually promoted to deputy mayor.

By the end of Bloomberg’s first year in office, the homelessness crisis had only grown more severe. In its 2003 State of the Homeless report, the Coalition noted that the record-setting homelessness numbers reported in the previous year’s analysis had been shattered. “Tragically, the past year has eclipsed that already striking record,” it said. In January 2003, more than 38,400 homeless residents slept in shelters each night, and 2002—Bloomberg’s first full year in office—saw nearly 7,400 more people sleeping in shelters each night than in 2001.

Late last month, Bloomberg’s campaign released a plan to address housing affordability and tackle homelessness. It includes guaranteeing rental assistance for people with the lowest incomes, doubling federal funding for homelessness programs, creating affordable housing units, and increasing incentives to curb housing discrimination. The plan even features a brief, two-paragraph section about “Mike’s Record” on these issues while he was NYC’s mayor, but it makes no mention of his administration’s failures to address the city’s homelessness crisis.