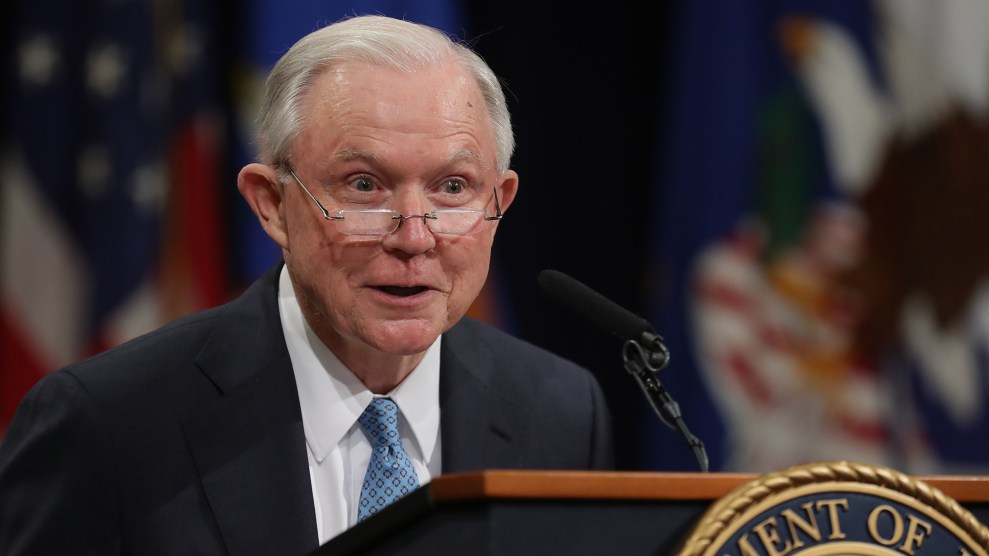 Jeff Sessions is one step closer to returning to the US Senate, where he served for 20 years until Donald Trump tapped him as his first attorney general. Tuesday’s primary in Alabama will send Sessions and former Auburn football coach Tommy Tuberville to a run-off election on March 31 that will finalize who will be the Republican nominee—a contest where the president’s endorsement, if given, could prove critical. In November, the winner of that contest will face incumbent Democratic Sen. Doug Jones, who won the seat in a special election after Sessions joined Trump’s cabinet in 2017.

The top three candidates heading into Tuesday were Sessions, Tuberville, and GOP Rep. Bradley Byrne, and all three worked to outdo the others in showing their loyalty to Trump. “God sent us Donald Trump because God knew we were in trouble,” Tuberville, who has leaned hard on religious messaging, said in a recent TV ad. Byrne trained his fire on both Tuberville and Sessions; in one ad, he claimed Tuberville was fired from Auburn and supports “illegals” in the United States, while accusing Sessions of letting Trump down and failing to put Hillary Clinton in jail. Sessions ran his own ad attacking Tuberville for moving from Florida to Alabama to run for the seat, and reminding voters of his strong support for Trump in 2016 while highlighting Byrne’s comment that he was “not fit” to be president after Trump’s Access Hollywood comments emerged.

Sessions enters the runoff as a known quantity across Alabama, with many of the advantages of incumbency. But with Tuberville running as an outsider trying to clean up Washington and support Trump, voters may determine that Sessions has become part of the establishment that betrayed the president, who fumed over Sessions’ recusal from the Russia investigation and ultimately fired him. If Trump still holds a grudge—and he’s known to hold plenty—he could endorse Tuberville or pointedly sit out the race. Meanwhile, incumbent GOP Sen. Richard Shelby has endorsed Sessions, his longtime colleague.

Also contending on Tuesday was former Alabama Supreme Court Chief Justice Roy Moore, who lost to Jones in 2017 amid accusations that he had assaulted teenage girls. He finished far behind the top contenders.

A fierce fight is expected ahead of the runoff later this month. The winner of the runoff will have a good chance of unseating Jones, widely viewed as the most vulnerable Democrat in the Senate, in a state where Trump is very popular among the state’s GOP majority.