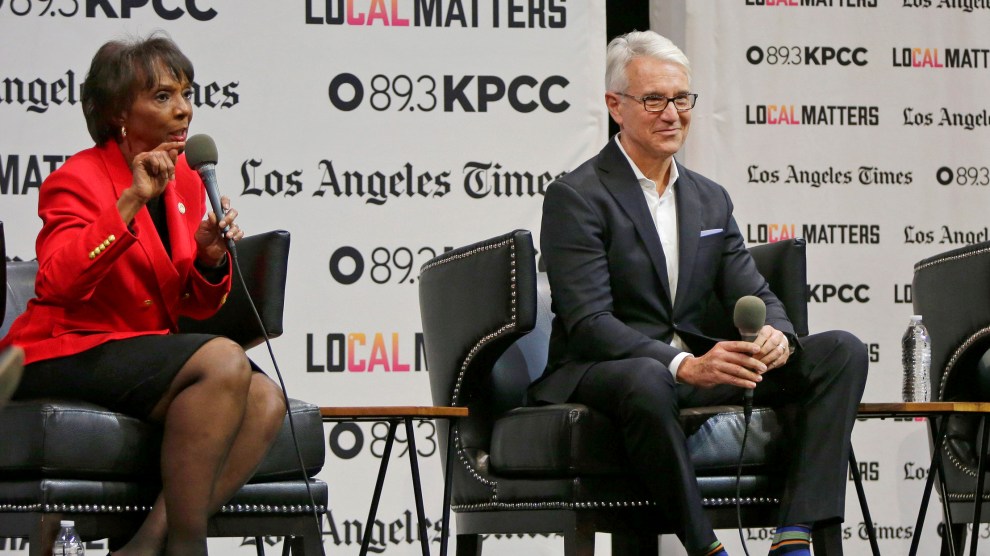 In the sweeping progressive movement to elect district attorneys to reform the criminal justice system, there’s perhaps no greater prize than Los Angeles. It’s home to the biggest district attorney’s office in the country by far, and to the biggest jail system. Weeks after the March 3 primary, the final ballots are still being counted, but enough are in to know the next step, and progressives are cheering: Candidate George Gascón, running on a platform of lowering the prison population, clinched just enough votes to proceed to a runoff in November against the more moderate incumbent, Jackie Lacey.

In Los Angeles, the top two candidates in a primary qualify for a runoff unless one wins more than half the total vote. As of last Friday, Lacey, the first African American and first woman to serve as district attorney in Los Angeles, had received 48.7 percent of the vote. Gascon, the former district attorney in San Francisco, had 28.2 percent, and public defender Rachel Rossi had 23.1 percent. There were still about 20,100 ballots left to count as of late last week, but even if Lacey won them all, it would not be enough for her to meet the threshold to avoid the runoff.

“Thank you, LA. I hope to earn your vote this November,” Gascón tweeted Friday.

The district attorney’s race in Los Angeles has been described by Black Lives Matter co-founder Patrisse Cullors as “the single most important DA race in the country.” It’s important not only because of the county’s size, but also because Los Angeles sees so many police shootings—more than almost anywhere else in the country—and because prosecutors at the district attorney’s office decide whether to press charges against cops who kill. Lacey has faced protests for years from Black Lives Matter activists because her office has only filed charges against one of more than 500 officers who fatally shot people since she took office in 2012. Cullors endorsed both Gascón and Rossi, who each made police accountability a centerpiece of their campaigns. “Jackie Lacey promised reform but has continued…fueling mass incarceration and destroying black and brown communities in Los Angeles,” Cullors tweeted ahead of the primary.

Around the country, it’s rare for district attorneys to prosecute police, since the law is heavily weighted in favor of law enforcement. But district attorneys in other cities have lost reelection in recent years after police shootings of unarmed Black teens like Michael Brown and Laquan McDonald. “It could be a real liability for her,” Rachel Barkow, a law professor at NYU who writes about efforts to reform district attorney’s offices, told me recently when I asked about Lacey’s campaign.

Gascón’s background is not what you might expect from someone championing himself as a reformist: He worked for decades as a police officer and chief before becoming San Francisco’s district attorney in 2011. And like Lacey, he struggled with police accountability during his tenure. In fact, he did not charge any officers accused of fatal shootings. But in other ways, he proved to be a leader in the progressive prosecutor movement: He co-authored a ballot measure that reduced penalties for certain drug offenses, to keep more people out of prison. (Lacey opposed the measure.) In 2019, he supported state legislation that would make it easier for district attorneys to prosecute police. And unlike Lacey, he has pledged to create a “do not call” list of disreputable officers, to avoid relying on their testimony in court proceedings.

The top candidates also diverge in other ways. While Lacey has sent 22 people to death row, all of them people of color, Gascón promises not to seek the death penalty. And though Lacey supports bail reform, she does not go as far as Gascón, who wants to abolish cash bail. Lacey has criticized Gascón for being soft on crime, citing rising car break-ins in San Francisco.

Before the runoff, Lacey will look to capitalize on her strong support from Los Angeles Mayor Eric Garcetti, California Sen. Dianne Feinstein, San Francisco Mayor London Breed, and the local union that represents police officers. In a sign of how much is at stake for law enforcement in November, the union representing the LAPD has donated $1 million to an anti-Gascón super-PAC. Lacey, meanwhile, is benefiting from police donations: Almost all of the $2.2 million in contributions to outside committees supporting her have come from law enforcement unions.