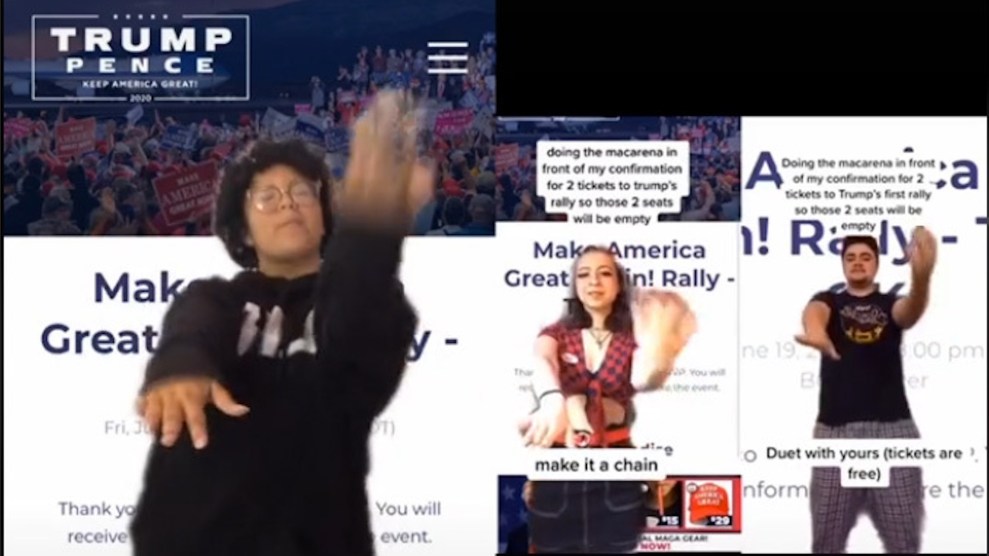 If you believe President Donald Trump, nearly one million people registered for his June 20 campaign rally in Tulsa, Oklahoma. But come Saturday, fewer than 6,200 people showed up, according to the Tulsa fire department. Large swaths of the 19,000-seat arena were empty,  the New York Times reported, and the outdoor overflow venue was such a ghost town that Trump and Vice President Mike Pence cancelled appearances there.

Maybe Trump’s popularity has fallen just that far. Maybe Tulsans were worried about catching the coronavirus. And maybe a horde of K-pop fans and TikTok users successfully pranked the president’s campaign into thinking its rally would be packed to the rafters.

Since June 11, when the Trump campaign asked supporters to register for the event using their phones, social media users been encouraging each other to reserve tickets (for free) to the Tulsa rally with no intention of showing up.

“I just registered for Trump’s rally, and I’m so excited—to not go,” one user posted on TikTok.

Others made similar announcements while dancing the Macarena.

Thousands of fans reportedly joined in the effort.

My 14 year old, at breakfast in Britain: "Oh, yeah, Dad. I did that too. I registered for three tickets to the Trump rally in Tulsa."

On Twitter, Rep. Alexandra Ocasio-Cortez (D-N.Y.) thanked the teens for their service. “KPop allies, we see and appreciate your contributions in the fight for justice too,” she added.

KPop allies, we see and appreciate your contributions in the fight for justice too 😌

It’s not the first time K-pop fans have mobilized en masse for political or social causes in recent weeks. When the Dallas Police Department launched an app for users to send in videos of “illegal activity” taking place at Black Lives Matter protests, K-pop fans crashed it with videos showing their beloved stars dancing and singing. When white supremacists planned a day of action online, attempting to make the racist hashtag #WhiteLivesMatter trend on Twitter, K-pop fans flooded the hashtag with more fancams. And when K-pop boy band BTS donated $1 million to Black Lives Matter, its army of fans matched the contribution within 24 hours.

In a statement, Trump campaign manager Brad Parscale blamed the rally’s poor attendance on protesters and “fake news media” warning people of the risk of catching coronavirus, which has killed nearly 120,000 people in the US.

He also implied that the real purpose of collecting sign-ups for the rally was to harvest the contact information of people who may later be spammed with fundraising requests and targeted political advertising.

Campaign spokesperson Tim Murtaugh echoed this in an interview with Bloomberg: “Leftists always fool themselves into thinking they’re being clever,” he said. “Registering for a rally only means you’ve RSVPed with a cell phone number. Every rally is general admission and entry is first-come-first served. But we thank them for their contact information.”

I wonder how well Team Trump’s data specialists are dealing with their new spreadsheets of minors and BTS fangirls.

Underrated part of the tiktok teens and K-pop fans that bloated the Trump ticket distribution: the campaign now has about a million useless names throwing off their databases