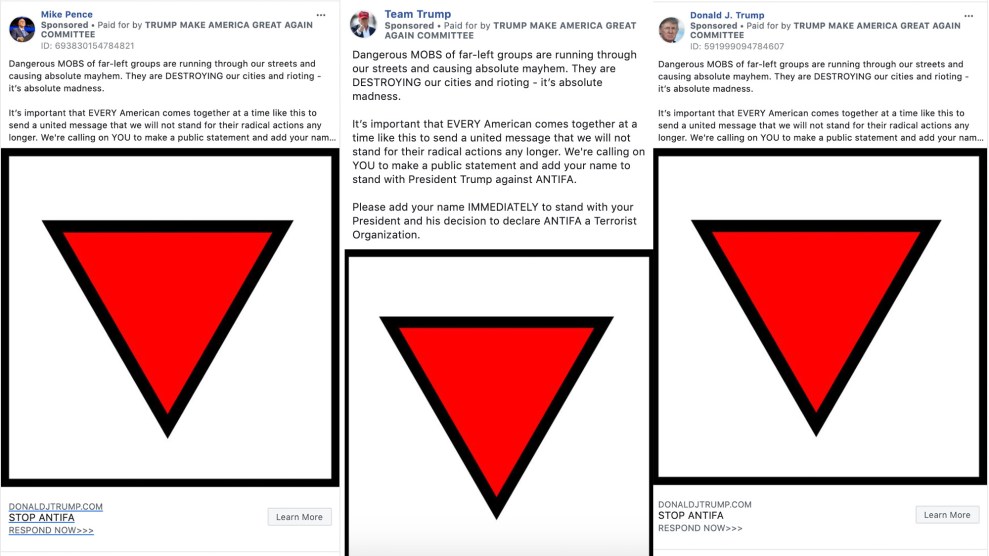 The first result for a Google search of “upside down red triangle” is a Wikipedia page detailing Nazi concentration camp badges. Google’s official “knowledge panel” reiterates this, linking the same Wikipedia page. The results on the rest of the first page almost unanimously show the same thing.

But the fact that the upside red triangle has been an explicit piece of deadly Nazi iconography for seven decades hasn’t deterred Trump’s 2020 campaign from using them in Facebook ads. This week, the campaign started running a series of ads, disparaging Antifa demonstrators and featuring a large, bright red, upside-down triangle. Antifa, is of course, short for anti-fascist. The red triangle was sewn on uniforms of people interned in concentration camps, including anti-fascist political prisoners. Millions of Soviet and Western anti-fascist soldiers died defeating Nazism, including hundreds of thousands of Americans.

“Dangerous MOBS of far-left groups are running through our streets and causing absolute mayhem. They are DESTROYING our cities and rioting—it’s absolute madness,” reads one 2020 Trump ad featuring the symbol.

While the ads appear to have been inactivated by mid-Thursday morning, many were running earlier in the day even as users on Twitter pointed out the Nazi history of the triangle.

The President of the United States is campaigning for reelection using a Nazi concentration camp symbol.

Trump & the RNC are using it to smear millions of protestors.

Their masks are off. pic.twitter.com/UzmzDaRBup

Facebook spokesperson Andy Stone said the company “removed these posts and ads for violating our policy against organized hate. Our policy prohibits using a banned hate group’s symbol to identify political prisoners without the context that condemns or discusses the symbol.”

Media Matters noticed the campaign had purchased a total of 88 ads featuring the concentration camp badge symbol, which Mother Jones confirmed. Each ad started with a 14 word sentence. The number 1488 is a common neo-nazi hate symbol that makes reference to Adolf Hitler and a widespread white supremacist slogan.

This isn’t the first time this week Trump has seemed to make fascist references on social media. Last Thursday, in a tweet he abbreviated the Secret Service to “S.S.,” more commonly known as an abbreviation for Schutzstaffel, a paramilitary organization of Adolf Hitler and the Nazi Party. During the 2016 campaign, his campaign shared an image of Hillary Clinton surrounded by cash and adorned with a six-pointed star reminiscent of the shape Hitler’s Nazi regime forced Jews to wear. After the campaign was widely criticized for wielding anti-semitic tropes, it released a version with the star concealed.