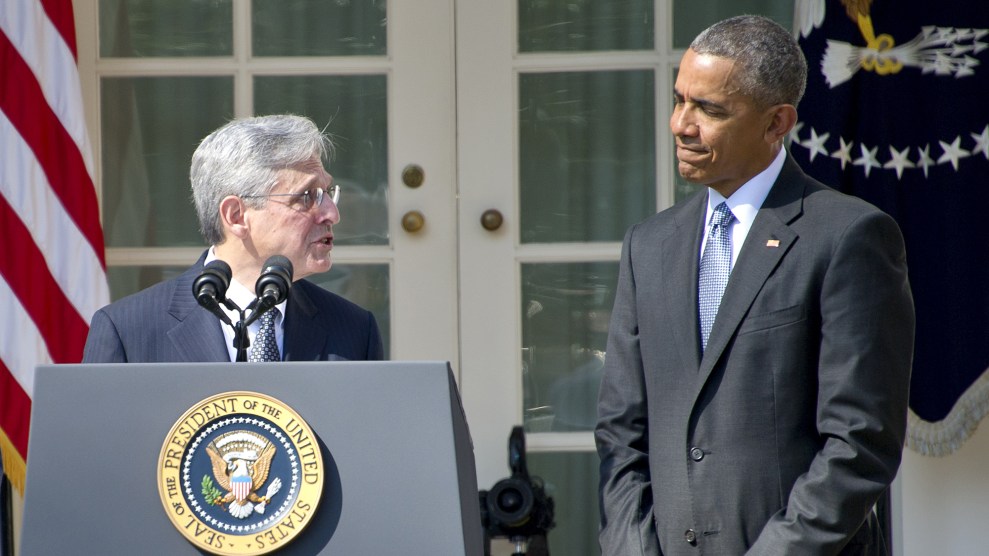 It’s likely just a matter of when, not if, President Donald Trump nominates a replacement for the late Supreme Court Justice Ruth Bader Ginsburg, who died Friday of pancreatic cancer. He held a ceremony at the White House just last week to unveil a short list of future nominees, and at the same time the rest of the country was processing the news of Ginsburg’s death, an apparently oblivious Trump was onstage at a rally in Bemidji, Minnesota, talking about nominating Texas Sen. Ted Cruz to the bench. Senate Majority Leader Mitch McConnell, who had previously gone around the country telling donors that Ginsburg’s death would be his party’s “October Surprise,” pledged Friday that “President Trump’s nominee will receive a vote on the floor of the United States Senate.”

It’s a far cry from four years ago. When this same situation unfolded in 2016, after Justice Antonin Scalia died in February of that year, many Senate Republicans—most of whom are still in the chamber—drew what purported to be a principled line in the sand, insisting that it was too close to the presidential election for President Barack Obama to choose a replacement. It should be up to the voters to decide in November, they argued. Some of them even invoked the words of then-vice president Joe Biden, who as a senator several decades earlier had offered similar logic. They called it the “Biden Rule.” (Biden, in 1992, was not responding to any actual vacancy, but merely a hypothetical one.) When Obama nominated Merrick Garland anyway, no one led the charge as stubbornly as McConnell:

Morning Joe put together a montage documenting Mitch McConnell's shameless flip-flop about the appropriateness of filling a SCOTUS seat in a presidential election year pic.twitter.com/Czc6dmPGbS

But it wasn’t just McConnell. This was the default position at the time. Here’s what a not-comprehensive look at what 17 active Republican senators said.

Sen. Cory Gardner (R-Col.): “I think we’re too close to the election. The president who is elected in November should be the one who makes this decision.”  (source)

“I believe the American people deserve to have a voice in the selection of the next Supreme Court Justice, and the best way to ensure that happens is to have the Senate consider a nomination made by the next President.

Confirming a new Supreme Court Justice during a presidential election year for a vacancy arising that same year is not common in our nation’s history; the last time it happened was in 1932. And it has been almost 130 years since a presidential election year nominee was confirmed for a vacancy arising the same year under divided government as we have today.

In 1992, while serving as chairman of the Senate Judiciary Committee and with a Republican in the White House, Vice President Joe Biden said his committee should “seriously consider not scheduling confirmation hearings” on any potential nominees until the campaign season was over.” (source)

Sen. Lindsey Graham (R-S.C.): “If an opening comes in the last year of President Trump’s term, and the primary process has started, we’ll wait to the next election” (This was actually what he said in 2018, doubling down on his previous stance. )

Sen. Lindsey Graham justifies his treatment of Merrick Garland: "If an opening comes in the last year of President Trump's term, and the primary process has started, we'll wait to the next election" pic.twitter.com/E8N7a8IlIG

Sen. Marco Rubio (R-Fla.): “I don’t think we should be moving on a nominee in the last year of this president’s term — I would say that if it was a Republican president .” (source)

Sen. Jim Inhofe (R-Okla.): “It makes the current presidential election all that more important as not only are the next four years in play, but an entire generation of Americans will be impacted by the balance of the court and its rulings. Sens. Barack Obama, Joe Biden, Hillary Clinton, Chuck Schumer and Harry Reid have all made statements that the Senate does not have to confirm presidential nominations in an election year. I will oppose this nomination as I firmly believe we must let the people decide the Supreme Court’s future.” (source)

Sen. Chuck Grassley (R-Iowa): “A lifetime appointment that could dramatically impact individual freedoms and change the direction of the court for at least a generation is too important to get bogged down in politics. The American people shouldn’t be denied a voice.” (source)

Sen. Joni Ernst (R-Iowa): “We will see what the people say this fall and our next president, regardless of party, will be making that nomination.” (source)

Sen. Thom Tillis (R-N.C.): “Vice President Biden’s remarks may have been voiced in 1992, but they are entirely applicable to 2016. The campaign is already under way. It is essential to the institution of the Senate and to the very health of our republic to not launch our nation into a partisan, divisive confirmation battle during the very same time the American people are casting their ballots to elect our next president.” (source)

Sen. David Perdue (R-Ga.): “The very balance of our nation’s highest court is in serious jeopardy. As a member of the Senate Judiciary Committee, I will do everything in my power to encourage the president and Senate leadership not to start this process until we hear from the American people.” (source)

Saddened by Justice Scalia's passing. The next President must nominate successor that upholds constitution, founding principles.

Sen. Ron Johnson (R-Wisc.): “I strongly agree that the American people should decide the future direction of the Supreme Court by their votes for president and the majority party in the U.S. Senate.” (source)

Sen. Pat Toomey (R-Penn.): “The next Court appointment should be made by the newly-elected president.” (source)

Sen. Richard Burr (R-N.C.): “In this election year, the American people will have an opportunity to have their say in the future direction of our country. For this reason, I believe the vacancy left open by Justice Antonin Scalia should not be filled until there is a new president.” (source)

Sen. Roy Blunt (R-Mo.): “The Senate should not confirm a new Supreme Court justice until we have a new president.”

The Senate should not confirm a new Supreme Court justice until we have a new president. (2/2)

Sen. John Hoeven (R-N.D.): “There is 80 years of precedent for not nominating and confirming a new justice of the Supreme Court in the final year of a president’s term so that people can have a say in this very important decision.” (source)

Sen. Rob Portman (R-Ohio): “I believe the best thing for the country is to trust the American people to weigh in on who should make a lifetime appointment that could reshape the Supreme Court for generations. This wouldn’t be unusual. It is common practice for the Senate to stop acting on lifetime appointments during the last year of a presidential term, and it’s been nearly 80 years since any president was permitted to immediately fill a vacancy that arose in a presidential election year.” (source)

Pointing out all the hypocrisy won’t get Democrats very far in what will be one of the most contentious nomination fights in the court’s history. But it should at least clarify who they’re dealing with.