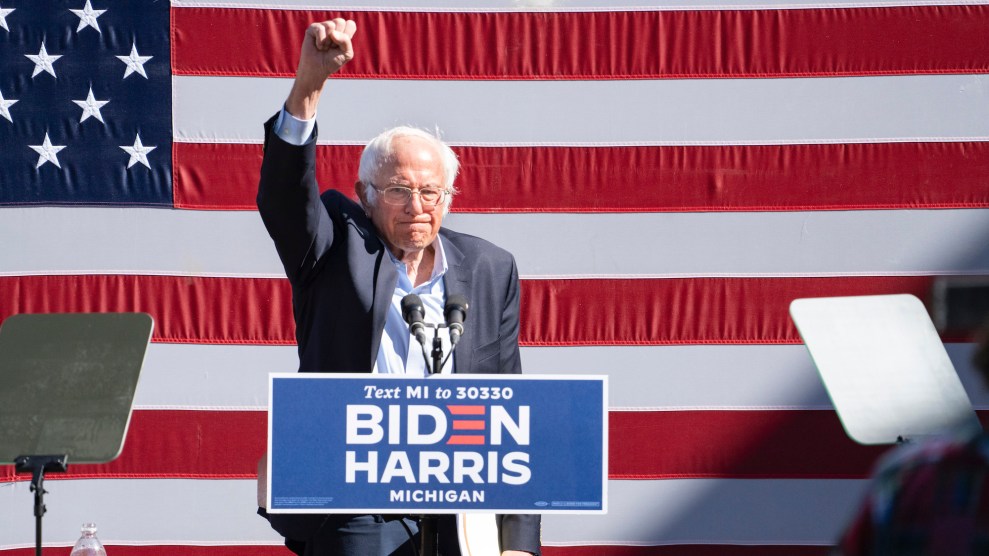 On Sunday evening, the pop star Halsey shared a video starring herself and Bernie Sanders with her 21.4 million followers on Instagram. The post, “Bernie and Halsey Discuss America,” promised an “intimate conversation” with the Vermont senator “to discuss the future of America” and “why they’ll be voting for Joe Biden in November.”

Over the course of eight minutes, Sanders and his 26-year-old host chastised billionaire greed and spoke of the urgent need to address wealth and income inequality. Halsey wondered what a Biden administration would do to address the issue, thinking aloud whether a wealth tax might be one way to “start small.” Sanders didn’t say one way or the other whether he agreed—though he, not Biden, supported a wealth tax during the primary. “The best way we can spend federal dollars is in early childhood education and child care,” Sanders replied.

“Biden has a great deal of empathy as a human being,” he added. “He is more than aware of the suffering that is taking place in our country right now.”

I sat down with @BernieSanders to bring you the first of many more episodes like this one. Register to Vote @ Vote.Org

Such stunts are familiar territory for the 79-year-old senator, who joined millennial celebrity supporters like hip-hop star Cardi B for similar ventures during his second run for the presidency. Now, of course, Bernie Sanders is no longer running for president, and his agenda is not the one Biden promises to promote if he wins the White House. But he is desperately trying to convince the youths—a core constituency of his primary supporters with a spotty track record of going to the polls—to show up and vote for Biden.

Speaking directly to young voters is a theme Sanders has hammered since he returned to public campaign events two weeks ago to boost the Democratic presidential nominee. On Monday, Sanders traveled to Michigan to stump on Joe Biden’s behalf, devoting his remarks to assuring young voters who may be skeptical of Biden that the former vice president would be “the most progressive president since Franklin Delano Roosevelt.” On Thursday, Teen Vogue will host Sanders for a virtual town hall “focused on the stories of young people who are living through unprecedented times.”

This is part of a concerted strategy Sanders has undertaken to shore up support among the demographics who chose him over Biden in the primary, according to Faiz Shakir, who managed Sanders’ 2020 presidential campaign. Even once Biden began to run away with the nomination after the South Carolina primary, the Vermont senator continued to outperform Biden with Latinos and young voters (even though the latter didn’t show up to the polls in the numbers Sanders had hoped for.) Since Sanders left the race, Biden has adopted some planks of Sanders’ platform, such as a promise to cancel at least some portion of student debt for all borrowers. “He’s trying to detail what Biden’s platform would actually mean for working people,” Shakir explained of Sanders’ strategy for helping Biden. “There are important progressive gains for people on the table.”

To be clear, there’s no indication Biden needs too much of Sanders’ help with the youth vote. He has his own youth-focused grassroots efforts and a legion of Gen Z and millennial celebrity surrogates—including Taylor Swift, who made her first-ever presidential endorsement on Biden’s behalf. The most recent New York Times/Siena College poll found that 66 percent of voters age 18-29 have a favorable opinion of Biden—a rating considerably higher than what Hillary Clinton enjoyed leading up to the general election four years ago. That enthusiasm seems destined to put Biden over the finish line with a coalition that powered Barack Obama’s 2008 “youth-powered” victory.

But that hadn’t been true even as recently as June, when another New York Times/Siena College poll found that just roughly half of voters age 18–29 had a favorable view of the former vice president. In the heat of the Democratic primary, a February Quinnipiac University poll found that only 34 percent of voters age 18–34 viewed Biden favorably—compared to Sanders, of whom 60 percent said they approved.

Some of that shift might be in thanks to Sanders, explains Ben Wessel, the executive director of NextGen America, a youth-focused super PAC. In polling and focus groups with young voters in swing states, NextGen found that motivation to vote for Biden increased when young people learned about the Biden-Sanders unity task forces, an effort in which Biden allies worked with Sanders’ allies to make his platform more progressive. That was especially true for those who had been less enthusiastic about the former vice president. They also responded well when the more progressive aspects of Biden’s platform—such as his support for debt-free college and a transition to clean energy by 2035—are emphasized. “Young people really like the idea that Joe Biden said he was going to listen to the progressive wing of the party,” Wessel says.

Some of Sanders’ former supporters have leaned on their own come-to-Biden moment as a way to connect with others who might be feeling the same way. Rep. Alexandria Ocasio-Cortez (D-N.Y.), a key Sanders surrogate, has pleaded with her massive following to mobilize on Biden’s behalf. “Voting for Joe Biden is not about whether you agree with him,” she said in an Instagram video last month. “It’s a vote to let our democracy live another day.” A 19-year-old Sanders supporter started the Instagram account Settle for Biden when Sanders dropped out of the presidential race. Since then, it’s drawn nearly a quarter of a million followers with posts that emphasize the progressive planks of Biden’s platform and memes that both empathize with disappointed liberals—while also encouraging them to get over it.

Lately, though, Biden has taken great pains to distance himself from Sanders. “I am the Democratic Party right now,” Biden said during last Tuesday’s debate after Donald Trump scoffed that socialists would “dominate” Biden when he took the White House. During an NBC town hall on Monday night, Biden drew a sharper contrast with the Vermont senator, reminding viewers that he’s “the guy who ran against the socialist.”

Biden has his reasons for drawing the contrast: For every young voter who needs to hear Biden adopted Sanders’ vision, there’s a moderate voter who craves the opposite assurance. Sanders aides, for their part, have fumed over Biden’s statements. One privately mused to me earlier this week that there’s probably a more respectful and subtle way for Biden to make his point.

But for Sanders, for whom Trump’s reelection conjures memories of family members who died in Nazi-occupied Poland, the abuse is worth enduring. This is why he bowed out of the 2020 race as soon as it was clear he would not be the Democratic presidential nominee. It’s why his DNC delegates, after causing a self-described “shitshow” in 2016, limited their infighting to disputes over the party’s platform and quietly united behind Biden once it had been settled. And it’s why Sanders returned to the campaign trail late last month to deliver an ominous speech warning of Trump’s refusal to promise a peaceful transfer of power.

Sanders’ interests, of course, go beyond ousting Trump. The organizing that goes into getting Biden over the finish line has the added benefit of reenergizing progressives around his platform—a prerequisite for mounting meaningful intraparty fights, should Biden win the White House and Democrats regain control of the Senate. Sanders previewed his playbook during his speech in New Hampshire last weekend, diverging from his prepared remarks to note that he’ll become chairman of the Senate’s health subcommittee if Democrats assume control of the chamber. “Trust me, that the health care industry and the drug companies will understand a very new reality when that happens.”