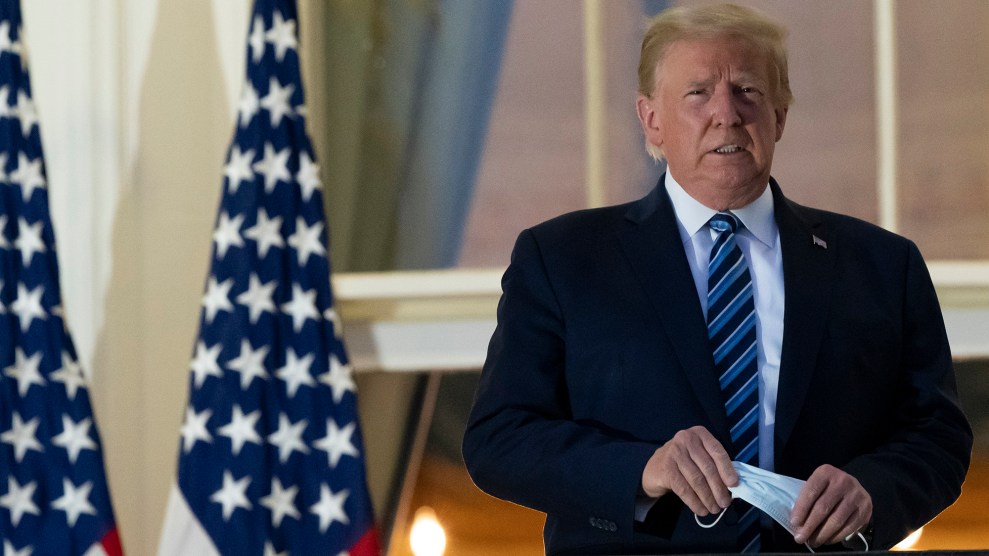 Donald Trump holds his face mask in his hands on the White House balcony after he returned from Walter Reed National Military Medical Center.Alex Brandon/AP

In a fundraising email sent to supporters Tuesday morning—titled “Best I’ve felt in 20 years!”—President Trump continued to downplay the threat of the coronavirus while seeming to suggest that therapeutics alone could defeat the disease that has claimed more than 210,000 American lives.

“Don’t be afraid of Covid,” the email says. “Don’t let it dominate your life! This is the greatest country in the world, and under the Trump Administration, we have developed some really great drugs and knowledge. WE WILL BEAT THIS, TOGETHER!”

The email is a continuation of the president’s theatrical performance of good health, even as he appeared to gasp for breath outside the White House Monday night. There is still no vaccine or known cure for the virus, though Trump has had access to a superb level of care and experimental treatments that have been denied to most Americans who have suffered from the disease. But instead of resting and getting better, Trump promises in his email to get back to work.

“Now, I am fired up and ready to KEEP FIGHTING FOR YOU!,” it says. “This is the FINAL STRETCH of the Election and we can’t take any days off.” Still, it is unclear what, if anything, Trump is doing to protect the virus from spreading within the White House, where countless housekeepers work in close proximity to the president. Trump’s resistance to even the most basic precautions against COVID-19 took symbolic form when the president, presumably still infectious, removed his mask while standing on a White House balcony Monday evening.

Trump’s last official outing before announcing his COVID-19 diagnosis was a campaign fundraising event in New Jersey, where he flouted social distancing guidelines. As my colleague Russ Choma reported:

President Donald Trump, who announced on Friday that he had tested positive for COVID-19, did not wear a mask during a Thursday afternoon campaign fundraiser at his Bedminster, New Jersey, golf club, according to a person who was at the club. Trump mingled with the crowd of about 150 donors, at one point going table-to-table to shake hands with attendees, according to the source, who asked not to be identified. This behavior is typical for Trump when he visits the club—members often approach him to shake hands and chat. But this time, Trump may have been contagious.

Read the full fundraising email below: