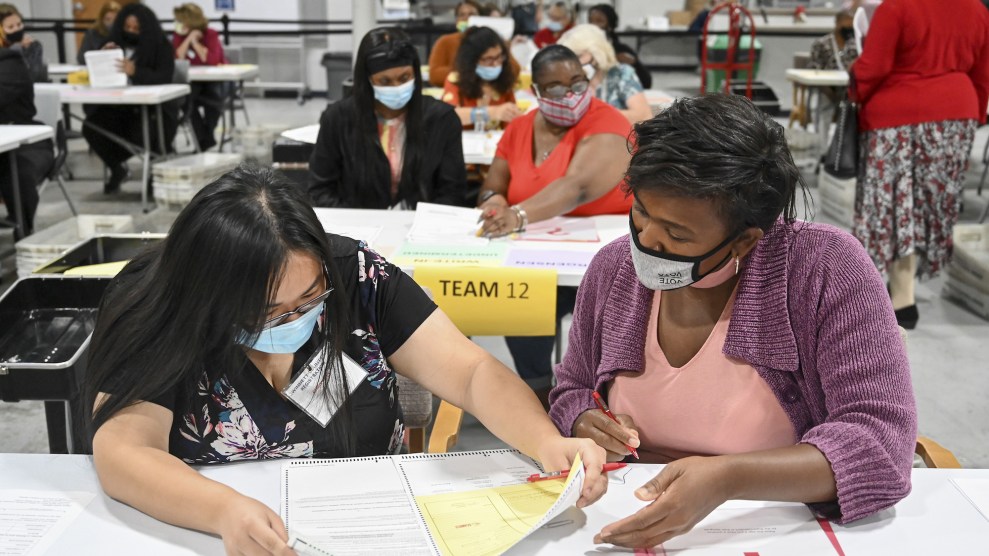 Election workers in Gwinnett County, Georgia, work through a recount of 414,000 ballots.TNS via ZUMA Wire

Election workers in Georgia are toiling away to recount ballots cast in the presidential election—just as the coronavirus is racing toward a new, deadly peak.

Georgia Secretary of State Brad Raffensperger (R) ordered a full hand recount of the presidential race on Wednesday, amidst unfounded accusations from President Donald Trump and other Republicans of widespread election fraud. Most major news outlets have called the race in Georgia for Joe Biden, who held a lead of roughly 14,000 votes heading into the recount.

Election workers across the state began recounting ballots—more than 5 million in all—on Friday. They have been working through the weekend in order to meet a Wednesday night deadline. Brendan Keefe, a reporter at Atlanta’s NBC affiliate, tweeted that the methodical process is “uniform across Georgia,” requiring election workers to sit in pairs and read aloud who each ballot was cast for, before sorting them into piles. Photos from recount centers show workers sitting close together, wearing masks and face shields as they count.

Some election offices have moved recount operations from their county facilities to larger venues. For example, Fulton County, Georgia—the largest in the state—is holding its recount at the Georgia World Congress Center, a convention complex in downtown Atlanta. A coronavirus outbreak in Fulton County’s election warehouse last month sickened 28 employees and left one dead.

This is the first time a so-called “risk-limiting audit” has ever been conducted in Georgia. Janine Eveler, the elections director in Cobb County, Georgia, expressed doubt that it would result in meaningful changes to Biden’s lead. She told NPR that she believed any differences would likely be attributable to human error. “That’s one thing that machines are really good at, is counting,” she said. A coalition of federal and election officials announced last week that they believe the election on November 3 was the “most secure in American history.”

Meanwhile, the coronavirus is surging in Georgia, much like in the rest of the United States. As of Saturday, the two-week rolling average of daily deaths there is 34.5, an increase from 26.6 during the previous two-week period. On Friday, Georgia Gov. Brian Kemp (R) renewed the state’s coronavirus restrictions, which currently ban gatherings larger than 50 people but do not require the wearing of masks. Local officials may impose a mask mandate but cannot require businesses and residences to follow it.

Though Trump and his allies had been among those calling for the hand recount, the president has since railed against it, spreading false claims that the settlement of a 2019 lawsuit between Raffensperger and the Democratic Party of Georgia has made it “impossible to check & match signatures on ballots and envelopes.” On Saturday, Trump tweeted that the effort was a “waste of time.” He reaffirmed that position on Sunday, tweeting that it is “a scam” and “means nothing.”

Doing a great job in Georgia. Their recount is a scam, means nothing. Must see fraudulent signatures which is prohibited by stupidly signed & unconstitutional consent decree. @BrianKempGA https://t.co/UtEp3FN22S

As of Sunday afternoon, Fulton County was set to finish its audit ahead of schedule. The election results are expected to be certified soon after the Wednesday night deadline, though Trump will then have the opportunity to request yet another recount.