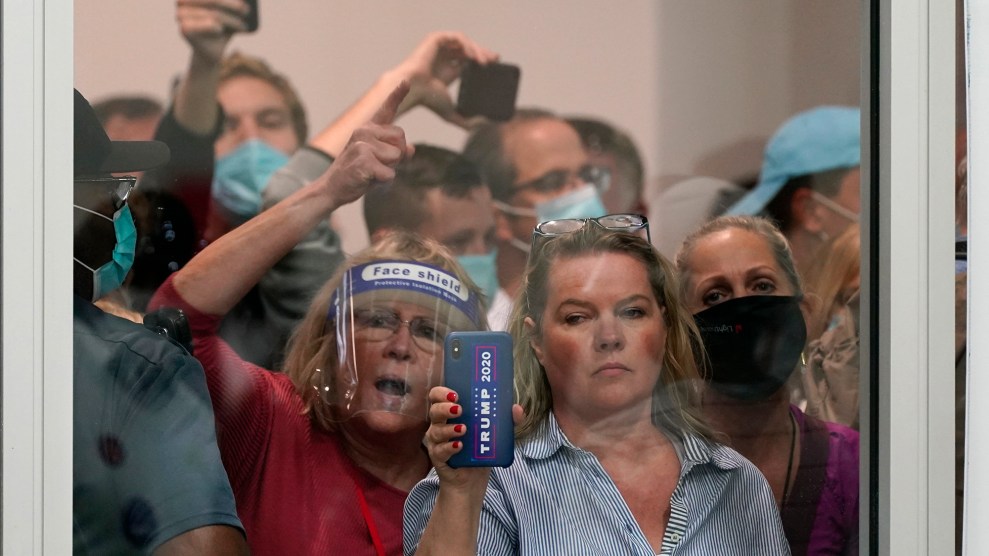 If you want to understand what has and hasn’t changed about the Republican Party between 2000 and 2020, just consider the aftermath of those two presidential elections.

In 2000, you’ll recall—or maybe you don’t, it was a long time ago, and Bush v. Gore is by now old enough to have its absentee ballot challenged by Republican lawyers—Democrat Al Gore trailed George W. Bush in Florida by a tiny margin. After Gore’s campaign requested recounts in Broward, Palm Beach, Volusia, and Miami-Dade counties, Republican lawyers and operatives worked to shut those recounts down. Lawyers did what lawyers do (litigated all the way up to the Supreme Court, which ended the recounts), and operatives did what Republican operatives do: they stormed the elections office in Miami-Dade County and succeeded in shutting down the vote tally through extra-legal means. (Participants in the so-called “Brooks Brothers Riot” included Trump crony Roger stone; Trump crony Matt Schlapp; and Facebook’s current DC lobbyist, Joel Kaplan.)

This time, Republicans aren’t even waiting for a recount (actually, they’re calling for one in Wisconsin) to try to shut down the process. Trump’s campaign egged on supporters as they gathered to protest outside vote-counting centers in Michigan and Arizona. His campaign is filing lawsuits to stop votes from being counted in three states. Trump is, if any of that was ambiguous, literally tweeting it:

Stopping the initial counting of votes is an order of magnitude different than stopping a recount of votes, in very Trumpian ways—it’s overtly undemocratic and unashamedly authoritarian, a logical product of an administration that has never even bothered to keep up appearances as it’s flouted ethical and legal standards. Not every election gets a recount, but if you’re not counting every ballot in every election, you might as well not hold elections at all. The fact that the argument is even being made, and the broad traction it has found among Trump supporters, is yet another example of how successfully Trump has subverted democracy and the rule of law for his own ends.

But it also didn’t just happen. What Trump has done and is trying to do this election is just the souped-up model of the power grab that came before it, and the model—an attack on the franchise and the democratic process couched in legalism and the mirage of popular support—looks quite familiar. The cast of characters hasn’t even changed that much. In 2000, Roger Stone was a gadfly and self-described political dirty trickster for Republicans, and now he’s the main event at rallies with embattled senators in swing states even after being convicted of lying to Congress and witness-tampering. Matt Schlapp was in Las Vegas today to allege wide-scale voter fraud without any evidence. In 2000, Brett Kavanaugh, John Roberts, and Amy Coney Barrett helped Bush’s legal team. Now they’re on the Supreme Court. The Kavanaugh or Roberts or Barrett of the future might be writing a brief in Philadelphia right now, hoping—like Bush’s legal team did—that a transparently partisan effort will be laundered and validated by a sympathetic partisan judge. The Supreme Court has certainly given them hope—Kavanaugh favorably cited Bush v. Gore in a recent opinion.

Trump is different and what makes him unique in the modern American presidency can’t be overstated—not even George W. Bush would vote for him this time around. We’ve entered a new political landscape. But if you squint, you can still see the road that got us here.