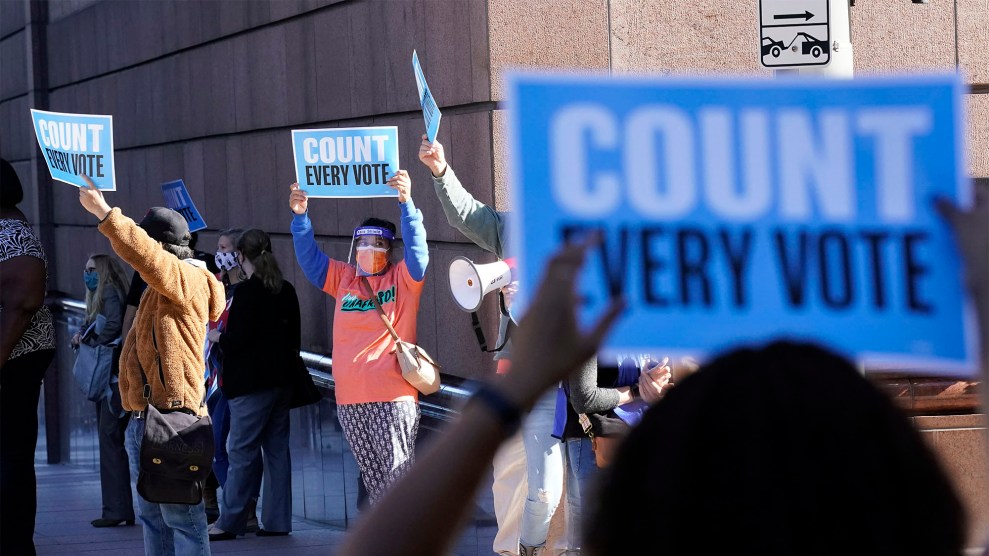 Demonstrators stand across the street from the federal courthouse in Houston, Nov. 2, 2020, before a hearing in federal court involving drive-thru ballots cast in Harris County. David J. Phillip/AP

A conservative federal judge rebuffed GOP attempts to invalidate 127,000 drive-through votes in Harris County, Texas, ruling that the Republicans did not have standing to sue.

“People have been voting since October 13,” said Judge Andrew Hanen, who was appointed by George W. Bush and is regarded as one of the most conservative judges in America. “I find that not to be timely,” he said of the lawsuit.

Harris County Clerk Chris Hollins adopted drive-through voting as a safe way to vote in a pandemic, especially since Texas law does not allow voters under 65 to cite fear of contracting COVID-19 as a reason to vote by mail. It proved very popular and helped lead to record voter turnout in the county, comprising nearly 10 percent of total votes.

Bipartisan county officials and the Texas secretary of state signed off on the plan, but right-wing activists—including a QAnon conspiracy theorist who has sued the state repeatedly and called COVID-19 a hoax—challenged drive-through voting only after thousands of votes had already been cast in Harris County. They were twice denied by the Texas Supreme Court but appealed to Hanen in a last-ditch attempt to invalidate ballots in Texas’ largest county. The plaintiffs argued that voting in a car was subject to different rules than a voting booth, but Hanen said, “I ain’t buying that.”

Harris County has been rapidly trending blue, and drive-through votes have been cast in larger numbers in voting precincts that favored Hillary Clinton in 2016 and Beto O’Rourke in 2018.

Hollins told me recently that Republican voter suppression efforts, such as Gov. Greg Abbott’s order limiting mail dropoff sites to one per county, have backfired on the GOP by making Democrats more determined to vote early in record numbers. The county also took aggressive action to make it easier to vote, such as tripling the number of early voting sites, keeping the polls open for 24 hours last Thursday, and adopting drive-through voting.

Voters who used drive-through voting demonstrated outside the courtroom in Houston on Monday, holding signs reading “count every vote.”