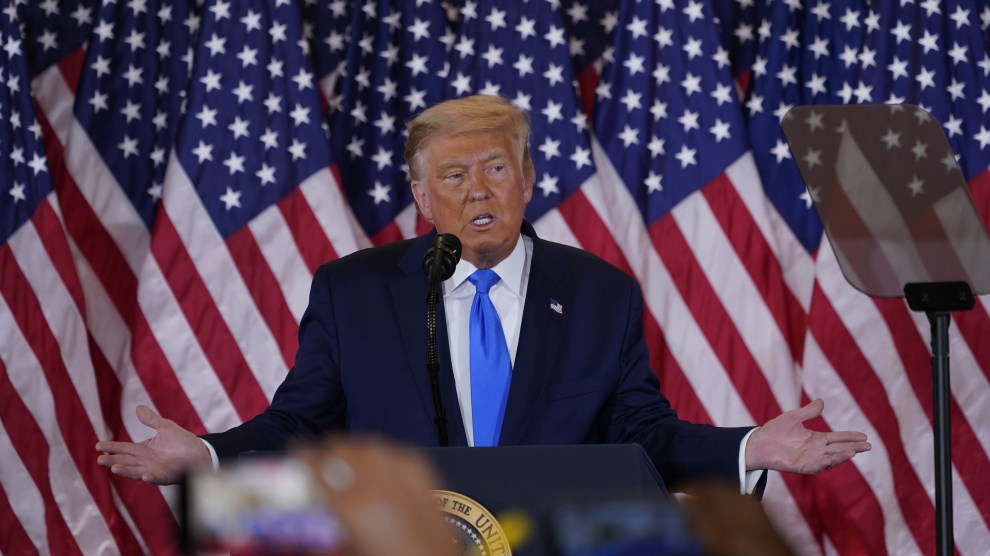 Donald Trump makes a statement to the nation as his supporters look on in the East Room of the White House on Election Night.Chris Kleponis/Zuma

In the early hours of Wednesday morning, the United States still didn’t know who the next president would be. Due to a record turnout and an increase in mail-in ballots due to the coronavirus pandemic, tabulating the votes in key states has been predicted to take days. Despite those facts, Donald Trump is still claiming that he’s winning, and that continuing to count the votes is tantamount to stealing the election. To be clear, as long as a voter is in line when the polls close, their vote will count. Votes have always been counted after Election Day. (Note the Twitter misinformation disclaimer.)

We are up BIG, but they are trying to STEAL the Election. We will never let them do it. Votes cannot be cast after the Polls are closed!

In addition to the incorrect tweet, during a speech from the White House early Wednesday morning, Trump baselessly implied that Trump voters specifically had been disenfranchised, and suggested that votes should not continue to be counted in the coming days. “As far as I’m concerned,” he said, “we already have won it.” Anchors on the major television networks, including Jake Tapper on CNN and Brian Williams on MSNBC, quickly cut in to clarify that Trump has not been declared the winner and that he cannot declare victory until all the votes are counted. He also incorrectly claimed he had won specific states that had not yet in fact been called for him, and noted he’d take the fight over the vote to the Supreme Court.

While galling, Trump’s rhetoric should not come as a surprise. He said he would do this. He loves to take credit for things even when he deserves no credit, when he has in fact lost, or when he is lying. As I wrote on Monday:

According to an Axios report, Donald Trump is planning on declaring a premature victory if it appears that he is ahead before all the ballots are counted. Because coronavirus concerns curtailed in-person voting, many states, including pivotal ones like Pennsylvania and Wisconsin, are dealing with a deluge of mail-in ballots, presumably from mostly Democratic voters. Trump has urged his supporters to vote in person to avoid non-existent mail-in voting fraud. But his campaign strategy seems to be that with many in-person votes cast for him, he will use the opportunity to claim victory early by lying that the remaining ballots are fraudulent.

His fake claim joins a long list of other instances in which Trump has called himself a winner without evidence. For example, though he lost the popular vote by 3 million votes in 2016, he claims he won it—you’d just need to deduct the millions of so-called “illegal” ballots cast for Hillary Clinton. And he repeatedly speaks about the coronavirus, which has killed 231,000 people and is surging across the country, as if he’s defeated it. It’s all part of a steady pattern we’ve seen over the last four years:

Despite his long track record of claiming victory without any evidence, Trump insisted the reports about his premature declaration of victory are fake. But he has made it clear that he’s planning a bitter fight in the courts to have mail-in ballots in key states discredited, because in his mind, he’s already the winner. “As soon as that election is over, we’re going in with our lawyers,” he told reporters on Sunday night decrying Supreme Court rulings that are allowing Pennsylvania and North Carolina to continue counting ballots that come in after election day. “Because we’re doing great in Nevada. We’re doing great in Arizona, we’re doing great all over.”

Former Vice President Joe Biden made an early morning statement urging his supporters to be patient while Trump decided to plant the seeds for yet another false victory. The reality is that we may not have complete results for key battleground states like Wisconsin, Michigan, and Pennsylvania until sometime on Wednesday. Or later.