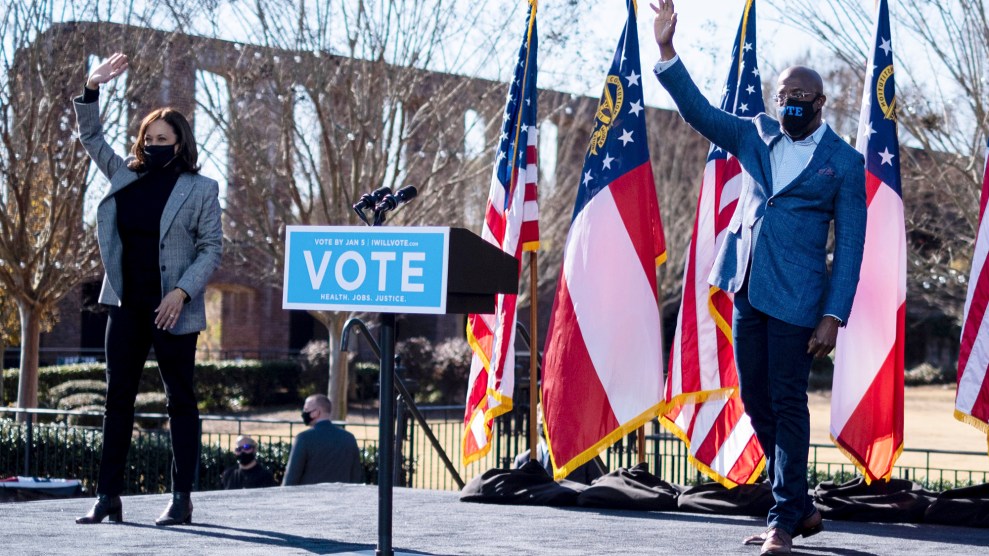 At events and rallies for the Reverend Raphael Warnock, there are a few constants: a sea of cars; a small stage that serves a rotating cast of local politicians and activists, and, eventually, Warnock himself; and a not insignificant number of men, of all ages, sporting black, gold, and white.

While there was an underlying sense of grief at a drive-in rally last month in Albany, Georgia—home to one of the earliest coronavirus superspreader events, which particularly impacted the local Black community—the men donning the colors of Alpha Phi Alpha were still joyful, excitedly calling back and forth to each other, laughing, bumping elbows. While a few pleas made from the rally stage to physically distance were clearly pointed at them, they’re brothers, and one of their own is in a nail-biting runoff for a US Senate seat. And if he wins, he’ll make history as Georgia’s first Black senator. Following a year with so much grief and anguish, of course they wanted to celebrate.

“It is important that we support [Warnock] and show the community that we are behind him.”

Even as Warnock addressed the pain of loss, paired with the burdens of voter suppression and continued police violence against Black men, his brothers offered their support; one of them periodically raised a sign in response to his speech, pumping it in sync with the sound of cars honking: BLACK VOTERS MATTER.

Warnock was initiated into Alpha Phi Alpha Inc., the oldest historically Black fraternity in the country, in Harlem, New York in 1993. “In a word, it means ‘service’ for me,” Warnock explained in a video on Twitter late last year. “It’s also a great fellowship. It’s a wonderful way of connecting to other men with similar values. And while I am a proud Alpha man…there’s a lot of love between all these fraternities and sororities.”

As a nonprofit, Alpha Phi Alpha cannot and does not endorse political candidates, but members do fiercely believe in supporting one another and in being a force of good in their communities. “It is important that we support [Warnock] and show the community that we are behind him,” Albany State University’s chapter president Benny Hand told me at the December drive-in rally. “But more importantly, we agree with his policies, and we believe that his policies will be beneficial to the community that we advocate for.”

@ReverendWarnock’s fraternity brothers are out at every event. Meet his Albany Alpha Phi Alpha brothers. pic.twitter.com/XarbEYEaca

Over the past year, much attention has been paid to the role of these Black Greek institutions in political organizing—specifically in the rise of Vice President–elect Kamala Harris, who was an Alpha Kappa Alpha at Howard. But while the media narrative about their political activity was (understandably) frequently centered on Harris, the work has never been about just one person—as proven by these men working to boost their brother’s candidacy in a critical race that could determine the fate of President-elect Joe Biden’s agenda.

“This is nothing new,” Maisha Land, an Atlanta resident and Alpha Kappa Alpha, tells me. “We don’t just pioneer for ourselves, we pioneer for everybody—but Black women do that all the time.” Black Greek institutions indeed have deep roots in organizing and political leadership that reach all the way back to their origin stories. And Warnock wouldn’t be the first member of Congress from the Divine Nine, as the nine historically Black fraternities and sororities are known; beyond Harris, former Sen. Carol Moseley Braun (D-Ill.) is a member of Delta Sigma Theta, and Georgia’s new congresswoman, Rep. Nikema Williams, is also an Alpha Kappa Alpha.

While that may be the case, there is no denying the role the Divine Nine have played in this year’s election cycle—in boosting voter access, in elevating Harris, and in Warnock’s historic campaign.

All it takes is a quick Google search to see that fraternities and sororities all over the country this year organized expansive efforts to register voters, expand ballot access, and demystify the voting process—crucial work particularly in the midst of a pandemic that caused a lot of confusion and fear.

Notably, in October, Land, who owns a dance studio in Atlanta, organized and choreographed a “Stroll to the Polls” video that went viral. Set to Lizzo’s “Like a Girl,” Land and 19 other women affiliated with Black sororities dance (in heels, no less) against a backdrop of vibrant city murals celebrating Black women to encourage voting. A few weeks later, Saturday Night Live aired a skit featuring Kenan Thompson, called “Strollin’,” that juxtaposed the deep dedication Black people have to voting with the barriers they face in exercising their right to vote. While the SNL skit was not focused specifically on Black Greek organizing, the two videos together offered a jarring, apt representation of the enthusiasm and power that come out of the Divine Nine and the tradition of strolling to the polls, and the way white supremacist systems work to stymie Black voters. “Your vote is everything,” Land says. “You don’t have access to money, resources without a vote.”

This sentiment was felt in a mid-December Zoom rally, which was attended by Rep. Williams and brought together Black Greeks from across the country in support of Warnock’s run. While the gathering was mostly dedicated to Warnock’s stump speech, the power of the Greek networks was evident as folks logged on from all over the country and participated in something of a virtual roll call in the comments—everyone typing out their name, their affiliation, and often some cheer of support for their fraternity or sorority. Meredith Lilly, a senior adviser for the Warnock campaign and an Alpha Kappa Alpha, summed up the atmosphere: “Our call is a family call tonight.”

To his brothers and sisters watching, Warnock said, “I’m just deeply honored because we are a part of the ongoing project of ancestors who believe in America and loved America until America could learn to love us back.”

The Warnock campaign ranks are stacked with people who belong to Delta Theta Sigma, Alpha Kappa Alpha, Alpha Phi Alpha (of course), and others. Phillana Williams, the campaign’s surrogates director, estimates that most of the campaign staff carries a Divine Nine affiliation. Williams herself is a graduate of the University of Houston, where she pledged Delta Sigma Theta. On the phone Sunday from one of Warnock’s final drive-in rallies in Savannah, where Harris was speaking in support of Warnock, Williams mentioned that Atlanta Mayor Keisha Lance Bottoms, another Delta, was also in attendance. (“We’re everywhere!” she joked.) In between bouts of enthusiastic honking, Williams, who joined the Warnock staff after working on the Biden-Harris campaign last year, made note of how Black Greeks were a powerful force in lobbying Biden to choose a woman of color for his VP. “We’ve always been a very strong community,” she said. “And when we come together, we come together stronger.”

“I absolutely know that those values have been implemented in him from that experience [in Alpha Phi Alpha].”

Williams essentially grew up in the Divine Nine. Many of her family members belong to sororities and fraternities, and a commitment to public service and social justice was instilled in her from a young age partly through their memberships. In Warnock, she sees clearly the influence of Alpha Phi Alpha and the Divine Nine network.

“I see it in the campaign, I see it in his leadership,” she said. “He’s a man of morals, and he has strong values, and I absolutely know that those values have been implemented in him from that experience [in Alpha Phi Alpha]—and not only that experience, because it’s a continued experience, it’s a lifelong commitment.”

In fact, several brothers and sisters told me of how belonging to a Black Greek organization is a lifetime membership, which creates a deep and valuable well of intergenerational knowledge. That sort of building-blocks approach is particularly useful in political organizing, a game in which human nature is a constant, and the main change that requires attention is modes of outreach. By way of explanation, Land uses an allegory about standing at a concert. “Well, I can see because I’ve been growing longer than you and I’m taller than you…So what I do, and what we do as elders, is we take you and we pick you up and we put you on our shoulders, so that you can see what we can see. But the beauty of being on my shoulders is…that you can see past what I can see,” she says. “Your job is to tell me what you can see and pass it down to me. So if I need to tell you to look to the left or to the right, I can help you continue that vision. But we can’t do it without each other…but don’t diminish the fact that you have to climb on my shoulders.”

Percival Galloway, an Alpha Phi Alpha chapter president in Augusta, Georgia, echoed this generational commitment when we spoke recently. “Alphas throughout history have always fought against social injustices and fought for the downtrodden,” he said about Warnock’s candidacy. “Our motto is, ‘First of all, servants of all, we shall transcend all’—he’s a servant, a lot of Alphas are servants at heart for their communities.”

Correction: An earlier version of this article misstated that Rev. Warnock was initiated into Alpha Phi Alpha during his time at Morehouse; he joined the fraternity after he had graduated Morehouse.