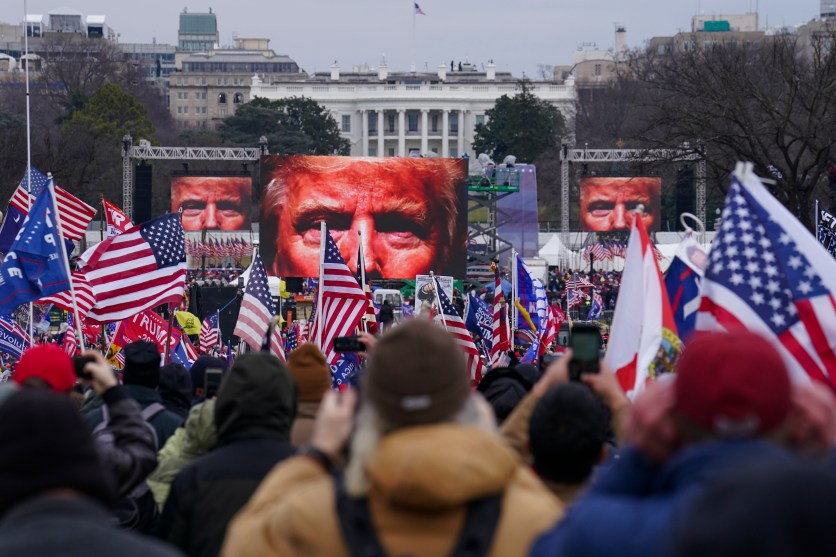 Trump supporters participate in a rally Wednesday, Jan. 6, 2021 in Washington. As Congress prepares to affirm President-elect Joe Biden's victory, thousands of people have gathered to show their support for President Donald Trump and his baseless claims of election fraud. The president is expected to address a rally on the Ellipse, just south of the White House. (AP Photo/John Minchillo)AP

President Trump on Wednesday, in what’s likely to be one of the final political rallies of his presidency, escalated pressure on Mike Pence to take action to overturn the election and keep him in the White House—an act the vice president himself made clear as the president was speaking that he lacks the constitutional authority to carry out.

Pence himself made clear he lacks such constitutional authority.

“If Mike Pence does the right thing,” Trump falsely told a crowd of supporters, “we win the election. He has the absolute right to do it.” But shortly afterward, as Trump intensified his pressure campaign and the crowd on Wednesday chanted “send it back,” Pence released a statement affirming that he didn’t have the power the president imagines he does.

Trump laid out his imagined process for the crowd: “All Vice President Pence has to do is send it back to the states and recertify and we become president and you are the happiest people.” The president also repeatedly attacked Republicans failing to back his futile fight to overturn the democratic will of the nation’s voters and remain in the White House as “weak” and “pathetic.” He also signaled that he’d go after Republicans he believed to be politically against him, such as Wyoming Rep. Liz Cheney, raising the prospect of primary challenges and telling his supporters that they needed to “let the weak ones get out.”

“Your leadership has let you down,” Trump said, referring to Senate Majority Mitch McConnell’s refusal to advance $2,000 stimulus checks as a part of last month’s deal. He claimed, falsely, that his blocking of the checks allowed Democrats to “cheat” and ultimately cost his party the Georgia runoff elections.

The gathering, which brought together white nationalists, Proud Boys, and MAGA fans, came mere moments before Congress convened to certify President-elect Joe Biden’s victory, with Pence having a prominent role in the unusually ceremonial affair.

In a speech riddled with election fraud lies, Trump addresses his supporters: "Mike Pence is gonna have to come through for us. And if he doesn't, that will be a sad day for our country." pic.twitter.com/7LhTPLyAde