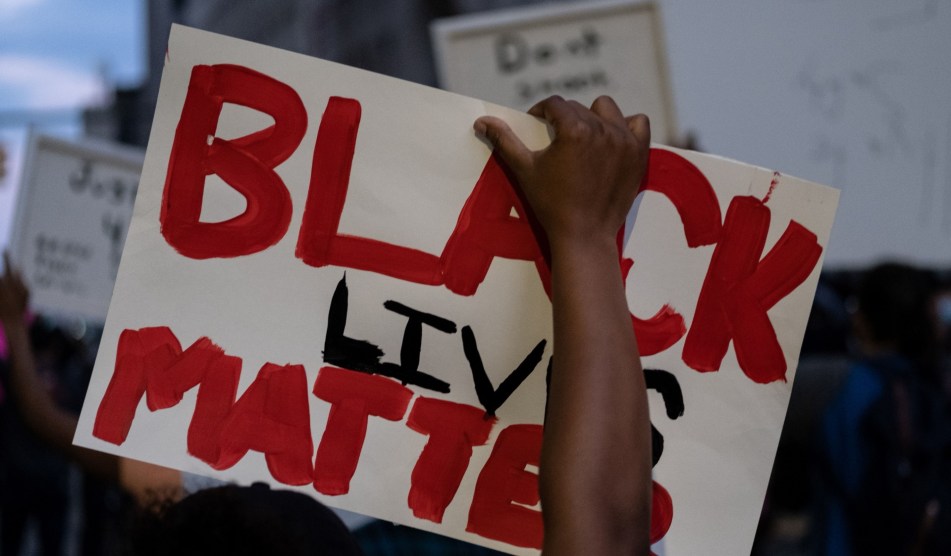 A person holds up a placard that reads, 'Black lives matter' during a different protest in Detroit, Michigan, on May 29, 2020.Seth Herald / Getty Images

This story was published in partnership with ProPublica, a nonprofit newsroom that investigates abuses of power. Sign up for The Big Story newsletter to receive stories like this one in your inbox.

The image on Facebook showed three raised fists — one white, one brown, one black — with the hashtag BLM overlaid in large letters. A date and place to meet was at the bottom: Thursday, June 4. The location: Anna, Illinois.

In November, I’d published a story about this small southern Illinois city’s reputation as a sundown town—a place where black people were not welcome after dark—and the legend about what Anna stands for: “Ain’t No N——— Allowed.” The article stirred up strong feelings in the town, where all public officials, police officers and nearly all teachers are white. While many current and former residents wrote to me to share their own stories about racism in the area, others decried the story as perpetuating the A-N-N-A reputation.

A Black Lives Matter protest in Anna. Who was behind it? How many people would join? What would the reaction be?

And what would this mean for A-N-N-A?

“I was terrified to do this. I’m not going to lie,” said Jessica Moore, 25, one of the organizers.

She added, “I’ve experienced racism in Anna my entire life.”

Moore, who is biracial, grew up in Ullin, a small town about 20 minutes south of Anna. Her earliest memory of being a victim of racism in Anna happened when she was 8, she told me. As she was leaving the Anna Walmart with her mother, who is white, Moore said she remembers a woman screaming at her after she accidentally pushed a shopping cart into her car, repeatedly calling Moore the N-word. When she got older and started going to bars and restaurants in Anna, she said people would call her the N-word, too.

Moore is one of a small group of young people in southern Illinois leading the region’s recent demonstrations against police brutality and in support of black lives, many in towns with histories like Anna’s. Most of the organizers did not know one another a month ago. And many, like Moore, are new to the cause.

After she took part in her first protest in Paducah, Kentucky, on May 31, Moore said leaders there encouraged her to organize in her own community and gave her some tips. A few days later, a lightbulb went off: “It’s time to show Anna,” she thought.

Anna resident Takiyah Coleman, 19, agreed. The two, along with several other young adults from the area, met with Anna Police Chief Bryan Watkins to explain their plan to protest. Watkins said he told them he wanted to ensure they felt safe coming to town to do so, but to also expect some opposition from residents.

“We’ve never had a demonstration in town like this,” Watkins, who said he’s lived in Anna for 45 years, later told me. (He prefers to use the word “demonstrate” instead of “protest,” he said, because “people associate protest with rioting.”)

When Watkins informed residents through his personal Facebook page about the event, the post prompted more than 350 shares and 600 comments, which ranged from curiosity to praise to fear.

“I hope everyone is ready to protect their business with brute force!” wrote one commenter from the area.

“How long do these things typically last??” wrote another.

The comments reminded me of stories people in Anna have told me about rumors spreading through town in the late 1960s and early 1970s that black people from Cairo, about 30 minutes south, were coming up to Anna to riot. That never happened, but some residents remember waiting with guns in case it did.

Anna City Council member Bryan Miller said he got received calls from residents concerned about the Black Lives Matter protest. He and I have been talking since November, when he commented on a Facebook post about my story, saying: “Uhm, I’m guessing [A-N-N-A] doesn’t go away because you keep writing about an issue that is long gone.”

I’ve appreciated our frank discussions about the story and about his community. A new City Council member, Miller said he is determined to erase the A-N-N-A stigma. When residents called him with concerns about the protest, he said that he told them it was a chance to change Anna’s reputation, and that, “I expect you to do your part.”

The day of the protest, a post on the official Facebook page for Anna expressed a similar sentiment: “In recent months, citizens were outraged over an article written about Anna. Well, actions speak louder than words. Tonight is our chance to show the world what we are made of.”

Moore, one of the organizers, said she expected about 60 people to show up. She was wrong.

Nearly 200 people marched through Anna’s streets. Many of them were young and white and described themselves as being from southern Illinois. Other area residents gathered along the route to watch an event many thought they’d never see.

Alexis Steward, 21, who grew up in Anna and helped organize the march, said she spent much of it bawling. The tears started when she began to realize how many people had shown up. She remembered when she was bullied at Anna junior high. She said she wants Anna to be a place where she feels she could start a family, and where she wouldn’t have to worry about her children feeling the pain she felt growing up there.

“We need more people who are educated, loud and who can stand for people who cannot.”

When she marched past some Anna residents she recognized, who she said were screaming at the protesters to “get out of their town,” she said she knew she was doing something right.

So, too, did Aveon Winfield, another organizer, who grew up in nearby Grand Chain. When he heard onlookers repeatedly use the N-word, Winfield, 21, said he kept his eyes fixed on the ground and marched on. Winfield’s mother has worked for years at a mental health center in Anna. He thought about her, a woman of color, spending her days in a town where some residents still used racial slurs.

Coleman said she wanted the protest to show other residents that “change starts here.” Coleman and her family moved to Anna from Chicago three years ago, she said. She knew what Anna stood for but said she didn’t think much of it until a white customer at the local McDonald’s, where she worked, refused to let her pour his coffee.

Among the marchers, too, was Easter Smith.

I first met Easter in 2018, after a number of Anna residents suggested I speak with her. At the time, Smith and her six children were one of the few black families living in Anna. Her eldest son, Arieh, had won the Illinois state wrestling championship for his weight class. He was elected homecoming king of Anna-Jonesboro Community High School. I wrote about how the family challenged many white residents’ assumptions about black people while quietly struggling to balance their very public status in the community with the private pain of the racism they experienced.

Easter said she has lost some friends in Anna and become more outspoken about her experience there since the story was published. Last week, her family moved about 20 minutes away, to Murphysboro. She said she would have liked to stay in Anna until her children finished school there, but she had trouble finding a comfortable home to rent. She decided to march before she left, she said, because she felt she “needed to see it.”

“How are we going to be one of the first black families and not go to the protest?” Easter said.

Early on during the protest, a speaker, who was white, reminded the crowd of the signs posted around the city limits in Arieh’s honor, a positive contrast to signs long rumored to have once warned black people to be out of town before dark.

Two thoughts struck Easter. The first, she said, was that, as a black person in America, “Normally when your name is called in public, it’s because it’s in memorial.” The second: It “doesn’t take away racism because a black kid holds a title at your school.”

The protest ended peacefully. Police made no arrests. No property was damaged.

The protest was covered across the region and the focus of a Reuters story about small-town Black Lives Matter protests, which was republished by national news outlets.

The headline of a story in the Southern Illinoisan referenced a chant repeated at the protest: “Ain’t No Negativity Allowed,” a new, positive twist on A-N-N-A.

Miller, the City Council member, said he’s thinking about making yard signs for residents with the slogan. Everybody is welcome in Anna, he said.

I asked him what he thinks can be done to show that beyond the protest.

“It’s our responsibility to change everything that is going on around here,” Miller said. “If people were more just willing to talk to other people, things would change so much quicker.”

I asked some of the organizers, too, whether Anna still deserves A-N-N-A.

Moore didn’t think so, though she said, “There are people in Anna that still give Anna the name it has.”

But Coleman disagreed. The town is still A-N-N-A, she said.

“The people in the town have to change in order for that to change. They have to make it mean something else,” Coleman said. “They have to not be racist.”

But, she added: “Change starts somewhere, and if a group of teenagers have to be the ones to do it, so be it.”