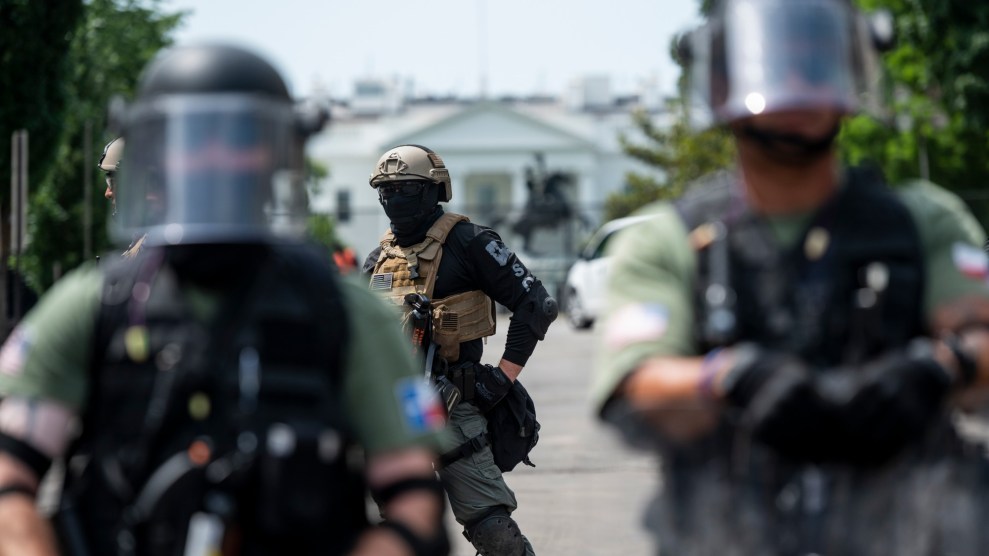 Over the past few days, Mother Jones and other media outlets have noted the presence of armed personnel with no visible identification confronting the protests in DC that were sparked by the recent police killing of George Floyd. These officers have consistently said that they are “with the Department of Justice” or that they are part of the “federal government.”

The Justice Department has since said these are officers are from Special Operations Control units in the Bureau of Prisons—that is, officers trained primarily to quell prison riots.

In response, Democrats in both chambers said Wednesday they would introduce legislation requiring uniformed federal officers doing domestic security work to identify what agency or military branch they represent. Several shared a photo I took on Tuesday.

I will be introducing legislation to require uniformed federal officers performing any domestic security duties to clearly identify what military branch or agency they represent. pic.twitter.com/2kaFAlWUow

This picture really troubles me. Armed forces in the nation’s capital, appearing to have been stripped of all badges and name tags—making them totally unaccountable to the people—is something I’d expect to see from a dictatorship, not a democracy. https://t.co/KBLPa9nhUI

Unacceptable for uniformed federal officers policing constitutionally-protected assemblies to refuse to identify themselves to people who pay their salaries.

Denying accountability to the public they serve ensures abuses.

I'm working on legislation to stop this.
More to come. https://t.co/1rF8Q0Pqxr

In a letter Thursday to President Donald Trump, House Speaker Nancy Pelosi (D-Calif.) requested a list of the agencies involved in responding to protests in DC and an explanation of the roles different troops and law enforcement agencies are fulfilling. Pelosi also blasted the deployment of officers without clear identification. “The practice of officers operating with full anonymity undermines accountability, ignites government distrust and suspicion, and is counter to the principle of procedural justice and legitimacy during this precarious moment in our nation’s history,” she wrote.

She noted that the Justice Department has previously warned local police departments against allowing officers to work anonymously.

Michael Carvajal, the acting BOP director, addressed this criticism in a news conference on Thursday, saying he was not aware of officers being ordered not to identify themselves, and stated the issue was that “within the confines of our institutions and we don’t need to identify ourselves. Most of our identification is institution-specific and probably wouldn’t mean a whole lot to people in DC.”

But, he said: “I probably should have done a better job of marking them nationally as the agency. Point is well taken.”

Barr, however, was not so conciliatory. In the same press conference Thursday, he defended the use of BOP personnel and said they have “emergency response” training—nevermind that the officers are now confronting peaceful protesters. The attorney general did not acknowledge any problem with using officers who can’t be identified to police protests.

“In the federal system, the agencies don’t wear badges with their names and stuff like that,” Barr said. “I could understand why some of these individuals simply wouldn’t want to talk to people about who they are, if that in fact was the case.”

Barr declined to elaborate. And Justice Department spokeswoman Kerri Kupec and the BOP’s press office did not respond to specific questions about the legal authority of BOP in Washington and about the number of officers deployed.

Unsurprisingly, Barr’s comments aren’t going down well with Democratic lawmakers. Rep. Don Beyer (D-Va.), one of the members pushing legislation to require officers identify themselves, tweeted: “Last time I checked we don’t do secret police in this country.”