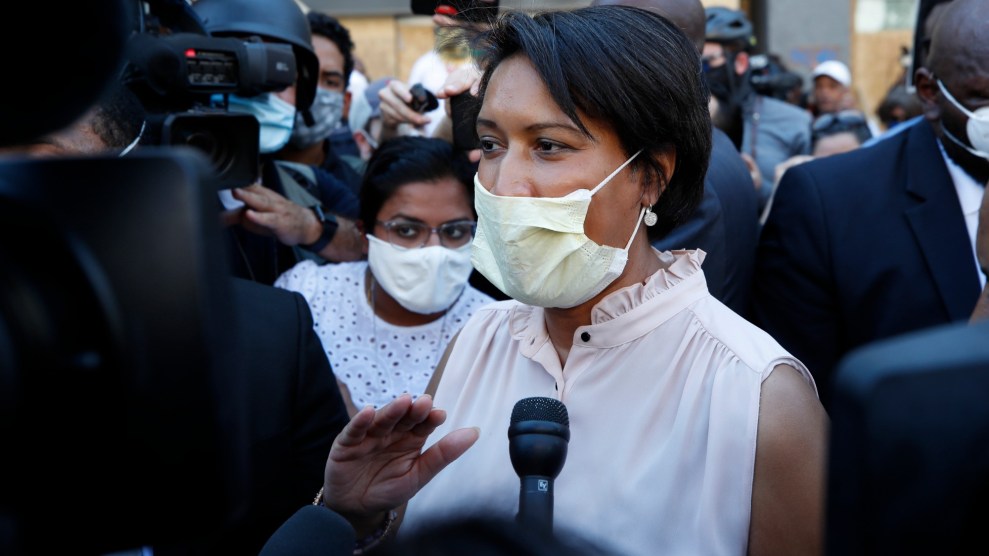 Mayor Muriel Bowser speaks to media on June 3, 2020, near the White House.Alex Brandon/AP

Washington Mayor Muriel Bowser asked Donald Trump on Friday to withdraw thousands of federal law enforcement officers and troops that he summoned to DC to quell protests that erupted in the capital following the police killing of George Floyd.

Bowser also announced an end to DC’s state of emergency related to demonstrations.

I request that @realDonaldTrump withdraw all extraordinary federal law enforcement and military presence from our city. pic.twitter.com/AvaJfQ0mxP

Bowser wrote that the presence of “unidentified federal personnel patrolling the streets of Washington, DC pose both safety and national security risks.” After Mother Jones and other publications highlighted the presence of unidentified law enforcement personnel in the district, the Justice Department said they were special units from the Bureau of Prisons who are trained to quell prison riots. But many demonstrators in DC continue to face federal officers whose names and affiliations are not displayed.

“When citizens are unable to clearly identify legitimate law enforcement officers, it creates unnecessary risk for both protectors and officers,” Bowser wrote, noting that “identifying insignia is mandatory” in the district. (This law does not cover federal officers.)

Bloomberg, citing a summary prepared for the Joint Chiefs of Staff, reported Thursday that there are 7,600 civilian law enforcement, National Guard, and active-duty Army personnel currently in and around DC. That includes 1,704 active-duty troops who are stationed outside the capital at military bases, who have not been deployed to DC streets.

There was no indication that Trump and Attorney General William Barr, who have attributed the lack of looting and violence in DC this week to the massive federal presence, will comply with the mayor’s demand. But already, National Guard troops who have occupied DC streets are apparently departing at Bowser’s request, drawing gripes from Senator Mike Lee (R-Utah).

Just heard that Mayor Bowser is kicking the Utah National Guard out of all DC hotels tomorrow. More than 1200 troops from 10 states are being evicted. This is unacceptable. 1/2

Lee argued that “rioting, looting, arson, and vandalism have all disappeared [because] these soldiers served.” He presumes that because protests that occurred while the guard troops were deployed were peaceful, the troops prevented violence and crime. But Bowser said that the massive numbers of outside law enforcement and military in DC is “enflaming demonstrators” and “adding to the grievances” of peaceful protesters.

It’s impossible to prove either case, but one indication will be what happens when these troops and unidentified federal agents depart.

But Bowser seems newly ready to confront the Trump administration. In a pointed message to federal agencies policing protests, including from helicopters that have hovered over the capital, the district painted “Black Lives Matter” on 16th Street between K and H streets just north of the White House.