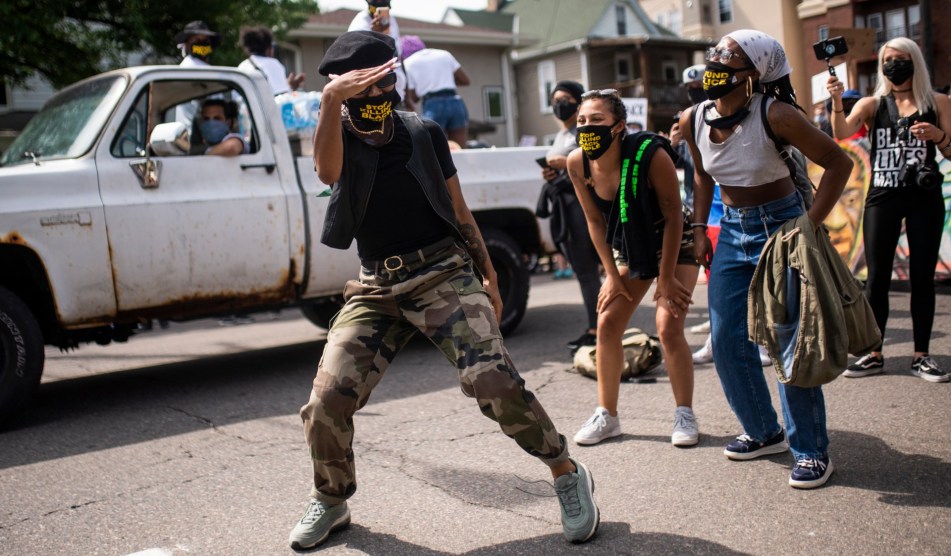 Jubilation doesn’t arise in spite of protest—it’s present at the root. Coverage of this year’s uprisings has rightfully focused on the torrent of police brutality against protesters. But rebellion is also festive. It can be beautiful, joyful, and catchy. As Jewish anarchist Emma Goldman famously wrote about dancing in a revolution, freedom fighters shouldn’t “demand the denial of life and joy.” And as one organizer in Lexington, Kentucky, put it recently, “Black joy is a state of resistance.”

People claiming their power have marched to brass bands in New Orleans, danced after curfew in Oakland, and chanted “fuck these racist-ass police” over techno beats in Detroit. We’re watching in real time as each city shows how it demands and celebrates the movement’s growing triumphs. Here are a few of our favorites:

WE LOVE THIS FUCKING CITY! Detroit is the birthplace of techno and techno is BLACK 🖤 #BlackLivesMatter pic.twitter.com/fJTSmGH1nK

Detroit is a lot of things, but it doesn’t get enough credit as the birthplace of techno music. Just like Diana Ross and Stevie Wonder (and yours truly), techno is from Detroit and techno is Black—despite what the dance floors of Europe would have you think. How fitting, then, for techno to serve as the score to remix a chant about police brutality as protesters marched through the city proclaiming the importance Black lives. Motown music has always been movement music, and techno is no exception. —Camille Squires

The “You about to lose your job” song is already on the streets You love to see it pic.twitter.com/Q4B0WcdJC9

OK, so this was actually filmed in February. But iMarkkeyz—the DJ behind the Cardi B coronavirus remix we were all singing two months ago—was prescient in auto-tuning Johnniqua Charles’ takedown of the security guard detaining her outside a South Carolina club, because “you about to lose yo’ job” has since been bumped in the streets of Minneapolis and weaponized against cops, mayors, and the president. —Delilah Friedler

When I lived in New Orleans, I never went to a protest march that didn’t feel like a parade. The city has always danced through its pain—residents celebrated Mardi Gras six months after Hurricane Katrina, and are famous for mirthful jazz funerals. Their response to the uprising is no exception; these protesters reveled in the French Quarter. —Delilah Friedler