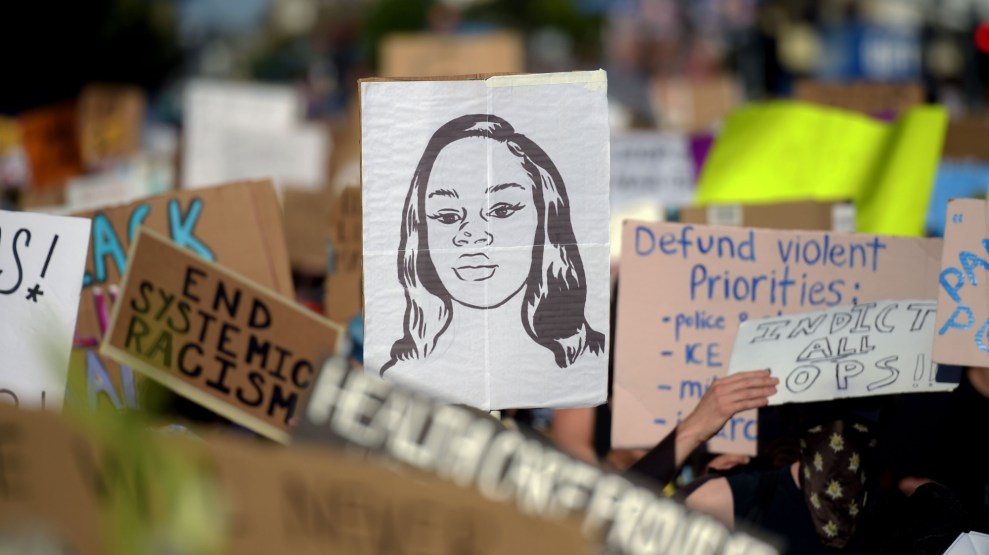 Since landing in Orlando as part of the NBA’s return to play, Philadelphia 76ers forward Tobias Harris has spoken to the media about precisely one thing: “Justice for Breonna Taylor.”

During a July 20 press conference, he urged Kentucky Attorney General Daniel Cameron to “arrest the cops and officers involved in Breonna Taylor’s death,” adding, “that is going to be my answer for every question.” Four days later, he confirmed that his postgame interviews—the kind most NBA players routinely go through—would be devoted to justice for Taylor. “Brett Hankison, Jonathan Mattingly, and Myles Cosgrove need to be held accountable, and we need justice for Breonna Taylor and I’ll continue to preach that message after every single game,” he said, according to the Philadelphia Inquirer.

Many NBA players participated in racial justice protests in recent weeks and have been adamant about using the return of the NBA season to keep a spotlight on Taylor’s death and police brutality against Black Americans. The NBA plastered “Black Lives Matter” on the game court in Walt Disney World in Orlando, where the professional basketball league is finishing its coronavirus-shortened season. The NBA also approved 29 statements, such as “Say Their Names” and “I Can’t Breathe,” for players to wear on their jerseys in Orlando once official games begin next week.

But the most powerful advocacy has come from players who have used their platform in interviews to keep the focus on Taylor. Marcus Smart of the Boston Celtics told reporters on Friday after a scrimmage, “Before we start, guys, my answer is just going to be ‘justice for Breonna Taylor’—that’s going to be my answer for everything.”

The WNBA, meanwhile, started its season on Saturday and permitted players to wear Taylor’s name on their jerseys. The league also specifically devoted its opening day game between the New York Liberty and Seattle Storm to honoring Taylor and other victims of police brutality. Before the game, New York’s Layshia Clarendon and Seattle’s Breanna Stewart asked for a 26-second moment of silence in honor of Taylor, who was killed at age 26. Both players are members of the league’s new Social Justice Council, which is driving the league’s advocacy on “race, voting rights, LGBTQ+ advocacy, and gun control,” among other issues.

"All season long, we say her name."

The Liberty and Storm observed a 26-second moment of silence in honor of Breonna Taylor.pic.twitter.com/HLKZ7niF7q

Taylor, an emergency room technician, was killed in March after police officers used a no-knock warrant to enter her Louisville apartment and exchanged fire with her boyfriend, who believed they were intruders. As my colleague Samantha Michaels wrote, “Research shows that Black and Latino people have long been disproportionately affected by these kinds of raids, and tens of thousands more will likely be targeted within the year.”

Even though officer Brett Hankison was fired and reprimanded for “wantonly and blindly” firing 10 shots into Taylor’s apartment, none of the three officers have been arrested for murder. “I can assure you at the end of our investigation, we will do what is right,” Cameron, Kentucky’s top law enforcement officer, told reporters in June. “We will find the truth.”

Taylor’s death gained national attention during the protests following George Floyd’s death in Minneapolis and NBA players have been part of the pressure campaign to hold the Louisville police officers accountable. “As one of the leaders of this league, I want her family to know, and I want the state of Kentucky to know that we feel for her and we want justice,” LeBron James, the Los Angeles Lakers superstar, said Thursday after his team’s scrimmage with the Dallas Mavericks. “What’s right is right, and what’s wrong is wrong.”

CNN reported that several NBA players have been in touch with Taylor’s mother, Tameka Palmer, and have “expressed their support.”