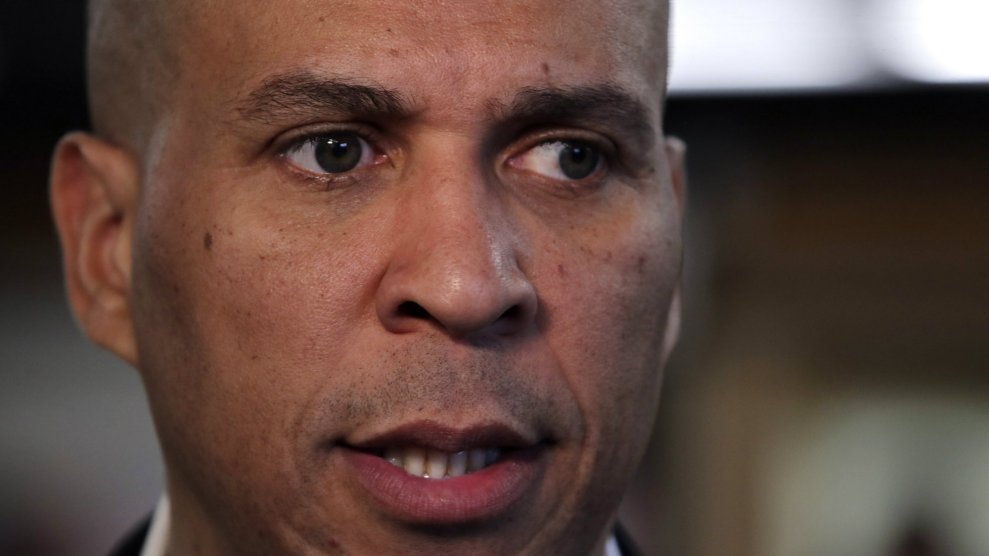 On Wednesday, as the public health crisis caused by the outbreak of the novel coronavirus crisis worsened, Sen. Cory Booker (D-N.J.) introduced a bill that would allow tens of thousands of people currently in federal prisons and jails to be released during the pandemic. His measure attempts to address the needs of a community that has been particularly vulnerable to the virus: the millions of people behind bars. An inmate at the Metropolitan Detention Center in Brooklyn, a federal jail in New York, has already tested positive for the disease, and criminal justice advocates have warned that jails and prisons are the perfect incubators for an outbreak.

“We have an obligation to do everything we can to prevent the spread of this deadly disease,” Booker said in a statement. “That means moving certain incarcerated people to community supervision when they don’t pose a violent threat to our communities and are facing high risk of serious illness or death from COVID-19.” Sen. Kamala Harris (D-Calif.) joined the New Jersey senator as a co-sponsor.

As of Wednesday morning, more than 50,000 people have tested positive for the new coronavirus in the US, with deaths surpassing 700. Both numbers are expected to rise as testing becomes more widespread after serious delays. The illness, which is marked by fever, cough, and shortness of breath in severe cases, is spread by human-to-human contact, but the spread can be contained by frequent hand-washing, avoiding crowded places and standing at least six feet away from other individuals when in public. The Centers for Disease Control and Prevention has been recommending both hand washing and social distancing for weeks, but for incarcerated individuals, those recommendations are unrealistic.

“For thousands of people behind bars, contracting COVID-19 is tantamount to a death sentence,” Booker said. “Those in prison and jail tend to have much higher rates of underlying health issues than the general public, and the conditions of confinement make social distancing virtually impossible.” Prison and jail facilities are notoriously unhygienic, with little access to soap and water. Hand-sanitizer, which can also kill the virus, is contraband because its high alcohol content makes it a potential for abuse. Inmates living in close quarters are the perfect vectors for disease.

The bill calls for the US Bureau of Prisons and the US Marshals Service to immediately place  incarcerated people who don’t pose a threat to public safety on community supervision. It also limits pre-trial detention unless the person is a flight risk or a threat to public safety. The measure attempts to cut back on in-person contact with officers overseeing the release and the use of incarceration for technical violations with supervised release.

Those eligible for supervised release would include anyone in a federal prison or jail who is pregnant, has chronic lung disease or asthma, congestive heart failure or coronary artery disease, diabetes, or other conditions related to a weakened immune system like HIV/AIDS, cancers, or sickle cell anemia. Approximately 33,000 people in federal facilities are age 50 or older and 26,000 of them have not committed violent crimes. The proposal calls for their release.  Finally, those with one year or less left on their sentence would also be eligible to go free under the proposed law.

The bill comes after a group of Democratic lawmakers led by Sen. Elizabeth Warren (D-Mass.) wrote letters earlier this month to the US BOP and the private prison companies it uses as contractors to provide detailed information on how the government and the companies plan to keep inmates and their staff safe. “Thousands of incarcerated people, their family, and friends, and correctional staff move in and out of federal prisons every day,” they wrote. “As a result, the uncontained spread of coronavirus in privately-contracted federal prisons endangers the prison population, correctional staff, and the general public.” The group of lawmakers said they received inadequate responses.

Booker’s legislation would be effective for 60 days after the end date of the national emergency. Those released on community supervision will not have to return to prison once the pandemic is over. And time is of the essence. Coronavirus has already begun to spread in federal prisons and jails.