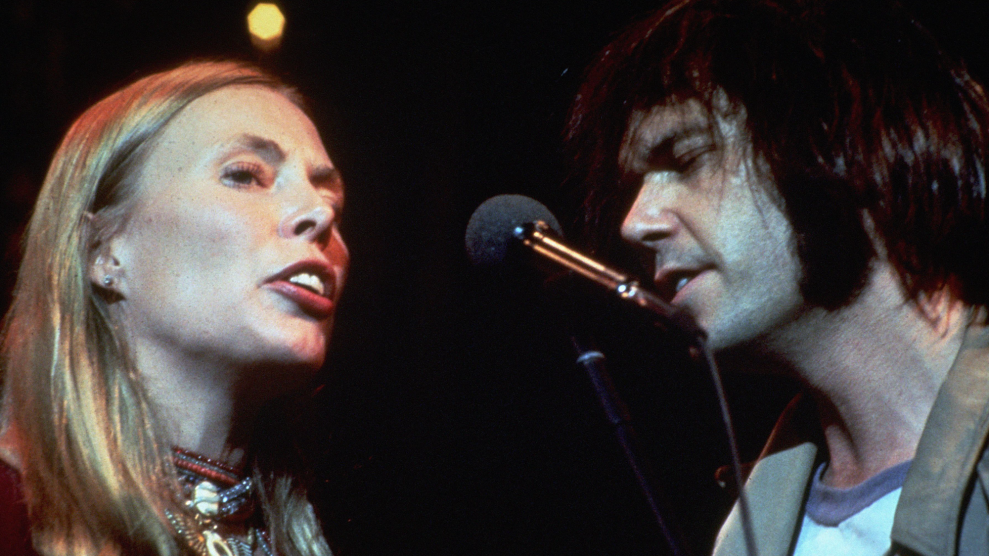 Joni Mitchell and Neil Young in The Last Waltz.Entertainment Pictures/ZUMA

CPAC is no stranger to making headlines. The annual conservative conference hosted outside Washington, DC typically offers the news cycle bite after bite of Trumpian incompetence. This year, though, in addition to letting the country watch Trump kiss an American flag, CPAC also may have helped spread the novel coronavirus. But do not worry! To help keep people occupied while they are stuck at home during the pandemic, CPAC is now promoting a new Spotify playlist—full of the nastiest of liberals and “Crazy Bernie” supporters. They’re calling it: “An Introvert’s Guide to Social Distancing by the CPAC Team.”

The conference became an early symbol for the spread of COVID-19, and was to blame for exposing top political guests like Sen. Ted Cruz (R-Texas) and Trump’s new chief of staff Mark Meadows, who both entered 14 days of self-isolation. As my colleague Stephanie Mencimer, who herself went into quarantine after she reported from CPAC, wrote:

By the time CPAC had started, other countries had already banned large gatherings of more than 5,000 people. The day after it ended, the French even closed the Louvre. But canceling the conference could hardly have been an option for a group of people who were publicly calling concerns over the virus a liberal conspiracy to bring down Trump. Besides, people had paid big money to get a chance to hobnob with Republican elites. The sick man from New Jersey paid nearly $6,000 for a gold-level VIP ticket, a privilege that put him up close and personal with all those government officials now in self-quarantine.

Since it’s now been over two weeks since CPAC, any asymptomatic person who had the sense to quarantine themselves after the conference is in the clear, even though the rest of the country begins lockdown thanks to the ever-increasing infection rate. To help with isolation, the conservative confab put together a Spotify playlist for the moment, according to Fox News personality Sarah Carter.

“You’re bonded with all the people who are at CPAC,” Ian Walters, the group’s communications director, told Carter, “and they’re wonderful people, and we work our tails off and we thought that this was a good way to stay connected with one another, to help with the inevitable cabin fever, and to give people some pleasant music to just think about the important things in life.”

The COVID-playlist generally hews to the type of music you’d expect, evoking the taste of your 78-year-old, Trump-loving, Boomer-great uncle. But it doesn’t hold firm to conservative orthodoxy, and includes plenty of anti-Trump artists. The playlist kicks off with a bop—Clairo’s “Softly.” The track hails from the Bernie supporter’s 2019 debut, and while it isn’t the best track on the album (looking at you “Bags”) it’s a strong start to the playlist. While the playlist also includes a song from Halsey, who just endorsed Bernie a week ago, it features some of the 70’s biggest and baddest music revolutionaries—Joni Mitchell and Neil Young. (Young just performed a digital concert for Bernie.) It also features “Paris in the Rain” by ardent LGBTQ supporter Lauv, Trump disavowers The Chainsmokers, and Beto O’Rourke supporter Leon Bridges.

As someone who’s crafted many a playlist for many a person, there’s no real right or wrong way to pull together a collection of music. This playlist isn’t even awful! But given Trump’s followers penchant for constantly boycotting of anti-Trump celebrities, artists, and companies, it’s a bit of a peculiar list. It also breaks the golden rule of curating music for someone else: know your audience.