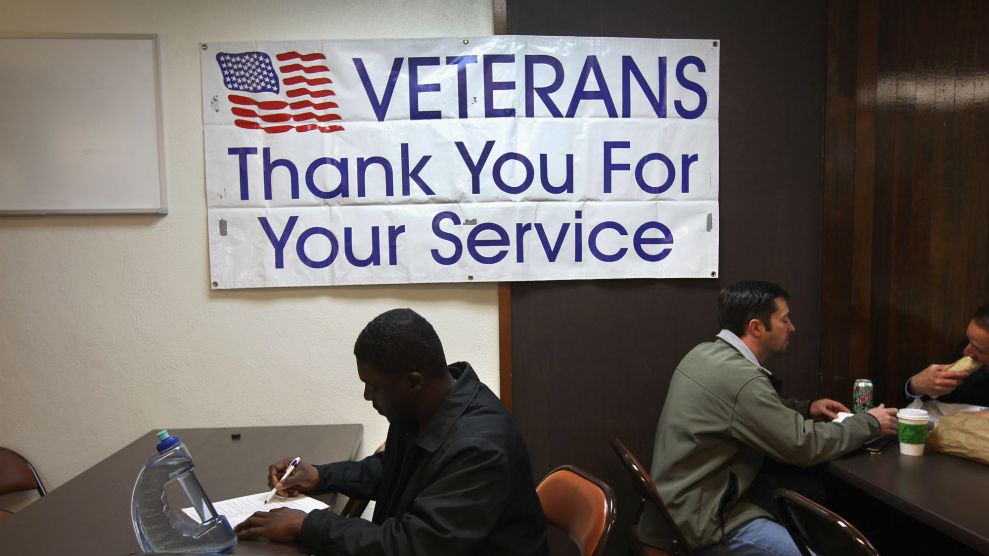 As the coronavirus outbreak spreads to more communities across the United States, the Veterans Administration still has not used roughly 90 percent of its testing kits, leaving many veterans in the dark about whether they have contracted the virus.

The VA has only administered 322 tests nationwide for COVID-19, the disease caused by coronavirus, but has 3,000 tests available for use, Veterans Affairs spokeswoman Christina Mandreucci told me. Like other federal agencies, the VA uses the Centers for Disease Control and Prevention’s guidelines for administering tests, which had been criticized for making it difficult to obtain tests for patients without symptoms unless they had recently been in China or close to a confirmed COVID-19 carrier. These guidelines were implemented at a time when China was the only major country battling a coronavirus outbreak. That is certainly not the case anymore and, earlier this month, the CDC responded by relaxing its guidelines, which now allow doctors to “use their judgment” to determine if a patient should be tested in accordance with new criteria, including whether the patient resides in an area “where there has been community spread of COVID-19.”

The United States has lagged far behind other developed countries when it comes to making tests available; despite discovering its first coronavirus case around roughly the same time as South Korea, the United States has administered only 10 percent as many tests. The VA is far from alone in confronting this problem—state and regional governments have made similar mistakes—but its patients feel the effect of the coronavirus outbreak more acutely as the average American veteran is substantially older than the comparable civilian. Of the 322 tests administered so far, the VA has already confirmed five positive cases, is tracking 33 presumptive cases, and, on Monday, acknowledged the first veteran death linked to coronavirus. How the VA responds to the growing outbreak is key not only for veterans who rely on its health care system, but for civilian patients too, as private hospitals feel the strain of more coronavirus patients. The VA is legally designated as a backup health care system in national emergencies and Dr. Richard Stone, leader of the Veterans Health Administration, told the New York Times earlier this week that “the American people should know we are ready.”

In the past few days, the VA has rapidly increased its pace of testing. On Friday, the department said it had used 140 tests, but by Tuesday, that number was up to 322. VA officials expect roughly 20 percent of patients to test positive for COVID-19 as more tests are completed in next few days, a source familiar with the matter told me. “We expect there to be an uptick very soon when people settle into a routine and start pursuing health care at the VA in greater numbers,” Tom Porter, executive vice president of government affairs for Iraq and Afghanistan Veterans of America, said, echoing the expert view that the coronavirus crisis in the United States will get worse, not better, soon. “I certainly hope the VA is in the right place to be able to respond to this if it gets much bigger.”

Whether the VA is up to the task is an open question. The department still has not filled nearly 50,000 vacant positions—many of them nurses and medical providers—and in February, Secretary of Veterans Affairs Robert Wilkie mysteriously fired his deputy after only five months on the job. During a White House press conference on Wednesday, Wilkie, a member of President Trump’s coronavirus task force, was asked how many veterans “of those who need to be tested” have been tested. “We believe we’ve caught most of them,” Wilkie replied. “Because the president had us out aggressively early, we have been in a better place than most health care systems in the country.”

That sunny assessment is belied by the department’s own recent pleas for help. As part of an emergency request for several federal agencies, the White House asked Congress on Tuesday for $16.7 billion in new funding for the VA. Nearly 80 percent of the funding would go toward the cost of health care, testing kits, protective equipment, and hospital expansion, Politico reported. That funding could augment the VA’s ability to accept civilian patients, and increase its capacity for testing.