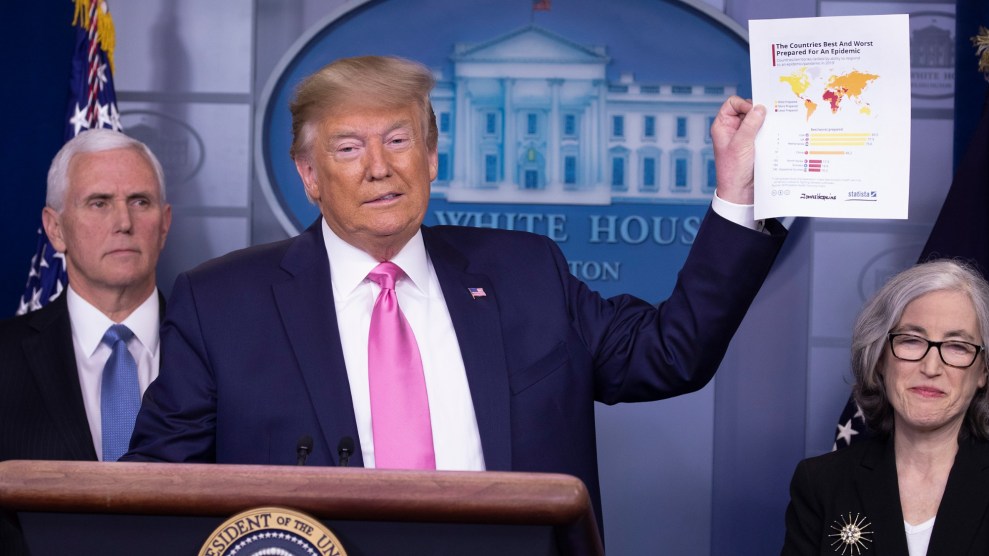 President Trump is many things—businessman, reality TV host, expert on Robert Pattinson’s relationship choices—but one thing he most certainly is not is a medical authority. Remember: This is the same person who refuses to exercise because he thinks it exhausts the body’s finite amount of energy.

With that context, let’s examine the latest piece of dangerous misinformation to emerge from Trump’s Twitter feed:

….be put in use IMMEDIATELY. PEOPLE ARE DYING, MOVE FAST, and GOD BLESS EVERYONE! @US_FDA @SteveFDA @CDCgov @DHSgov

The two drugs Trump is referring to here—chloroquine, which has been used to treat malaria, and an antibiotic known as azithromycin—have been floated as possible ways to fight COVID-19, but not without significant reservations. Despite the president’s tagging of the Food and Drug Administration and its commissioner, neither drug has been approved by the federal government to treat the virus. When used in conjunction with other medication or in the wrong dosage, taking them can be devastating. In China, officials recommended the use of chloroquine in February after some promising trials, but after a researchers in Wuhan discovered that doubling a daily dose of the drug could lead to death, China quickly “cautioned doctors and health officials about the drug’s lethal side effects and rolled back its usage,” Bloomberg reported. The AFP wire service has reported that social media messages pushing chloroquine have circulated widely in Nigeria, and that health officials there have seen cases of poisoning from the drug.

Those notes of caution have not prevented Trump and some of Twitter’s loudest voices from pushing the untested drugs. Tesla’s chief executive, Elon Musk, drew widespread attention to one of the drugs on Monday when he tweeted, “Maybe worth considering chloroquine for C19.” But Trump has quickly became the drug’s most prominent booster, after falsely saying at a Friday White House press briefing that it had been approved. That mention prompted considerable angst from Dr. Anthony Fauci, director of the National Institute of Allergy and Infectious Diseases, who cautioned that Trump while “feels optimistic about something,” he, as a doctor, was only saying “it may be effective.”

All the talk about chloroquine has led to shortages, the New York Times reported, leading to problems for patients who were already taking it for other conditions like lupus and rheumatoid arthritis. “There is a run on it and we’re getting calls every few minutes, literally, from patients who are trying to stay on the drug and finding it in short supply,” Dr. Michael Lockshin, of Manhattan’s Hospital for Special Surgery, told the newspaper.

Even the evidence Trump cited on Twitter is far from definitive. On Twitter, Trump referred to a study released by French researchers earlier this week that suggested that the drug combination could be effective at treating COVID-19. But the study only looked at 20 patients. As several experts have noted on Twitter. Without more verified information, it’s irresponsible for patients to view these drugs as a fail-safe solution to the virus.

Please don't take hydroxychloroquine (Plaquenil) plus Azithromycin for #COVID19 UNLESS your doctor prescribes it. Both drugs affect the QT interval of your heart and can lead to arrhythmias and sudden death, especially if you are taking other meds or have a heart condition.

To let Trump, who once promoted a fraudulent university and spent weeks downplaying and ignoring the threat of coronavirus, suddenly become a reliable source of consumers’ medical information is irresponsible. Listen to the experts. Ignore the bloviating tweets. And, for gosh sakes, practice social distancing!