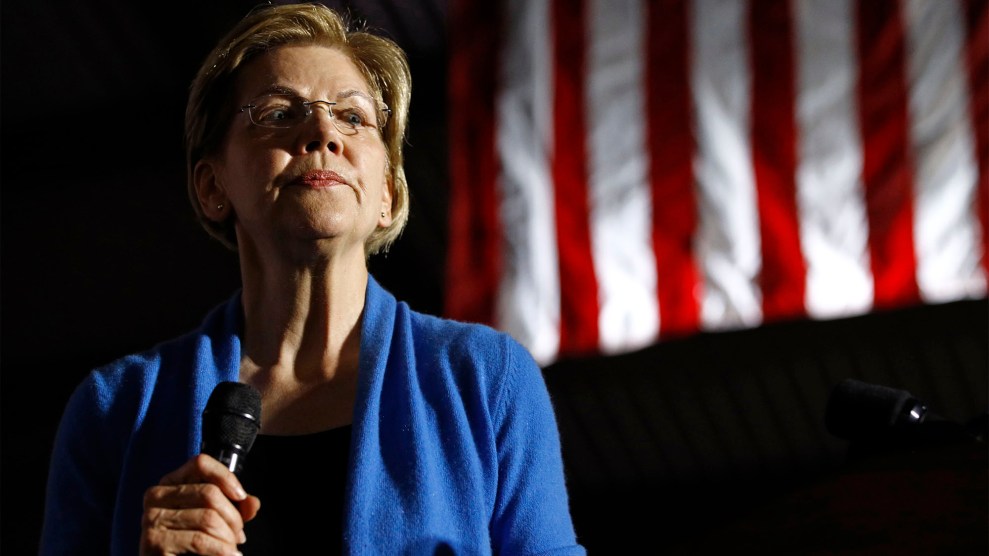 In recent days, Wisconsin has been thrown into political chaos, with the state’s Democratic governor pushing to delay Tuesday’s election amid rising cases of the coronavirus, and Republican leaders in the legislature refusing to either postpone voting or mail a ballot to every registered voter. On Monday, the state Supreme Court blocked a late executive order from Wisconsin’s governor that would have delayed the election, and the US Supreme Court, in a 5 to 4 decision, overturned a lower court order that would have extended absentee balloting. As a result, thousands of voters could be disenfranchised and the others left in a perplexing and potentially dangerous mess.

“Republicans are using the crisis to accelerate an undemocratic power grab.”

Sen. Elizabeth Warren (D-Mass.) wants to make sure such a scenario never happens again. Today, Warren is releasing a new plan—shared in advance exclusively with Mother Jones—that calls for a series of provisions in Congress’ next coronavirus recovery package that would protect voters’ ability to safely cast a ballot during the pandemic. The proposals would require states to mail a ballot to every registered voter with a prepaid return envelope, as is standing practice in states like Oregon and Washington; outline $4 billion in federal funding to help states transition to universal vote-by-mail before November (10 times what Congress allocated in its first recovery package); and say states should refrain from removing voters from registration rolls unless they can prove the person has moved or died since it will be very difficult for anyone removed to reregister during the outbreak.

“In this moment, when peoples’ lives and livelihoods are on the line, it’s powerfully important that we protect our right to hold government and elected officials accountable at the ballot,” Warren told me. “What’s happening in Wisconsin is another clear signal to Congress that it must immediately pass much-needed reforms and equip states with the funding they need to protect the health and safety of voters, ensure our elections proceed during this pandemic, and secure our electoral institutions for the long haul. That’s what my plan is about.”

Her plan comes as a rebuke to recent statements by President Trump, who said on Friday that he opposed mail voting—even though he himself requested an absentee ballot to vote in Florida’s March primary—because “a lot of people cheat with mail-in voting,” and reiterated his support for requiring voter ID. The week before, Trump said that if voting reforms Democrats had suggested be included in the first recovery package were adopted, “you’d never have a Republican elected in this country again.” The Trump campaign and the Republican Party are planning a legal onslaught to oppose efforts to expand voting during the pandemic.

“We must not allow Republicans to exploit the pandemic to engage in voter suppression when people are least equipped to fight back because they are staying home, caring for loved ones, or struggling to make ends meet—and many government offices are closed,” Warren wrote in a post detailing the plan. “Republicans are using the crisis to accelerate an undemocratic power grab and disenfranchise millions.”

To prevent looming disenfranchisement, Warren is pushing for legislation that require states to ban onerous requirements, like ones in Wisconsin that require voters to include a copy of a government-issued photo ID with their mailed-in ballot and find a witness to observe them signing their ballot. The plan also calls for a major infusion of funding for the United States Postal Service to handle huge numbers of mailed ballots; she also envisions tools that would allow citizens to track their ballots to make sure votes are counted and reduce the possibility of fraud.

In recognition that not everyone will be able to vote by mail or feel comfortable doing so, Warren also is calling on every state to set up 30 days of in-person early voting to help avoid lines and large gatherings on Election Day. Poll workers should receive hazard pay, she says.

The plan builds off earlier efforts by Sens. Amy Klobuchar (D-Minn.) and Ron Wyden (D-Ore.) to help states expand vote-by-mail and early voting in the face of the virus’s spread. The efforts are part of a growing push from congressional Democrats to adopt major voting reforms in time for November’s general election. House Speaker Nancy Pelosi said last week that the next economic stimulus bill should include more money to help states vote by mail; some progressives have said such steps should be a nonnegotiable demand.

“Donald Trump’s opposition to making it easier for Americans to vote isn’t about keeping voters safe or protecting our electoral systems from security threats, it’s about trying to suppress the vote,” Warren said. “That’s not how our democracy should work. It is Congress’ responsibility to step up and ensure that every eligible American can exercise their right to vote without fearing for their health. That’s as basic as it gets.”