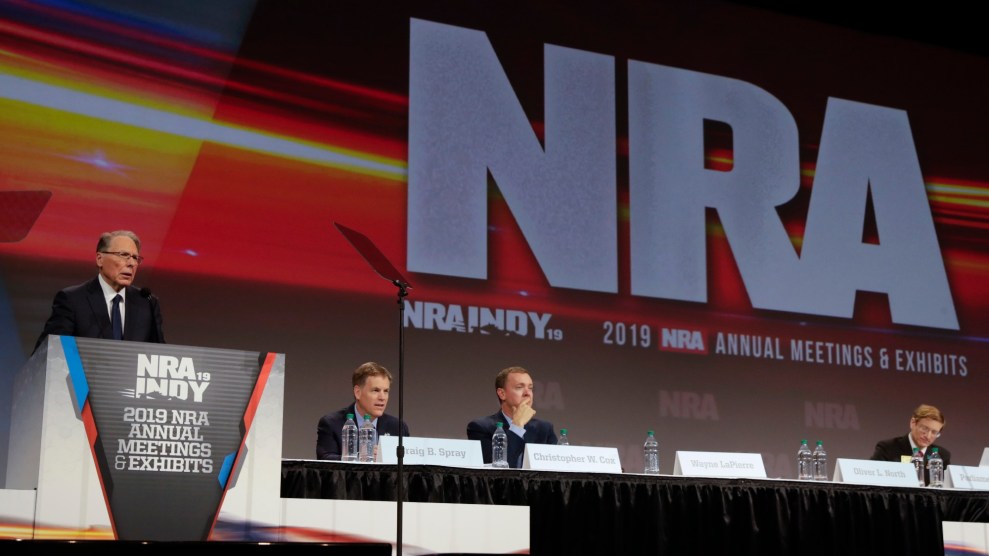 Mass layoffs have hit the National Rifle Association because of the economic fallout from the COVID-19 pandemic. According to Politico, more the 60 NRA employees have been laid off in recent weeks, after the group was forced to cancel its annual meeting—a massive event that usually results in millions of dollars in revenue from attendance fees and fundraising.

The layoffs come even as sales of firearms surge—due in part to the NRA’s efforts to pressure state and local governments to allow gun stores to remain open during the crisis. While most businesses are closed indefinitely as part of the effort to slow down the spread of the coronavirus, many states have issued orders allowing gun stores to keep operating. On March 28, the Trump administration released guidance on essential and critical businesses that should remain open, which included gun stores in the same category as grocery stores and pharmacies. The guidance came after much behind-the-scenes lobbying from the NRA and other players in the gun lobby.

Even as the NRA was working overtime to fulfill its mission—filing lawsuits against states to keep gun stores open—it was feeling the full effect of the economic strain caused by the pandemic. Late last month, NRA chief executive Wayne LaPierre told the group’s board of directors that there would be layoffs and pay cuts. LaPierre said he would also be taking a pay cut, NPR reports, but it was not known by how much.

Before the coronavirus crisis hit, the NRA was in a tough financial situation. Since the group’s historic financial effort to help elect Donald Trump to the presidency, the NRA has struggled, spending more money than it was raising, as internal scandals—involving infighting within its leadership, excessive spending, and questionable financial transactions relating to members of its board—turned public. All the while the group has been involved in several expensive legal battles that have drained its financial resources, including a particularly costly one with its former advertising firm, Ackerman McQueen.

Despite the layoffs, the NRA still appears to be moving full steam ahead in its fight to keep gun stores open throughout the pandemic. On Monday the group released a new video ad featuring Charlie Daniels—the country music star and NRA member—arguing that antigun politicians are using the pandemic to push gun control agendas. “I’d fight to my last breath to defend my home and my family,” Daniels says in the video. “And by the looks of the lines at the gun stores lately, it looks like an awful lot of other people feel the same way.”