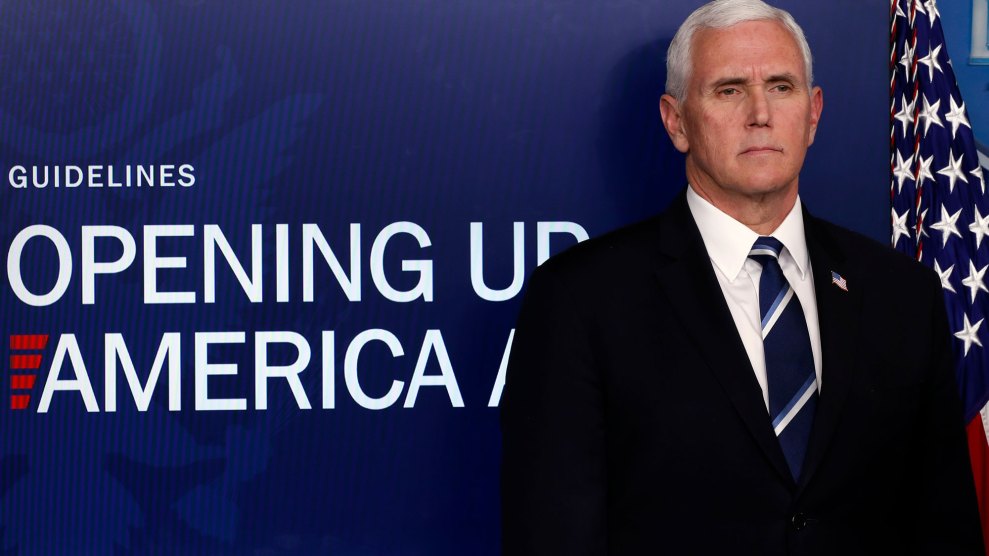 “What you see, I think, among millions of Americans who have been embracing those social-distancing measures and making the sacrifices, is they want their governors to find a way to responsibly and safely reopen their state economies,” Pence told Fox News’ Chris Wallace on Sunday.

After Wallace noted that demonstrators had been protesting the federal government’s very own guidelines, Pence told Wallace that “the American people know that no one in America wants to reopen this country more than President Donald Trump.”

A new NBC News/Wall Street Journal poll showed that most Americans, like most public health experts, are worried that the country will loosen social-distancing restrictions too quickly. (However, just 39 percent of Republicans polled were concerned about the country opening up too soon.)

WATCH: Why is President Trump trying to undermine guidance for states on social distancing with tweets about "liberating" Minnesota and Michigan? #MTP #IfItsSunday@VP: "The president has made it clear — he wants to reopen America." pic.twitter.com/s39u5tQPzI

Pence’s appearance came after a day after a protest near the state capitol in Austin, Texas, featured a slew of MAGA-hats, conspiracy theory mudslinging, and chants ranging from “Let us work!” to “Fire, Fauci.” That demonstration was one of several right-wing protests in places like Michigan and Maryland that echoed the culture-war battles of the tea party era. In a Saturday afternoon press briefing, Trump defended his tweets by saying that, in some cases, governors had “gotten carried away” with shelter-in-place orders.

Pence also noted on Fox News Sunday that the 150,000 COVID-19 tests conducted per day in the United States were “sufficient for any state in America” to begin lifting restrictions. He added that, to double efforts to 300,000 a day, it would require governors to “activate all of the laboratories in their states around the country that can do coronavirus testing.” The problem is that the United States has been doling out fewer tests per capita than several other developed countries.

Pence’s optimism encountered significant pushback from governors on both ends of the aisle on Sunday. “To try to push this off, to say that the governors have plenty of testing and they should just get to work on testing—somehow we aren’t doing our job—is just absolutely false,” Republican Maryland Gov. Larry Hogan told CNN. And Democratic Virginia Gov. Ralph Northam slammed the idea that states have enough testing capacity as “just delusional.”