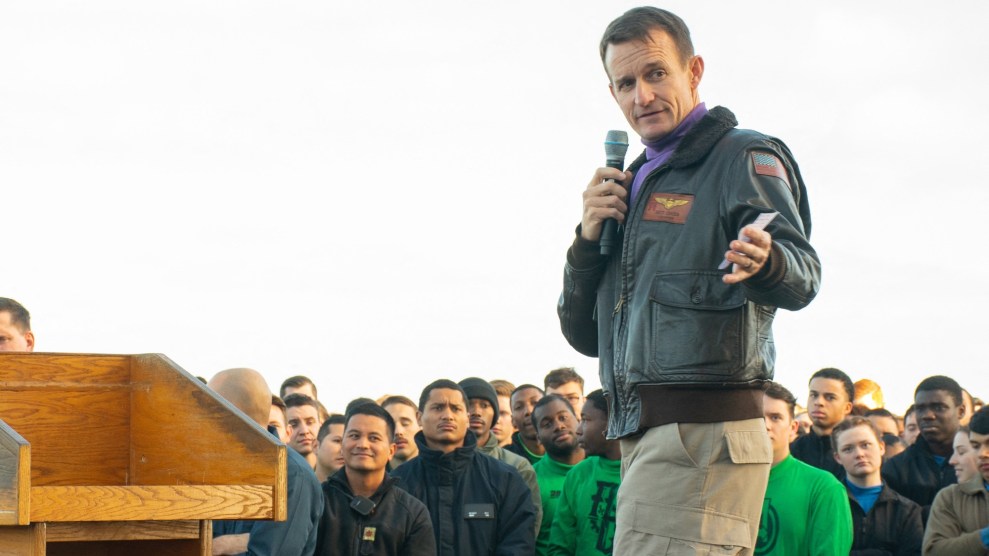 On Monday, Captain Brett Crozier of the USS Theodore Roosevelt dashed off a four-page letter to his superiors detailing the frightening conditions on his ship, where dozens of sailors had become ill with COVID-19. Because of the confined nature of the aircraft carrier, Crozier said in stark terms that his crew would be unable to safely quarantine infected sailors, a situation that increased the chances of the virus spreading to others. He said 90 percent of the sailors needed to disembark in Guam, where the ship was docked, or risk further infections. “The current plan in execution on TR will not achieve virus eradication on any timeline,” he wrote.

Hours later, the San Francisco Chronicle published excerpts from Crozier’s letter. By Thursday, he had been relieved of his command. The Navy offered no detailed rebuttal of his letter. In describing his reasons for firing Crozier, acting Navy Secretary Thomas Modly sounded at times more like he was giving him a promotion than relieving him of command. “Captain Crozier is an honorable man who, despite this uncharacteristic lapse of judgment, has dedicated himself throughout a lifetime of incredible service to our nation,” Modly told reporters on Thursday. “And he should be proud of that.”

So what did Crozier do wrong? Here’s how Modly explained it:

The letter was sent over non-secure, unclassified email even though the ship possesses some of the most sophisticated communications and equipment in the fleet. And it wasn’t just sent up the chain of command. It was sent and copied to a broad array of other people. It was sent outside of the chain of command. At the same time, the rest of the Navy was fully responding. Worse, the captain’s actions made the sailors, their families, and many in the public believe that his letter was the only reason help from our larger Navy family was forthcoming, which was hardly the case.

That explanation makes it seem like the Navy’s primary problem was not with Crozier’s choice of words, but his method of delivery. Instead of contacting his superiors discreetly, he wrote a memo that—intentionally or not—could have been leaked. Or he leaked it himself. The Navy wasn’t too clear on that, either.

Earlier in the press conference, Modly took time to note specifically that the Chronicle is Crozier’s “hometown newspaper,” but when pressed later over whether he believed that Crozier leaked the letter, Modly demurred. “I don’t know. I don’t think I’ll ever know who leaked the information,” he said, adding that Crozier “sent it out pretty broadly. And in sending it out pretty broadly, he did not take care to ensure that it couldn’t be leaked.”

The Navy is in the midst of one of the more serious peacetime crises in its history, after already enduring turmoil in its top ranks. Modly, formerly the No. 2 civilian in the department, only took over in November after the Navy’s last civilian leader, Richard Spencer, was ousted for insubordination in a convoluted chain of events surrounding President Donald Trump’s intervention in the case of disgraced Navy SEAL Eddie Gallagher. Crozier had racked up several major awards for outstanding service since graduating from the United States Naval Academy in 1992 and seemed to clearly hold the support of his crew. A video circulating online of him leaving the Roosevelt to cheers from his sailors is one piece of evidence for that. Even Modly acknowledged that Crozier was beloved.

Given the tenuous time and Crozier’s obvious track record, shouldn’t there be a stronger argument for firing him beyond the fact that his letter reached too many people?

“I have no doubt in my mind that Captain Crozier did what he thought was in the best interests of the safety and well-being of his crew. Unfortunately, it did the opposite,” Modly said. “It unnecessarily raised alarms with the families of our sailors and marines with no plan to address those concerns. It raised concerns about the operational capabilities and operational security of that ship that could have emboldened our adversaries to seek advantage. And it undermined the chain of command who had been moving and adjusting as rapidly as possible to get him the help he needed.”

Rather than raise unnecessary concerns among families, it seems that Crozier’s memo accurately reflected their fears. One mother of a sailor on board the Roosevelt who tested positive for COVID-19 told the Washington Post that the captain’s “letter touched on all the points that us, as family members, were feeling.” The parent of another sailor under Crozier’s command told the Post he “is a hero” who cares “tremendously for the well-being of my daughter and all her shipmates on board TR.”

Even if Navy officials were already responding to Crozier’s concerns in private, their urgency clearly did not match what he felt was necessary. On Tuesday, Modly outlined a possible reason for this in an interview with CNN. “We have been working actually the last seven days to move those sailors off the ship and get them into accommodations in Guam,” he said. “The problem is that Guam doesn’t have enough beds right now and we’re having to talk to the government there to see if we can get some hotel space, create tent-type facilities.”

But in that same interview, he also said Navy leaders “don’t disagree” with Crozier’s assessment of the threat posed by COVID-19. By Thursday, when speaking with reporters to justify his decision to fire Crozier, Modly seemed to reverse that support. This time around, he said, Crozier’s letter “misrepresented the facts of what was going on on the ship.” When asked to cite a specific example, Modly said, “Well, you raise a particular level of alarm when you say 50 people on the crew are going to die. No one knows that to be true. It does not comport with the data we have.”

Crozier’s advice to remove sailors quickly from the ship was ultimately heeded. On Wednesday, the Navy announced a plan to remove more than half of the sailors off the ship. In announcing that decision, Modly and Admiral Michael Gilday, the chief of naval operations, acknowledged a possible misunderstanding with Crozier. “The misunderstanding perhaps was the requirement of the speed to get people off the ship,” Gilday said. “In order to act on a requirement, we have to clearly understand the requirement.”

Crozier’s letter could not have made the timeline more apparent. “Decisive action is required,” he wrote. “Keeping over 4,000 young men and women on board the TR is an unnecessary risk and breaks faith with those Sailors entrusted to our care.”

The only thing decisive about the Navy’s response was the speed with which it fired Crozier.

Guy Snodgrass, a former Pentagon official under Defense Secretary James Mattis who served with Crozier on the USS Ronald Reagan, said his firing “sets the Navy back significantly as a professional organization, losing trust with both the American public and Sailors.” High-profile Democrats have also latched on to Crozier’s ousting as an example of the Navy’s failure to properly address the accelerating coronavirus crisis among its ranks. In a statement to Reuters, Joe Biden said, “Donald Trump’s Acting Navy Secretary shot the messenger—a commanding officer who was faithful to both his national security mission and his duty to care for his sailors.” Tommy Vietor, an Obama administration national security official who co-hosts the popular liberal podcast Pod Save America, said on Twitter that it was “moving” to watch Crozier’s sailors wish him well, “but infuriating to know that he was fired for refusing to whitewash the disastrous coronavirus response.”

The Navy, in the meantime, expects there will somehow be no deleterious impact stemming from Crozier’s firing. “I trust that it won’t have a chilling effect,” Modly said. “I hope this will reinforce the fact: We have the proper way of handling this.” When time is running out in a crisis of unexpected magnitude, Captain Brett Crozier’s story raises the question of how proper that process really is.