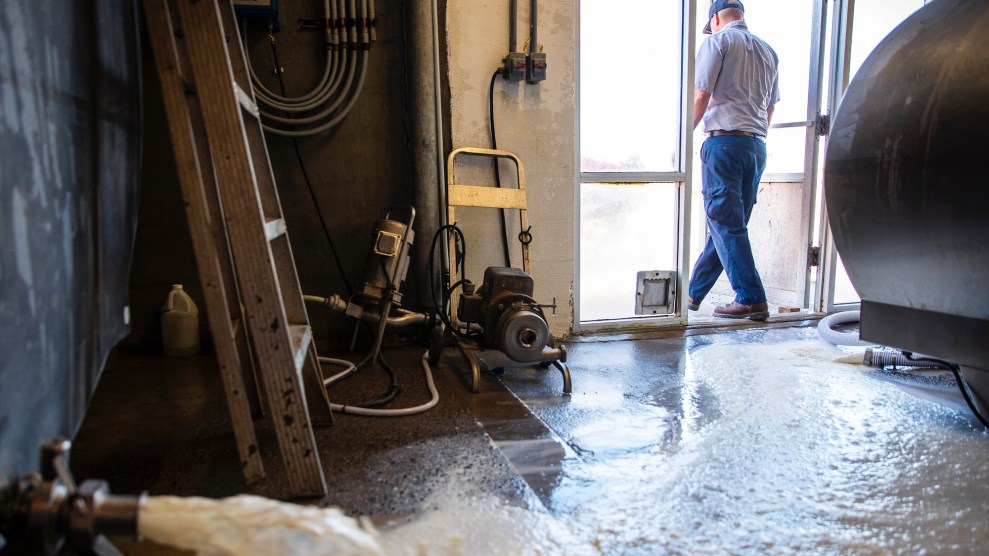 Ricky Jones, operations manager at Magic Valley Quality Milk Transport, walks out the door as 4,100 gallons of milk pour down the drain Wednesday, April 8, 2020, at the Azevedo Family Dairy in Buhl. With restaurants across the country closed, milk processors have lost a significant chunk of their market, leaving dairy farmers with no one to take their milk. Pat Sutphin/AP

When social-distancing measures put the US restaurant industry on ice last month, the farmers who supply it saw a massive market suddenly vanish—and many had to let perfectly good food go to ruin. (In non-pandemic times, Americans spend more than half of their food dollars of meals prepared outside the home.) Meanwhile, the unprecedented spike in unemployment made millions of people unsure of where their next meal would come from, causing huge lines at food pantries nationwide.

On Friday, US Department of Agriculture secretary Sonny Perdue announced a program to address both issues at once—one I suggested a week ago (although I doubt the former governor of Georgia is a Mother Jones reader). Attending President Donald Trump’s daily coronavirus press conference, Perdue announced that the USDA would buy $3 billion worth of “fresh produce, dairy, and meat products,” to be “distributed to Americans in need for food-bank networks, as well as other community and faith-based organizations.”

Perdue didn’t mention in it the press conference, but in statement emailed to journalists Friday, the USDA announced the purchases would be delivered to food banks in “pre-approved boxes of fresh produce, dairy, and meat products.” The release offered no details about the boxes. It’s unclear whether the administration plans use this new program to test out the idea of replacing cash food aid with pre-packed “harvest boxes”—a concept widely reviled by anti-hunger advocates as inefficient and disrespectful of recipients.

On top of the food purchases, Perdue added, the USDA will spend $16 billion “in direct payments to farmers, ranchers and producers who experienced unprecedented losses during this pandemic,” Perdue added. He offered no details on how the department would decide which farmers qualify for the payments. During Trump’s trade wars in 2018 and 2019, the administration handed a total of $8.6 billion in direct payments, mainly to soybean growers who had seen exports to China plunge because of high tariffs imposed by China. An analysis by Environmental Working Group found that 10 percent of recipients—many of them wealthy owners of large farms—received more than half of the allotted funds.