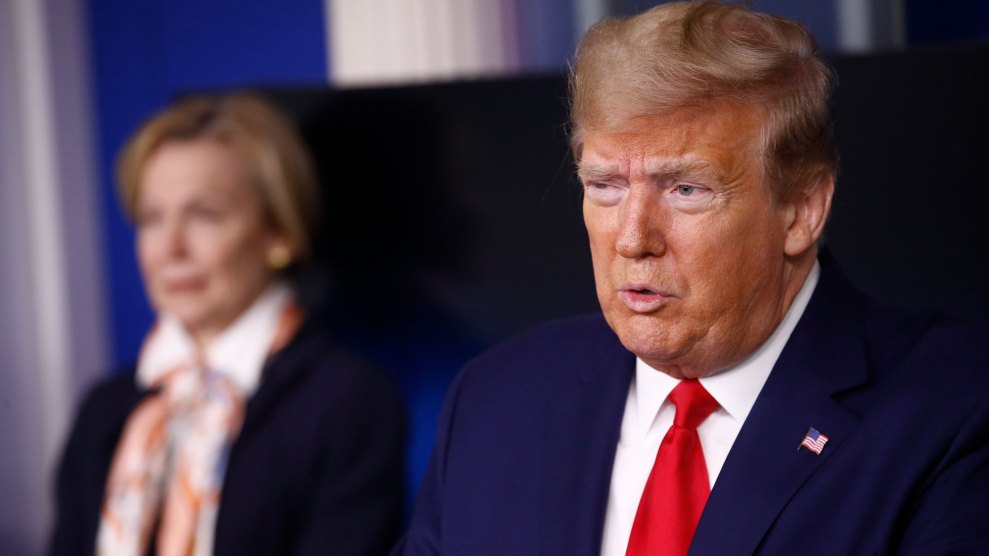 In recent weeks, President Donald Trump has shifted his ire toward the World Health Organization for “severely mismanaging and covering up” the coronavirus pandemic, even claiming that the agency “pushed China’s misinformation about the virus.” But the Washington Post reported Sunday that there were US researchers and public health experts working within the WHO who were updating the Trump administration on the situation in China as COVID-19 ravaged the country—poking holes in Trump’s charges that the WHO was protecting Chinese interests.

A number of CDC staffers are regularly detailed to work at WHO in Geneva as part of a rotation that has operated for years. Senior Trump-appointed health officials also consulted regularly at the highest levels with the WHO as the crisis unfolded, the officials said.

The presence of so many U.S. officials undercuts President Trump’s charge that the WHO’s failure to communicate the extent of the threat, born of a desire to protect China, is largely responsible for the rapid spread of the virus in the United States.

Last week, Trump announced that the United States would freeze aid toward the international health agency for 60 days. At a briefing at the White House’s Rose Garden, Trump fixated on the fact that WHO officials didn’t obtain coronavirus samples from Chinese officials and that the organization “failed to investigate credible reports that conflicted directly with the Chinese government’s official accounts.” The move to freeze aid drew broad criticism from Democrats and international allies.

On Sunday, when asked whether Trump’s anger toward the WHO was warranted, Dr. Deborah Birx told ABC This Week that, when a pandemic arises, the burden was on “the first country that gets exposed to the pandemic that has a—really, a higher moral obligation on communicating, on transparency, because all the other countries around the world are making decisions on that.”

Pressed on whether Pres. Trump halting funding to the WHO over the COVID-19 pandemic is fair, Dr. Deborah Birx says the first country with infection has "higher moral obligation" to communicate: "That's something we can look into after this is over." https://t.co/UqxIk3URcE pic.twitter.com/180jREYjIO