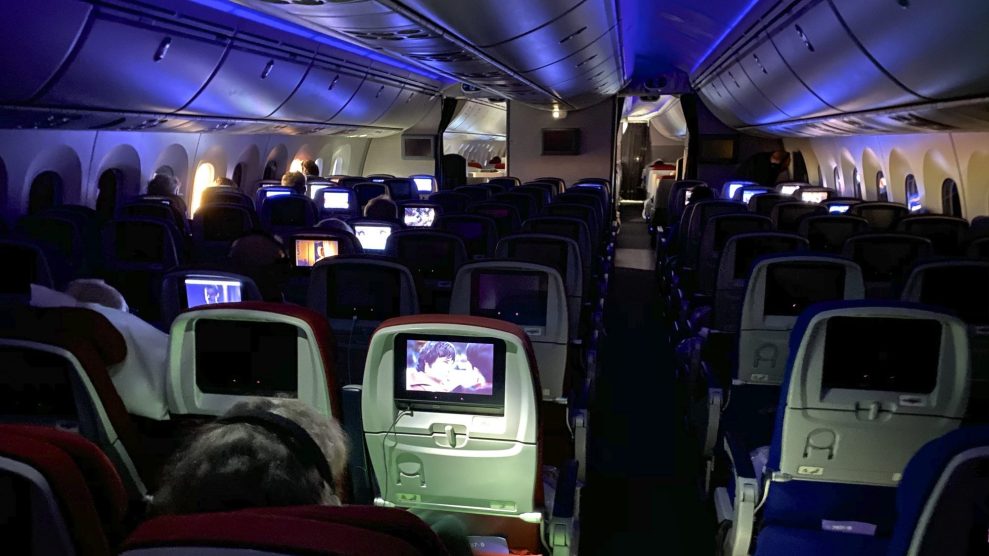 The coronavirus outbreak has provoked a string of unsettling sights, such as the sudden widespread use of masks, shuttered businesses and deserted streets. Another unusual phenomenon is also playing out in the skies—near-empty airplanes flying through the air.

Widespread travel restrictions around the world have slashed demand for air travel, with more than eight in 10 flights canceled. But there is a disparity in the US—while the Transportation Security Administration (TSA) has reported a 96 percent slump in passenger volume, to a level not seen since 1954, this hasn’t been matched by the number of flights being scrapped.

Slightly more than half the flights within the US have been canceled, leading to a slew of near-empty flights. Less than one in 10 seats on domestic flights were filled by passengers last week, according to an estimate by Dan Rutherford, aviation director at the International Council on Clean Transportation.

“The evidence suggests that the number of people flying is dropping faster than the flights so there are a lot of empty planes,” he said. “The airlines are left to figure this out for themselves and they are playing catch-up.”

This situation is leading to a “huge environmental waste,” Rutherford said, as planes burn huge amounts of fuel to transport just a handful of people around America.

In March, Sheryl Pardo shared a video of her being upgraded to first class and given a personalized safety briefing after being the only passenger to check in to an American Airlines flight from Washington to Boston. Meanwhile, a Virgin Atlantic flight from London to New York subsequently carried just seven people.

The aviation industry accounts for about two percent of global carbon emissions, although this is concentrated among the small fraction of the world’s population that regularly flies. The reduction in flights is expected to reduce pollution levels, with emissions from the sector dropping by almost a third last month, the Financial Times has reported.

However, passenger numbers may well bounce back quickly following the end of the COVID-19 crisis.

“You have dips around recessions but within two or three years it returns,” said Rutherford. “I imagine leisure travel will recover pretty quickly. In the boom years, airlines have eased off on attempts to improve fuel efficiency—what was going on was not sustainable. The million-dollar question is whether we will curb flying to protect the climate, as we are now doing to protect public health.”

The US airline industry got $25 billion in assistance in the recent stimulus package to deal with the sharp downturn in business. In return, the airlines are required to maintain a certain level of service, which may be leading to the near-empty flights.

The economics of running an airline can also be counterintuitive in that it can sometimes be cheaper to fly a commercial airliner to a planned destination than pay for a spot to simply park it.

According to Airlines for America, an industry group, more than a third of the US fleet, about 2,400 aircraft, have been parked, with airlines burning through cash at more than $10 billion a month as cancellations “far outpace” new bookings. Planes have gone from “load factors” of 80 percent in January to just 11 percent in April.

“The novel coronavirus pandemic has had, and continues to have, a severe and unprecedented impact on the US airline industry,” a spokeswoman for the lobby group said, adding that flights are also shifting important cargo such as medical supplies, food and mail.

Doug Parker, chief executive of American Airlines, said: “Those that are flying today are doing so for important reasons.”

A spokesman for United said it was “still somewhat rare” for a single passenger to be on a flight and said that the company had made investments in more sustainable fuel to lower its carbon footprint.

The commitment of airlines in general to addressing the climate crisis has been questioned during the coronavirus shutdown, however. Airlines are lobbying to rewrite the rules of a global agreement designed to tackle aviation emissions, with the coronavirus outbreak expected to make its targets tougher to meet.

Campaigners accused airlines of attempting to “dodge their obligations,” but the industry said it was “a matter of survival.”