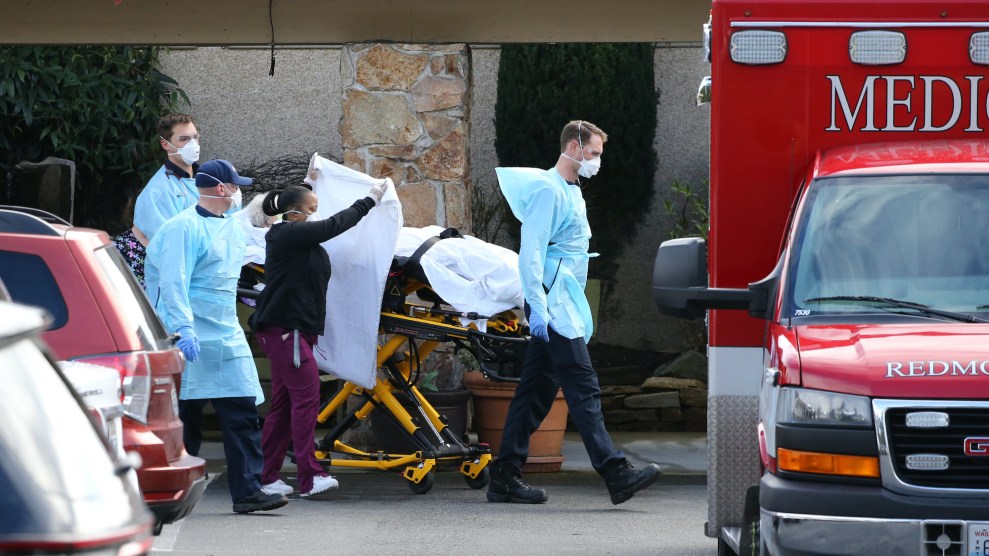 At least 37 people linked to the Life Care Center in Kirkland, Washington, have died of COVID-19. Above: A patient at the facility is moved into an ambulance in March.Karen Ducey/Getty

For months, Senate Majority Leader Mitch McConnell has upheld an ultimatum about passing new COVID-19 relief legislation this summer: No economic stabilization package will pass the Senate unless it protects businesses from coronavirus-related lawsuits. “We need to provide protection, litigation protection, for those who have been on the front lines,” McConnell said during a Fox News interview in April. “We have a red line on liability.”

Last Monday, a bill introduced by Sen. John Cornyn (R-Texas) and coauthored by McConnell clarified exactly which front lines Senate Republicans are interested in defending. The proposal, titled the Safe to Work Act, would make it harder for workers and customers to sue companies for negligently exposing them to the coronavirus and raises the bar for patients to sue healthcare providers for coronavirus-related malpractice. It also extends “front line” protections to healthcare executives, including nursing home owners, until 2024.

As negotiations over the coronavirus relief package stall, in part due to McConnell’s red line, experts on elder law and advocates for nursing home residents are alarmed that the Republicans’ proposed immunity shield could destroy what little accountability there is for nursing homes at a time when they’ve become deadly hotspots of COVID-19. According to the Centers for Medicare and Medicaid services, more than 40,000 people living in skilled-nursing facilities have died of the coronavirus—more than one quarter of all deaths from the illness. Those deaths represent around 1 in 32 of the country’s 1.3 million nursing home residents, though that is likely an undercount due to incomplete data.

Nursing home industry representatives have argued that a liability shield is necessary to protect providers’ ability to make difficult decisions in an emergency situation. “Subjecting health care workers and facilities to onerous litigation even as they have done their level best to combat a virus about which very little was known when it arrived in the United States would divert important health care resources from hospitals and providers to courtrooms,” the bill reads.

Yet by making liability lawsuits all but impossible, experts warn that corporate owners would not only be protected from claims of mismanaging their response to COVID-19, they would be free to pursue the kinds of cost-cutting that could endanger their vulnerable residents. “This act is not about responding to COVID-19,” says Nina Kohn, an elder law expert at Syracuse University. “It’s about using COVID-19 as a screen to eviscerate a system of public accountability that average individuals in this country rely on, but which certainly can limit corporate profitability.”

The pandemic has already created an unprecedented lack of oversight for nursing homes. In March, the Centers for Medicare and Medicaid Services ordered federal and state inspectors to only enter facilities deemed in need of infection control oversight, and didn’t clarify until June that facilities with COVID-19 outbreaks required state inspections. In May, the Government Accountability Office found that even before the pandemic, most nursing homes had infection control problems but faced no fines or other consequences. (Inspectors also may enter facilities where residents are considered to be in “immediate jeopardy”—emergency situations authorities are notoriously bad at identifying.) Meanwhile, family members, who often flag problems with their loved ones’ care, were banned from visiting all facilities starting in early spring, except for end-of life visits. So were volunteers and ombudsmen who resolve complaints and fight for residents’ interests.

“Essentially, the nursing home industry was given a holiday from any type of monitoring, oversight, or accountability during the COVID-19 pandemic, and most of that is still continuing to this very day,” says Richard Mollot, executive director of the Long Term Care Community Coalition, a New York-based nonprofit. “The normal systems that are there to protect residents are gone,” says Toby Edelman, senior policy attorney at the Center for Medicare Advocacy. “The last thing that exists is litigation.”

Fewer than 50 lawsuits have been filed so far against long-term care facilities for their handling of the coronavirus or treatment of residents during the pandemic, according to a database maintained by Hunton Andrews Kurth, a corporate law firm. In April, a woman filed a wrongful death suit against the Life Care Center of Kirkland, Washington, where her mother died of COVID-19 in March. (The facility has been linked to 129 cases and 37 coronavirus deaths.) Last month, a Tennessee woman sued a nursing home, claiming it did not adequately isolate patients with respiratory symptoms; her mother, a resident there, was infected and died of COVID-19 in late March. Another lawsuit against a nursing home in Southern California alleges it ignored infection control protocols, failed to hire enough staff, and downplayed the threat of COVID-19, leading to a resident’s death.

Senate Republicans’ relief bill would provide nursing homes sweeping protections against coronavirus related-lawsuits, moving them to federal court and imposing stringent requirements on plaintiffs. Families would only have a year to pursue cases and would be required to obtain costly affidavits and certified medical records before filing. The bill would also raise the standard of proof plaintiffs must meet while narrowing the definition of gross negligence so that, Kohn says, it is “almost impossible to satisfy.” The bill also specifies that any problems at a nursing home due to a lack of staff or resources can’t be considered gross negligence—providing a ready-made defense for most facilities, which are often understaffed and have been losing money.

“The nursing home industry was given a holiday from any type of monitoring, oversight, or accountability during the COVID-19 pandemic.”

“The intention is to stop all litigation,” Edelman says. The staffing exemption, she predicts, could be a defense for any nursing homes that do get sued: “‘Yeah, we didn’t feed your mother or give her her medication, but it’s not our fault, because we didn’t have the staff.'”

Even in normal times, advocates say, lawsuits against nursing homes are uncommon, both due the difficulty of bringing cases and their emotional toll on family members. “They don’t want to dwell on on how terrible the end of their loved one’s life was,” Mollot says. “They want to move on, to think of their loved one as not being in pain any longer.” Many cases are blocked by arbitration agreements, which were permitted after the nursing-home industry fiercely fought the Obama administration’s effort to ban them. Cases that do make it in front of a judge typically involve serious allegations such as severe bed sores, falls, and malnourishment. Plaintiffs must prove that their loved one would have survived if not for neglect or serious mistakes, and that their death was foreseeable, Kohn says. And families don’t stand to win much in damages, in part due to residents’ already-short life expectancy.

But advocates say lawsuits, though rare, matter because they can deter maltreatment. While few lawsuits make it to court, the “small threat of a big loss,” as Kohn puts it, can keep nursing homes from cutting corners to increase their profit margins. About 70 percent of the country’s 15,400 nursing homes are operated for profit. Those privately owned facilities are less likely to receive four or five-star ratings on the federal nursing home quality scale than nonprofit or government-operated homes, and more likely to be flagged as persistently low-performing or cited for abuse, a New York Times investigation found in May.

The nursing home industry, which Politico calls “one of the lobbying world’s quiet powerhouses,” has been arguing since early in the pandemic that long-term care companies should be granted legal immunity for their response efforts. The push began on the state level, where nursing home interest groups pressured governors to protect them from lawsuits. In an April 2 letter, the Florida Health Care Association, a trade group, asked Florida Gov. Ron DeSantis, to “extend sovereign immunity” to healthcare workers, including nursing homes. By late July, at least 28 states had enacted executive orders or laws protecting healthcare providers, sometimes including nursing homes, from liability lawsuits, according to the National Consumer Voice for Quality Long-Term Care. New York and New Jersey went further, granting providers some protection from criminal prosecution.

But those state-level successes were not enough for the nursing home industry. The American Health Care Association, which represents long-term care facilities, has spent more than $1.7 million this year lobbying the federal government on issues including coronavirus relief, according to the Center for Responsive Politics. Last month, Mark Parkinson, the organization’s president and CEO, wrote in a message to members that a federal immunity shield was a top priority for his organization, along with obtaining additional funding. (On July 22, President Donald Trump announced an additional $5 billion in nursing home funding.) “Only a reasonable federal immunity solution that will protect our operators and staff for their good faith efforts during this challenging time is what we’re asking for,” Parkinson wrote.

“Fortunately, Senate Majority Leader McConnell is strong on this issue and has said that if liability immunity is not in the next stimulus bill, he will not allow the bill to advance,” he added. “That gives us a real shot at success.”