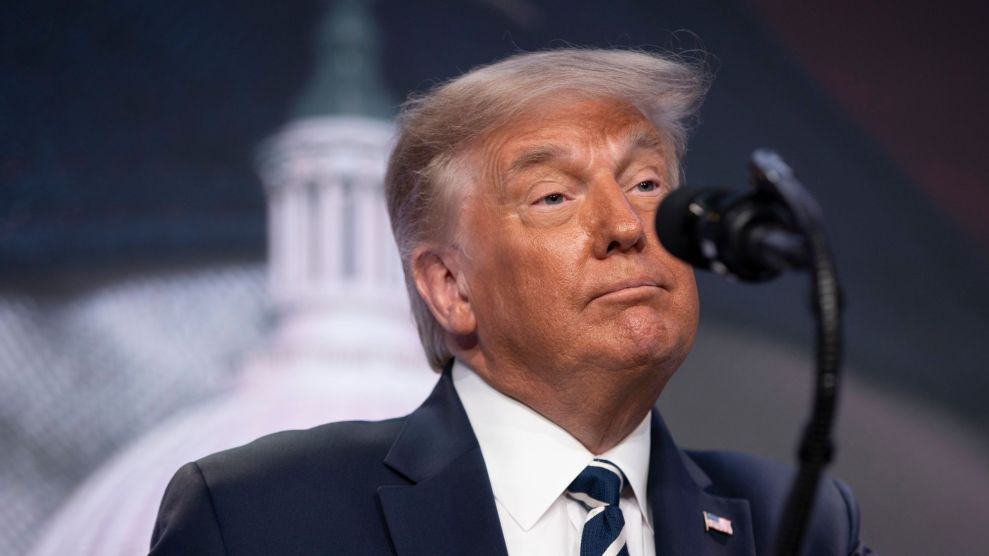 President Donald Trump woke up bright and early Saturday morning and tweeted out a particularly toxic conspiracy theory. Members of the “deep state,” he complained, had infiltrated his own Food and Drug Administration and were sabotaging efforts by pharmaceutical companies to enroll patients in coronavirus drug trials—all to stop him from winning reelection.

The deep state, or whoever, over at the FDA is making it very difficult for drug companies to get people in order to test the vaccines and therapeutics. Obviously, they are hoping to delay the answer until after November 3rd. Must focus on speed, and saving lives! @SteveFDA

Trump’s obviously false allegations echo comments he made earlier this week after top officials at the National Institutes of Health reportedly persuaded the FDA to delay its planned emergency authorization for a procedure using blood plasma containing antibodies from recovering COVID-19 patients to treat sick individuals. Convalescent plasma, which Trump has frequently touted, is viewed by many scientists as a promising treatment, but researchers have so far struggled to conduct studies that would prove that it at actually works.

Asked this week about the NIH and FDA’s decision, Trump lashed out. “It could be a political decision, because you have a lot of people over there that don’t want to rush things because they want to—they want to do it after November 3rd,” he told reporters. That allegation is completely baseless; there’s no evidence whatsoever that government scientists are plotting to delay COVID-19 treatments until after the election. In the case of plasma, the administration’s own experts, including Anthony Fauci, argued that there was simply not enough evidence to go forward, according to the New York Times.

Another story this week may shed some light on Trump’s paranoid attacks on his own health experts. On Sunday, Axios published a remarkable article detailing the president’s efforts to persuade the FDA to green-light an unproven oleander extract that, its backers insist, can cure COVID-19. In July, two board members from the company developing oleandrin—Andrew Whitney and MyPillow founder Mike Lindell—managed to secure an Oval Office meeting with the president. Lindell told Axios that during the meeting, Trump essentially told them, “The FDA should be approving it.” But the news site noted that FDA commissioner Stephen Hahn, who Trump tagged in his tweet Saturday, appeared to be resisting and that Whitney had “privately complained that the FDA has been dragging its feet.”

But that’s not evidence of a deep-state cabal sabotaging Trump’s electoral fortunes. Rather, it’s evidence that in spite of the president’s efforts, the FDA, at least in this case, seems to be doing what it is supposed to be doing: protecting Americans from unproven miracle cures pushed by politically connected companies.

There’s similarly no support for Trump’s claim that the FDA is improperly interfering with vaccine trials for political reasons. Just the opposite: On Thursday, Reuters reported that Peter Marks, a high-ranking FDA official, had said he would resign from the agency rather than acquiesce to hypothetical White House pressure to quickly approve a vaccine that had not been shown to be safe and effective.

Again, it sounds like FDA officials are just doing their jobs. They may also be attempting to avoid a repeat of the hydroxychloroquine fiasco, in which the agency authorized the emergency use of an unproven drug that Trump repeatedly touted as a solution to the coronavirus crisis. Hydroxychloroquine remains unproven, and in June, the FDA revoked its emergency use authorization, citing risks posed by the medication.

Two months later, Trump is still fuming. In a second tweet attacking the FDA Saturday, Trump insisted that “many doctors” disagree with the FDA’s decision on hydroxychloroquine.

Many doctors and studies disagree with this! https://t.co/fpLVJZMvHS