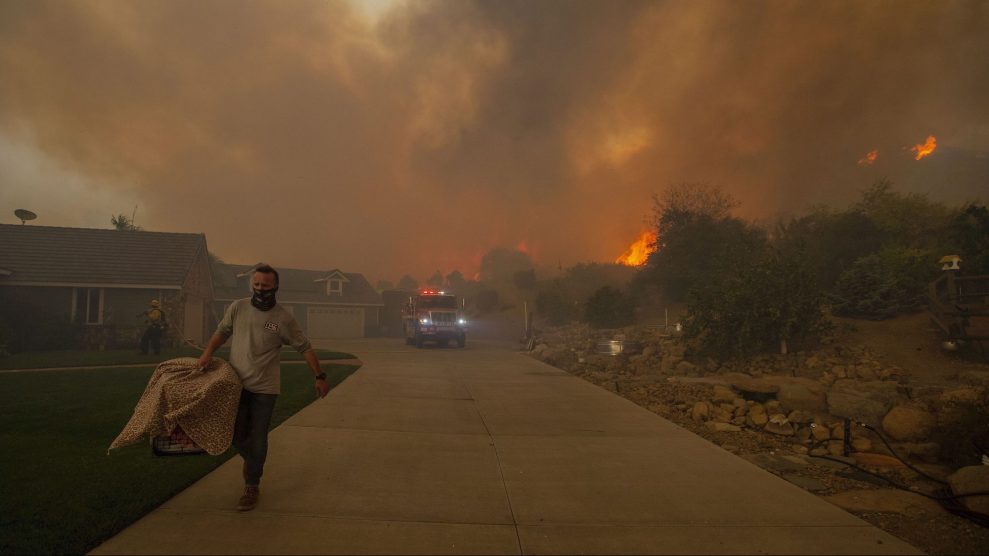 A neighbor helps a family remove animals from their home in Yucaipa, California, on Sunday, September 6, 2020.Terry Pierson/Zuma

Unless you were living under a rock, you saw photos last week of the skies over the San Francisco Bay Area that looked ripped from an apocalyptic fantasy: they were a deep, irradiated orange that didn’t look like any specific time of day.

San Jose at noon today. Red dot is the (blocked out) sun. I think all of California is resembling hell at this point 🙁 pic.twitter.com/c33q2hTp1x

For the previous month, massive wildfires—including six of the top 20 burns in California’s history—have been blazing across thousands of acres all over the West, with so much smoke at times the sun was blocked. The eerie look has been disturbing enough, but health officials have been particularly concerned by the potential impact of all that smoke on residents’ health—especially those who are at high risk of contracting, or who are already suffering, from the coronavirus. Almost 70,000 people have evacuated their homes in California, another 40,000 in Oregon, and 33 people have died from the fires. And with almost 30 more major wildfires burning, the skies of much of the West, up to Seattle, are shrouded by smoke.

Health experts are especially worried about the dangerous, pervasive, and invisible particles that the smoke has produced. Smaller than 2.5 millionths of a meter in diameter, and consisting of the material burned by the flames, they are known as particulate matter 2.5, or PM2.5. They are so infinitesimal that PM2.5 are able to bypass the biological defenses humans have to filter out many other pollutants and penetrate the lungs. When wildfires burn, the air becomes filled with them.

The 2018 “State of Global Air” report—a collaboration between the research nonprofit Health Effects Institute in Boston and the Institute for Health Metrics and Evaluation at the University of Washington in Seattle—makes clear the impacts of fine particulate pollution. “PM2.5 was responsible for a substantially larger number of attributable deaths than other more well-known risk factors (such as alcohol use … or high sodium intake),” the report noted, “and for an equivalent number of attributable deaths as high cholesterol and high body mass index.”

These particles can weaken lungs and cause inflammation of preexisting respiratory conditions, like asthma or chronic obstructive pulmonary disease (COPD). This has happened in pre-pandemic years. The smaller 2018 wildfire season, for example, is thought to have caused 1,400 premature deaths in the state. But the risk is even greater this year, as the latest fire season is unprecedented in size and is taking place during a pandemic caused by a disease that specifically targets the lungs. The combination, health experts say, poses a double threat.

“The worry this year is that the smoke from wildfires could increase the severity of COVID-19 symptoms,” Nina Bai wrote in an article from University of California San Francisco that focused on patient care. “Though there have yet to be studies looking specifically at the effect of wildfire smoke on COVID-19, there is preliminary research linking air pollution to increased COVID-19 susceptibility, severity and death.” That preliminary research, an April study from Harvard T.H. Chan School of Public Health, didn’t mince words. “A small increase in long-term exposure to PM2.5 leads to a large increase in the COVID-19 death rate,” the study concluded. According to US EPA standards, exposure to less than 12 micrograms of PM2.5 daily is a relatively safe amount. But that makes the Harvard study’s determination all the more concerning: “[A]n increase of only 1 𝜇g/m3 in PM2.5 is associated with an 8% increase in the COVID-19 death rate.” Just a marginal bump increase in PM2.5 inhalation is enough to tip death rate in a meaningful way.

“Though there have yet to be studies looking specifically at the effect of wildfire smoke on COVID-19, there is preliminary research linking air pollution to increased COVID-19 susceptibility, severity and death.”

This fear has been echoed by others in the health care community. As Dr. Michael Schivo, an associate professor at UC Davis who specializes COPD, tells me, there are two main potential health consequences at the intersection of COVID-19 and smoke inhalation: increased risk of contracting the coronavirus, and more severe disease symptoms. According to Schivo, when someone inhales ash and PM2.5, their lungs become inflamed and preexisting conditions can potentially flare up. Cells along the airway get irritated by PM2.5, which then can weaken the cell’s ability to protect the lining of the lungs. “Their ability to act as a natural barrier against respiratory viruses is compromised,” he says.

COVID-19 hasn’t existed long enough for there to be any rigorous studies of the effects of extreme exposure to wildfire smoke, but the case is clear with other respiratory illnesses. When respiratory viral symptoms begin to appear for someone who suffers from asthma, COPD, or the flu they could become more serious when exposed to PM2.5. That this exposure can lead to higher rates of hospitalization and death from viral infections is well-documented. In May, a study from Rovira i Virgili University, a Spanish medical school, found, “[A]ir pollutants such as PM2.5…can affect airways through inhalation, exacerbating the susceptibility to respiratory virus infections, as well as the severity of these infections.” After someone has inhaled smoke, their “immune system is already activated, and its ability to respond to a respiratory viral infection is worse,” says Schivo. “That means they’re more likely to have a severe illness from respiratory virus infection.”

One of the consequences for those exposed to wildfire smoke, the Centers for Disease Control and Prevention noted last month, is being “more prone to lung infections, including SARS-CoV-2, the virus that cause COVID-19.” In other words, if someone was exposed to COVID-19, breathing in smoke beforehand could increase their chances of becoming infected.

Another problem, Schivo says he’s seeing now, is that patients who are already suffering from smoke-related illnesses will postpone essential hospital trips because they fear exposure to COVID-19. “I’ve had patients who are at home and need to come to the hospital because of a COPD exacerbation, but they refuse for fear of [COVID-19],” he told me. When they’re finally sick enough to “come in, they have to, because they’re critically ill.” In the meantime, Schivo says he’s treating patients remotely, hoping that steroids might be enough to address their respiratory flare ups.

With so many people getting evacuated throughout the region, finding hospital care could add to the problems. “I could imagine that there’s a medical need that goes beyond wildfire, like being exposed to COVID-19, and then getting them health care is a real issue,” says Schivo. “It’s a perfect storm.”