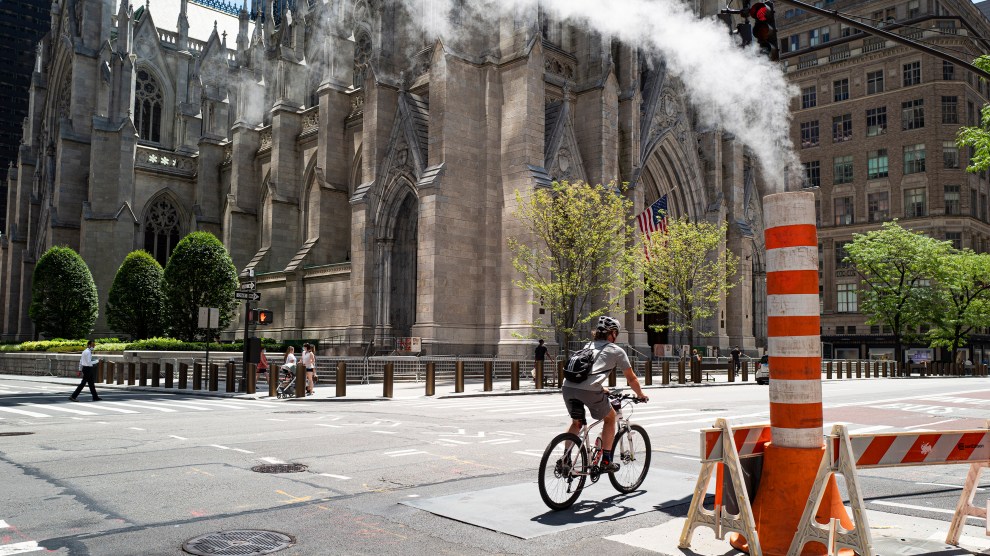 A lone bicyclist on a Manhattan street in August.Alex Menendez/AP

After the coronavirus paralyzed New York City in March, the only part of my life that became more pleasant was riding my bike.

For a moment, empty streets replaced cars parked in bike lanes, cars running red lights, cars blaring their horns for no discernible reason. On most days when I rode, I felt free. I no longer envisioned myself ensnared in the wheels of a box truck or flattened against the pavement by a charter bus that had run a red. Instead, I entertained myself, in this socially distanced reality, by riding to Rockaway Beach, or Kissena Park, or eerily silent Times Square with a clear mind.

I was still a small object amid a sea of speeding, two-ton hulls of glass and steel. But there were fewer cars overall. In April, traffic plummeted 60 percent from normal levels in Manhattan. Since then, traffic has increased, according to Politico, but was it was still down about 15 percent in August from pre-pandemic levels. That was just enough of a sustained dip for me to yearn for a reckoning.

As I biked around, I began hoping that our brief collective glimpse of a city with drastically fewer cars would convince people not to buy them at all. I hoped those who wanted to avoid crowded subways and buses would now consider opting for a (considerably less expensive) bicycle. I hoped that the outdoor dining spaces now encroaching on parking spots would remain there. And I really did hope that the island of Manhattan would set an example for other American cities by banning cars outright.

Now, I doubt that will happen. The coronavirus pandemic could have been an opportunity for New York City to dramatically shift its transportation infrastructure by taking swaths of street space away from cars and opening them up to pedestrians, cyclists, skateboarders, roller skaters, scooter riders, wheelchair users, and anyone else who scoffs at cars. But it was unequal half measures instead. After Mayor Bill de Blasio committed to blocking cars from 100 miles of the city’s streets, he reneged on his promise. Three months later, about 70 miles of roadway were closed—just over 1 percent of the city’s 6,074 miles of streets. These open streets service just 37 percent of the city’s residents, according to one estimate, and are primarily located in wealthy neighborhoods that haven’t been hit as hard by the coronavirus as lower-income communities.

I enjoyed the semi-carless city while it lasted. On long rides, I slipped the bandanna I use as a face mask down around my neck and smelled the heavy summer air. When I biked into Manhattan over the Williamsburg Bridge, I would climb about two thirds of a mile of unrelenting uphill on a narrow, graffitied bike path, dodging the cyclists who whipped by in the opposite direction. Then the skyline would rise into view as the bridge span leveled out above the East River, and the people who dotted the riverside park below appeared from this height like miniature dolls. There was no need for pedaling on the glorious decline. While cars stood still on the roadway below, gravity pulled me down the bridge into the Lower East Side’s deep embrace. Then a car horn would shatter my reverie, and I’d be back to the world I knew.