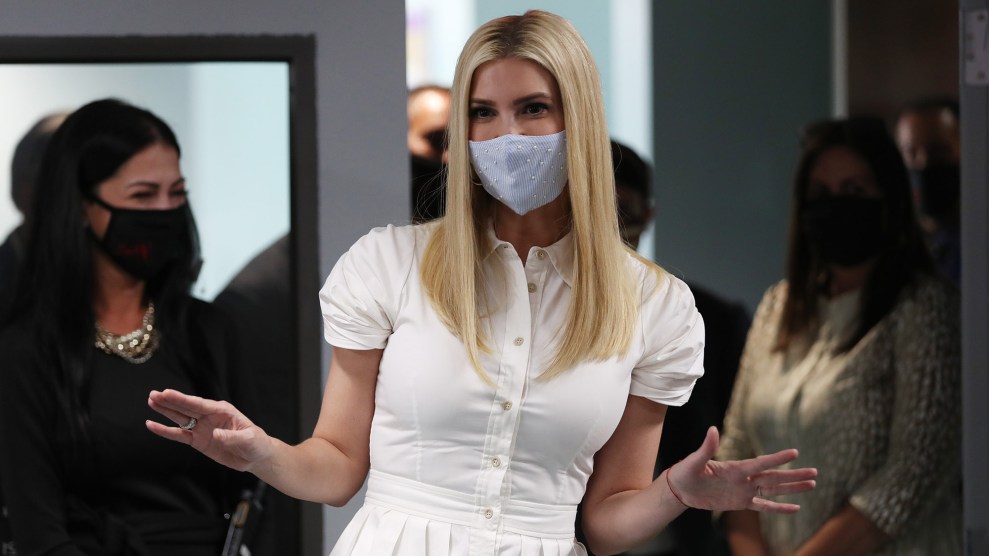 On Monday morning, shortly after the biotech company Moderna announced promising news about the efficacy of its COVID vaccine, Ivanka Trump went on Twitter to blow some minds:

Fact Check: This Moderna /NIH vaccine is literally the one that President @realDonaldTrump partnered with Moderna to create on January 13, 2020… I repeat January 13th, 2020.

Just be happy. This is great news for America and for the world! 🇺🇸 https://t.co/Oq9UTwOfet

Let’s pick up the pieces of our brains and recall what was literally happening back in January. Early in the month, intelligence and health officials were becoming increasingly alarmed by a novel coronavirus spreading in China. Yet at the time, as officials later told the Washington Post, “Trump’s advisers struggled to get him to take the virus seriously.” Trump received his first in-depth briefing on the virus from Secretary of Health and Human Services Alex Azar on January 18. (During the call, the president reportedly was more interested in discussing when a ban on flavored vaping products would end.) The first COVID-19 case in the United States was reported on January 20. Asked about the coronavirus publicly for the first time two days later, Trump declared, “We have it totally under control. It’s one person coming in from China.”

Trump’s children have ascribed many unlikely qualities to him, but clairvoyance is a new one.

While there is now ample evidence that Trump knowingly downplayed the seriousness of the coming pandemic from the start, Ivanka would have us believe that behind the scenes, her father was taking it super seriously and being astoundingly proactive. So proactive, in fact, that he joined up with a much-hyped yet unproven biotechnology company to kickstart a COVID vaccine one week before the virus had hit American soil and four months before he would announce Project Warp Speed. Trump’s children have ascribed many unlikely qualities to him, but clairvoyance is a new one.

So what exactly was Ivanka talking about? It turns out that Moderna did get started on its COVID vaccine on January 13, two days after China released the virus’ genetic sequence. A document filed with the Securities and Exchange Commission explains that on that date, the company’s researchers “finalized the sequence for the SARS-CoV-2 vaccine” and it “mobilized toward clinical manufacture.” That step was taken in collaboration with the Vaccine Research Center, which is under the National Institutes for Health (NIH). Even if Trump wasn’t personally involved, can’t he take credit for his administration’s role in this moment?

It’s not that simple. Moderna’s partnership with the feds to develop messenger RNA technology, which its coronavirus vaccine is based on, began long before the novel coronavirus flared up. The Pentagon funded the company’s mRNA research in 2013, and the federal government gave it $125 million to develop a mRNA-based Zika vaccine in 2016. Its COVID-related work on January 13 appears to have been completed under an already existing research agreement with the NIH, according to a review by the consumer advocacy group Public Citizen.

In short, Trump didn’t swoop in to launch the Moderna-NIH COVID vaccine partnership. Rather, his administration piggybacked on an ongoing collaboration whose initial agreements were signed in—checking the fine print—November 2015. Maybe Ivanka should have added, “Thanks, Obama.”