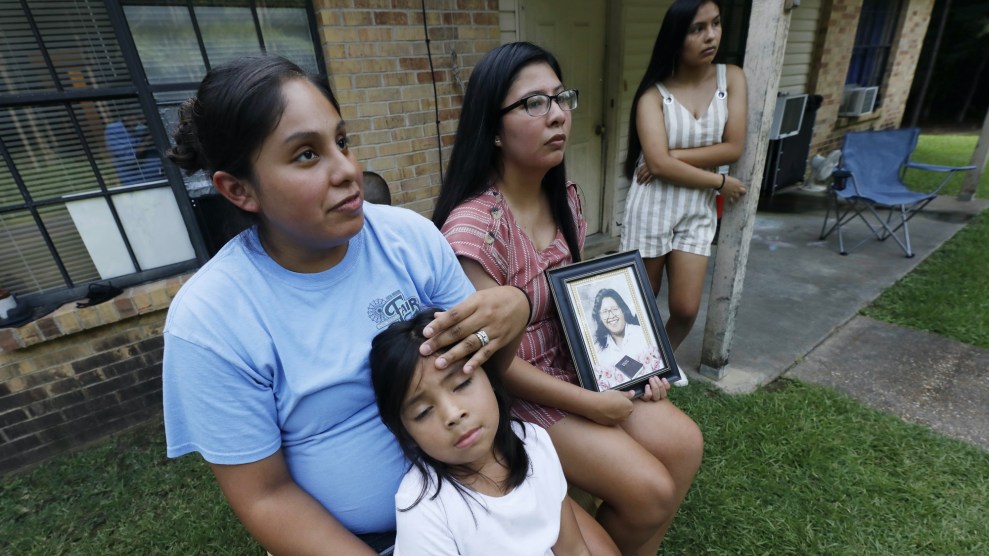 Sharon Taylor of the Missisippi Band of Choctaw Indians is mourned by her three daughters and granddaughter in Tucker, MI on July 21, 2020. Rogelio V. Solis/AP

When the first wave of COVID-19 hit the Mississippi Band of Choctaw Indians in spring, Brian Mask would awaken nightly to the sound of helicopters airlifting patients from the under-resourced local health center to hospitals as far as 80 miles away. “You could see the fear in people when they came outside, asking, ‘Who is it this time?'” he said. “We couldn’t even mourn the first person, because then it was the next one, and the next one, and the next one.”

Weeks prior, in early March, Yale disease historian Frank Snowden had warned in the New Yorker that epidemics spread “along the fault lines created by poverty and inequality”—so as COVID-19 now continues to sweep the United States, it comes as no surprise that it’s found a particular niche among Indigenous communities.

The Mississippi Choctaw, the Navajo and other southwestern tribes struggled early on, but most of rural Indian Country was largely unscathed until the pandemic’s most recent surge. Now, cases have spiked for the Blackfeet and Crow tribes in Montana, where overworked tribal hospital employees are tending to relatives and neighbors. In Wisconsin, cases among Native Americans have risen nearly sevenfold in three months, while Lakota tribes’ efforts to protect their reservations in North and South Dakota finally crumbled in the face of state leaders’ inaction. The virus is even raging through remote Alaska Native villages with little to no health infrastructure.

I’m done being sad that my tribe & family keep losing loved ones to #COVID19. All I have is anger now. We lost a wonderful young man last night. 32 years old. Amazing father, husband, & the light of his extended family. I’m devastated. Wtf is happening?!!

Though culturally distinct and far apart, these communities share a common condition: the chronic neglect of a political system that’s never valued their lives. Native Americans are the only people in the United States with a constitutional right to health care, yet despite this and other promises made in treaties, the federal Indian Health Service (IHS) receives just a fraction of the funding it needs to fulfill tribal health needs. The result is a dearth of preventative care, hospital beds, and physicians (especially Indigenous physicians) on reservations, leaving Native patients to travel dozens of miles to get care, or simply disengage from the system. All these problems get exponentially worse under the stress of a pandemic, as Indigenous health expert Dr. Donald Warne explained to me in August.

Data from the Centers for Disease Control and Prevention show that, compared to whites, American Indians and Alaska Natives with COVID-19 are four times more likely to be hospitalized, a higher rate than any other ethnic group—and yet probably an under-estimate, given the rampant misclassification of Indigenous people in health data. Their higher rates of hospitalization and mortality reflect higher rates of diabetes, heart disease, and other conditions stemming from generations of life on reservations, where resources are usually scant and environmental injustices have tainted air and water.

Once his cousin is buried this week, Mask plans to launch a toy drive for children that lost parents and grandparents to COVID.

“Many parts of Indian Country are lacking in fundamental infrastructure,” Rep. Deb Haaland (D-N.M.) of the Laguna Pueblo tribe told me in April. “When you don’t have running water or water that’s potable, it’s difficult to stay hydrated, wash your hands, and exercise all the precautions.”

Inadequate housing makes it tough to quarantine or social distance, while gaps in education and Internet access have limited the reach of health guidance. Navajo people I spoke to in May said it wasn’t until local leaders took to the radio, sharing messages in the Navajo language, that elders began to take the pandemic seriously, as many don’t go online, speak English, or trust outsiders. Dr. Warne said this problem exists throughout Indian Country, where more reliable, culturally attuned messaging could do a lot to stem the virus’s spread, especially with more federal funding for the national network of Tribal Epidemiology Centers.

Though the CARES Act allocated $8 billion for the country’s 574 federally recognized tribes, economic desperation is forcing reservations to re-open their doors to tourists and visitors, and thus to virus risk. Tribal casinos nationwide have been projected to lose more than $22 billion this year, or roughly half their revenue. The Potawatomi, Oneida, and Lac du Flambeau Band of Lake Superior Chippewa (all tribes in Wisconsin) chose to re-open their casinos even as the dangers became evident. The Lac du Flambeau saw cases increase fivefold in just one month, but as their COVID-19 incident commander told Wisconsin Public Radio, “we needed that revenue.”

The Mississippi Band of Choctaw Indians re-opened its casino-resort in October despite a devastating new wave of cases. Since COVID-19 arrived in April, more than 13 percent of the tribe’s 11,000 members have tested positive, and at least 88 have died (more than the number of deaths in Vermont, population 624,000). The casino employs about 1,200 tribal members including Brian Mask, who’s taken it upon himself to firmly enforce the casino’s mask mandate after losing several loved ones to the virus.

Eventually, the Indian Health Service dispatched a four-person team to shore up local services, and the National Guard began offering testing in the tribe’s eight rural communities. But Mask says the most important support has come from tribal members themselves.

For six months, Mask and his neighbors have led mutual aid efforts collecting and distributing food, hygiene products, and other necessities. When local leaders were slow to offer health guidance, they urged people to mask up and stay home—all as the virus claimed the lives of Mask’s next-door neighbor, three uncles, and most recently, a cousin he grew up with. “It’s unreal,” he says. “It feels like I’m living in one of those B horror movies.”

Glimmers of relief are appearing. The Indian Health Service recently announced plans to vaccinate nearly half the country’s 5.2 million Native Americans in 2021, starting with elders, essential workers, and those with high-risk conditions. President-elect Joe Biden’s transition team just appointed Navajo Nation health director Dr. Jill Jim to its COVID-19 advisory board, and Rep. Deb Haaland is reportedly in the running to become the first Indigenous Secretary of the Interior, a move that tribal leaders say would help center their needs in federal affairs.

In the meantime, Mask is preparing for a tough winter by staying away from crowds at the casino and urging local youth to stop gathering. Once his cousin is buried this week, he plans to launch a toy drive for children that lost parents and grandparents to COVID. “I’m the ‘mask’ that’s gonna save my community,” he quipped. “I ain’t gonna quit.”