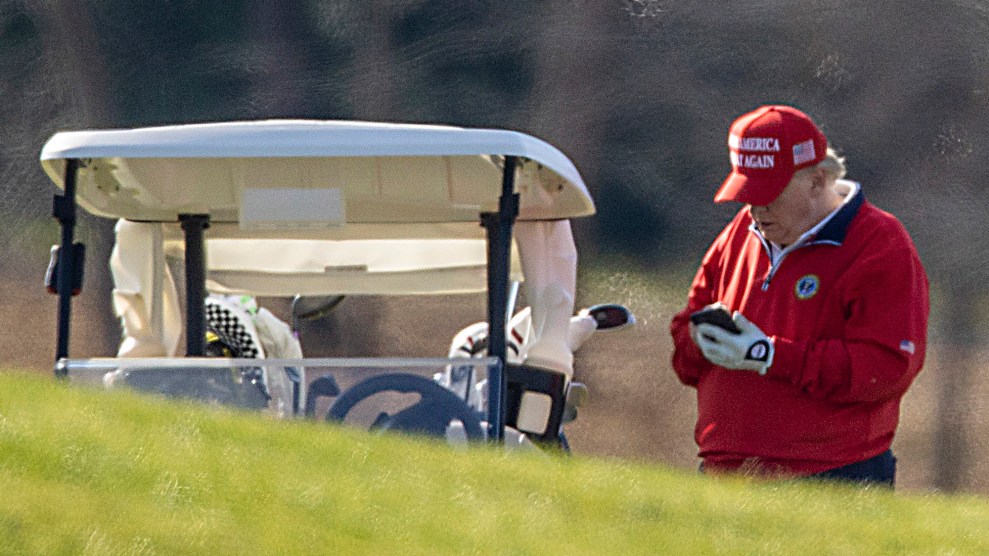 On Wednesday, as the United States hit new records for the number of daily deaths from the coronavirus pandemic and the number of people hospitalized with COVID-19, President Donald Trump was, as usual, tweeting about the election he lost more than a month ago. While he was typing a flurry of false claims about “massive FRAUD,” the country’s total death toll was passing 300,000.

Reading Trump’s recent tweets, you would never know the United States is in the midst of a surging pandemic that is killing more than 2,000 people a day. Of his 729 tweets between November 3 and December 16, more than two-thirds were about his attempts to reverse his election loss through baseless claims of voter fraud and far-fetched lawsuits. The pandemic was just a blip: Four percent of his tweets were about vaccines and just two percent mentioned the coronavirus at all—without ever acknowledging its human cost or encouraging Americans to take precautions to protect themselves or others from getting sick.

November 16 was typical: After nearly a dozen tweets about his recent defeat (“I won the election!”), he bragged that news of the Moderna vaccine’s efficacy had boosted the stock market. “For those great ‘historians’, please remember that these great discoveries, which will end the China Plague, all took place on my watch!” he gushed. That was followed by a quick dunk on the nation’s allies: “European Countries are sadly getting clobbered by the China Virus.” Then it was back to normally scheduled programming: more angry tweets about the effort to undo President-elect Joe Biden’s win.

Since December 1, as the pandemic has entered its most deadly period in the United States, Trump has mentioned the coronavirus just three times on Twitter. Two tweets were about getting kids back to in-person school. The other was an announcement that his lawyer Rudy Giuliani—”who has been working tirelessly exposing the most corrupt election (by far!) in the history of the USA”—had tested positive for “the China Virus.”

Of course, Trump’s efforts to downplay the pandemic are nothing new, from his initial denial of its risks to his suggestion earlier this fall that deaths in Democratic states shouldn’t be counted. In the past six weeks, the closest Trump’s tweets have come to noting the virus’ impact in the US was an attempt to downplay the death toll in a November 21 message in which he defensively accused the media of not mentioning “that far fewer people are dying when they get Covid.” Within less than a month, Biden’s election victory would be confirmed (again) and another 50,000 Americans would be dead from COVID-19. So far, Trump hasn’t acknowledged either.