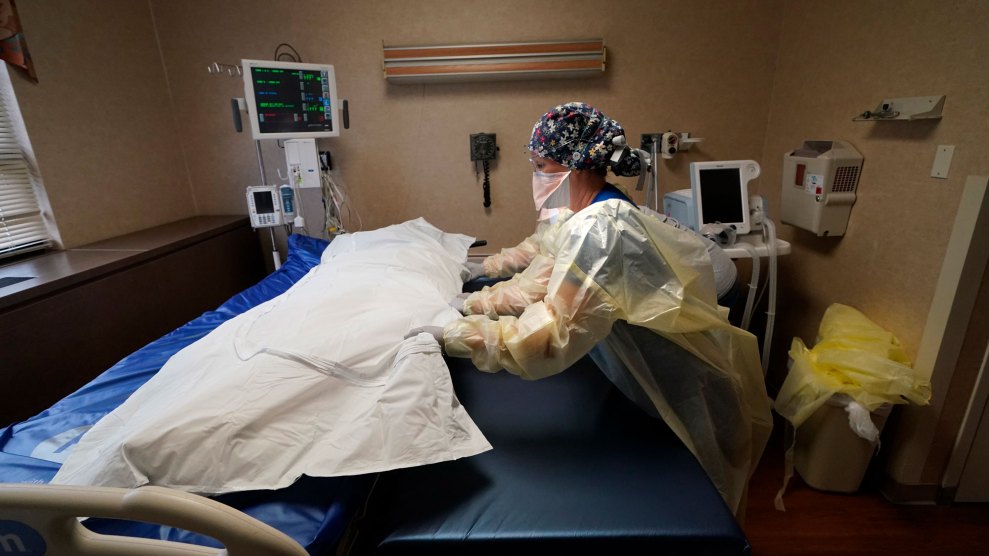 Medical staff move COVID-19 patient who died onto a gurney to hand off to a funeral home van, at the Willis-Knighton Medical Center in Shreveport, La., Wednesday, Aug. 18, 2021. Gerald Herbert/AP

Just three months ago, the United States averaged fewer than 25,000 COVID infections a day, with an average of 627 COVID deaths over a seven-day period. It was the end of May and it seemed as if the light at the end of the proverbial COVID tunnel was near just as the “hot vax summer” was about to begin.

Then, as more and more Americans became vaccinated, too many—to the tune of 47 percent of Americans as of Sunday—have refused. And among that group of people, the more transmissible Delta variant spread like wildfire. Now, at summer’s end, as the nation averages more than 160,000 infections per day, more than 100,000 daily hospitalizations, and more than 1,500 deaths, the highest rates since March, epidemiologists, public health officials, and, frankly, many Americans are asking: When will this end?

In places where vaccinations are low, the wave of infections has pushed hospitals to the brink of a crisis. In Mississippi, just 38 percent of residents are fully vaccinated, and the surge in cases and hospitalizations, particularly among children, have strained hospitals. At the University of Mississippi Medical Center, the state’s only level one trauma center, the emergency room and ICU are beyond capacity, with exhausted hospital workers treating patients in a “logjam” of beds scattered in the hallways and in triage rooms. During a recent news conference, Dr. LouAnn Woodward, the head of that medical center, said, “We, as a state, as a collective, have failed to respond in a unified way to a common threat.”

In Florida, where Republican Gov. Ron DeSantis has been aggressively antagonistic toward mask mandates and measures that would curtail COVID’s spread, the state is seeing its deadliest period in the pandemic, averaging 244 deaths per day, higher than its peak last summer. Just 44 percent of residents are vaccinated in nearby South Carolina where the state is averaging 5,400 new COVID cases per day, the highest infection rate in the country. Steve Benjamin, Democratic mayor of Columbia, the state’s capital, announced he planned essentially to defy the Republican governor’s ban of mask mandates by imposing a local state of emergency and order students to wear masks if COVID cases keep rising.

I always have been.

But everyday South Carolinians are being devastated by poor leadership & decisions.

Now even our children are dying.

Even if its through our individual leadership, we must keep up the fight against #COVID19 – 😷#GetVaccinatedNow pic.twitter.com/5vHVhMRVTc

What’s more, the CDC recently found that unvaccinated people are 29 times more likely to be hospitalized from COVID than those who are vaccinated, further burdening hospital resources. Part of the issue, of course, is that only kids 12 years and older can currently get vaccinated, and the reopening of schools for in-person learning has amplified concerns over the spread among children, teachers, and their families. CDC research found that between mid-June and late August, COVID hospitalizations rose fivefold among children and teenagers.

But the story of unvaccinated versus vaccinated children could be considered a microcosm of the unfolding of the pandemic generally. Even though children under age 12 cannot be vaccinated, Dr. Anthony Fauci, the nation’s top infectious disease expert, recently said that they likely won’t begin to be until “hopefully by the mid, late fall and early winter.” But for those who can get vaccinated, it’s clear that the shots work to curtail hospitalizations. The rate of COVID hospitalizations was 10 times higher among unvaccinated children compared to vaccinated ones. And tellingly, pediatric hospitalizations were roughly four times higher in states with the lowest vaccination rates than in those with the highest, further showing that vaccines curtail severe disease even among children.

What does this all mean? It means we’re in the midst of yet another period of uncertainty that’s likely to continue if we fail to vaccinate enough people and take actions such as mask mandates to curb the virus spread. A Washington Post/ABC News poll showed that 52 percent of Americans supported vaccine mandates from businesses and two-thirds of those polled supported school districts requiring mask wearing for students, teachers, and staff. Even so, that same poll found that even though they are more concerned than in June, more than 60 percent of unvaccinated Americans saw “low” to “no” risk of contracting COVID.

“People are pretty burned out 18 months into this thing,” Ezekiel Emanuel, professor of medical ethics and health policy at the University of Pennsylvania, told the Washington Post. “And the exhaustion has been made worse by the rapid seesaw we’re having—take your masks off, put them back on. It’s all very confusing, but we have to be honest: We don’t know when, we don’t know how. We don’t know.”