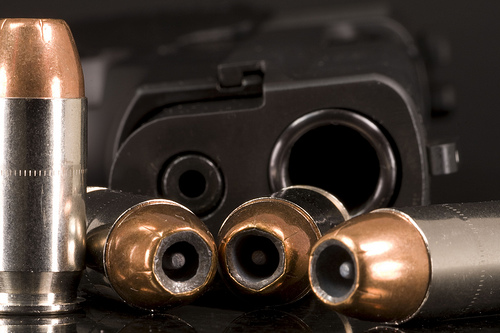 Photo by flickr user <a href="http://www.flickr.com/photos/kcdstm/2221475782/" target="new">kcdsTM</a> used under a Creative Commons license

The economy is in the toilet, but there’s at least one industry that appears to be going great guns (sorry…): the firearms business, particularly the firms that manufacture ammunition for American gun owners. You may have read Yasha Levine’s piece about the surge in ammo sales in Victorville, California, where, Levine reports, fears of tighter gun regulations under the Obama administration have given way to a new kind of arms race.

The same phenomenon exists in Montana. According to the Missoulian, ammo is racing off the shelves at a record pace. Darren Newsom, owner of Bitterroot Valley Ammunition’s three local manufacturing facilities, told a reporter that his company produces 300,000 rounds a day, but is still unable to meet demand. “We probably have about six months of back orders right now,” he said, adding that he sold more than 300,000 rounds in just two hours at a recent gun show. “It’s just unreal… Somewhere in lots of basements around the country, there are millions of rounds of ammunition being stored.”

Turns out that fear of Obama’s doomsday gun laws has been of great benefit to the local economy. Maybe it’s all part of his grand strategy for economic recovery? From the Missoulian:

The ammunition shortage is creating a bit of an economic boon for Ravalli County.

Newsom plans to open a fourth manufacturing facility in Stevensville sometime in September. He employs about 50 people right now and could add up to another 100.

“There are a lot of people out of work right now,” he said. “Two years ago, I probably couldn’t find 10 people to go to work for us. Now I have 10 people a day coming in here looking for a job.”

Newsom believes the need for ammunition won’t go away. This scare is creating a whole new group of ammunition customers for the future, he said.

Take the .380 caliber pistol. A year ago, Newsom said there was hardly a demand for the ammunition. Since then, the .380 auto pistol has become very popular with women.

“One year ago, it wasn’t in demand and now it’s some of the most sought ammunition in the U.S.,” he said. “There are more people getting into shooting and that’s one thing about ammunition – you can only shoot it once.”