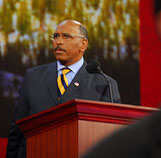 During the election campaign, Obama would occasionally express interest in choosing Supreme Court justices with real-world experience and “empathy” for the struggles of the little guy. At the time, most observers assumed that he would probably wind up with a very conventional nominee anyway, because anyone outside the cloistered worlds of the appeals courts or the academy would have a tough time surviving the post-Bork confirmation process. However, looking at the GOP’s hilariously inept attacks on Obama’s criteria for choosing judges, I’m starting to think that he should go ahead and pick his model jurist after all.

As Dahlia Lithwick explains in Slate, Republicans seem to have decided that their best offense is to declare empathy a dangerous quality in a judge. It’s hard to see how you endear yourself to the American people by taking a principled stand against the consideration of any injustices that they may be facing. And it’s even more difficult to see this strategy working when the messengers are as imperfect as Michael Steele (Sample argument: “I’ll give you empathy. Empathize right on your behind!”) and John Yoo, who is at least extremely sincere in his lack of humanity. (One of the more memorable moments in Yoo’s book is the part where he arrives at Guantanamo Bay for the first time and muses that it would make “great beachfront property.”) But Steele hasn’t given up. In fact, he’s found a posterboy for the travesties of justice that occur when you turn an empathist loose on the bench — the beauty pageant bench, that is.

What was so outstanding about Miss California, let’s do a little parallel… This is what an empathetic judge looks like,” Steele said of celeb-blogger Perez Hilton. “The empathetic judge in this case, the judge of the beauty pageant, asked this woman a question and instead of taking her answer at face value, he was empathetic to a particular community and he thought her answer should be favorably disposed towards that particular community… This is the slippery slope this nation is putting itself on and I’m telling you folks to stop it. Don’t go there.”

With an opposition like this, Obama’s court battle may turn out to be far smoother than anyone expects.