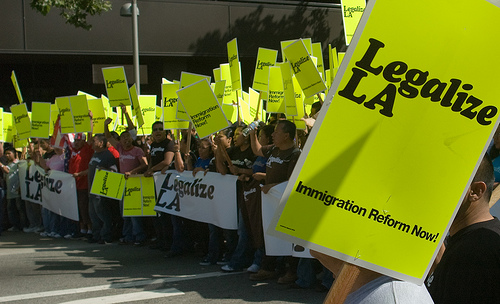 A year and a half after inspecting their sexy downtown factory, U.S. Immigration and Customs Enforcement (ICE) finally nailed Los Angeles-based manufacturer American Apparel with the most unsurprising violation ever—according to the report, the company currently employees about 1800 workers (a third of the manufacturing staff) whose immigration status is (very) debatable. Cue Dov Charney yawning.

To many of us interested in immigration reform, the company’s unprecedented engagement with the subject has been thrilling. By Charney’s own estimate, he and his workers have been marching in the May Day immigration reform demonstrations in Los Angeles since 2001. Since then, the company’s Legalize LA campaign has spawned a product line from tank tops to booty-shorts, a national print campaign, viral videos, and a timeline of American immigration policy on the shelves at every American Apparel retail store. On neon pink and sunshine yellow t-shirts, on the pages of the New York Times and Los Angeles Times, and in their coral pink downtown factory, American Apparel has made its (I think admirable) position on immigration central to its ethos as a corporation.

Charney and AA haven’t been exactly subtle in expressing their feelings on immigration. This is a company that advertises its manufacturing jobs exclusively on Los Angeles’s 107.1 Super Estrella and other Spanish language media. Yes, the announcer reminds applicants to bring their documents. But the company didn’t do a whole lot to make sure those documents weren’t fake. Then again, neither do the majority of California cash cow industries—agriculture, service, and hospitality, to name a few—nearly all of which rely on undocumented labor.

If you drive up to the AA factory as I did last Friday, you’ll be sure to see bright yellow signs in English and Spanish advertising the warehouse as a “sanctuary.” Half the employees you encounter will be wearing “Legalize LA” gear and many will be immigrants. Because of the slouching economy, the company said it won’t miss the immigrant workers if, after a “reasonable” amount of time to prove their legal status elapses, it’s forced to let them go. But the workers will probably miss American Apparel. Whatever you may think of figurehead Dov Charney, American Apparel is a model for sustainable labor in the US. Charney has built a neo-Marxist celebration of the worker, a happy little world where everybody makes $12/hour, eats subsidized lunches (they even have their own taco truck), has access to exclusive gear, and health benefits. It’s a far cry from the rest of the state.