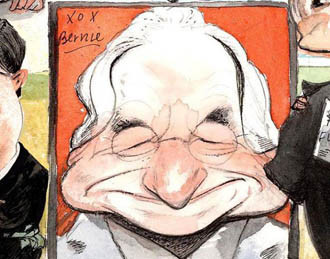 Citing safety concerns, Bernie Madoff‘s daughter-in-law Stephanie has legally petitioned to change her name—and those of her young children—to “Morgan,” the New York Post reports. It’s unlikely, of course, that anyone would hurt a couple of toddlers (the children are one and three). But more than a few who lost their life savings to history’s biggest swindler probably fantasize about taking a broken bottle to Stephanie’s husband, Mark Madoff, who filed an affadavit in support of the name change.

In our January/February issue, reporter Erin Arvedlund, the first non-trade journalist to question Madoff’s unusually consistent returns, provided a still-current update on the status—legally and otherwise—of Madoff’s inner circle, including his two boys, Mark and Andrew. Here’s one snippet from our report, “Meet the Madoff Minions.” (Picard is Irving Picard, the court-appointed trustee in the Madoff bankruptcy case.)

Papa Madoff claimed his boys, who codirected trading at the firm, learned of the fraud only when he told them, days before his arrest. Alternate theory: Madoff knew the jig was up and took the fall to protect his family. Mark Madoff withdrew nearly $67 million from company accounts over the years, trustee Picard alleges, and divides his time between a $5.6 million Manhattan apartment, a $6.6 million Nantucket home, and a $2.2 million pad in Greenwich, Connecticut. All told, Mark got more than $29 million in salary and bonuses, and racked up $797,000 in personal expenses on the corporate AmEx. Andrew Madoff received more than $31 million in compensation, Picard claims, and used another $32 mil to cover expenses such as a $300,000 investment in Blow Styling Salon, LLC, and a $75,000 payment to Lock and Hackle, a members-only fly-fishing and hunting club. And waiter beware: After dropping more than a grand on the corporate card at Manhattan’s swank Per Se, Andrew left a miserly $60 tip. Picard is suing Mark and Andrew, along with Bernie’s brother Peter and his niece Shana, to recover some $199 million. But their assets are not frozen, and none of them has yet been charged with any crime.

Arvedlund, whose book about the Madoff affair is titled, Too Good to Be True, similarly details the exploits of Bernie’s wife, older brother, niece, right-hand man, and key enablers—including the keystone cops at the SEC who ignored enough red flags to supply a Soviet political rally. As for the grandchildren, the Madoff name isn’t so much a safety issue as one of shameful notoriety. If you happen to live in New York City and your name happens to be Madoff, well, best of luck in your future prospects.