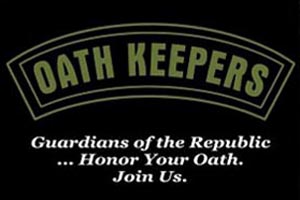 What happens when Tea Party-minded soldiers and police—largely Obama-hating, Communist-fearing, Glenn Beck-listening white men with weapons and combat training—are encouraged to take matters into their own hands?

In our upcoming March/April issue, Justine Sharrock spends quality time with the Oath Keepers, one of the “patriot” movement’s fastest-growing promoters of revolutionary angst and conspiratorial rhetoric.

There are scores of patriot groups, but what makes Oath Keepers unique is that its core membership consists of men and women in uniform, including soldiers, police, and veterans. At regular ceremonies in every state, members reaffirm their official oaths of service, pledging to protect the Constitution—but then they go a step further, vowing to disobey “unconstitutional” orders from what they view as an increasingly tyrannical government.

Last Thursday, following a New York Times story about the increasingly violent atmosphere at Tea Party rallies, Oath Keepers founder Stewart Rhodes appeared on The O’Reilly Factor to counter criticism from the Southern Poverty Law Center. In the segment, Rhodes portrays Oath Keepers as little more than a bunch of average Americans trying to hold on to their constitutional rights. But his host isn’t buying it. After Rhodes explains his goal of inspiring soldiers and police to disobey unconstitutional orders, O’Reilly responds, “if it’s a matter of interpretation, you could have anarchy easily.” Watch the clip below:

O’Reilly got this one right. In her profile, Sharrock also hangs out with Lee Pray, an alienated active duty soldier who identifies with the group and takes its fearful rhetoric at face value (like the assertion that our rogue federal government will find some pretext to declare martial law and start rounding up citizens into camps). That guys like Pray are stockpiling weapons in preparation for such an eventuality is proof enough that soldiers shouldn’t be drawing their own constitutional lines in the sand. (Unlike Rhodes, his foot soldiers are not constitutional lawyers.)

Then there’s Charles Dyer, a.k.a. July4Patriot, closely associated with Oath Keepers until January, when he was arrested on child-rape and illegal-weapons charges (for an allegedly stolen military grenade launcher). Although militia types have rallied to Dyer’s defense, dubbing him the “first POW of the second American Revolution,” Rhodes quickly distanced his group from the former Marine. Never mind that before Dyer’s arrest, Rhodes had reposted Dyer’s popular YouTube clips on the Oath Keepers website and had engaged Dyer to speak at an Oklahoma Tea Party rally on the group’s behalf.

Read Sharrock’s “Age of Treason” and the associated slideshow, “The Tea Party’s Military Wing,” for the inside scoop on Oath Keepers and its enablers, ranging from Glenn Beck and Alex Jones to Phyllis Shlafly and far-right members of Congress.