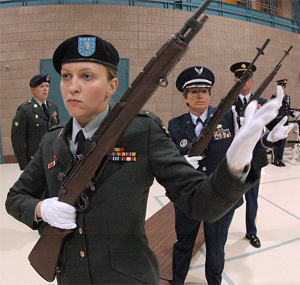 As we enter Memorial Day weekend, with its parades and programs honoring service to country, it’s worth asking: What, precisely, do the Army, Navy, Marines, and Air Force still have to work out before deciding whether gays and lesbians can serve in their ranks? As a vet and ex-contractor, I know firsthand that the implementation of any new defense policy, from rules of engagement to Facebook usage guidelines, is hard and takes time. But implementation is different from deliberation—and where “Don’t Ask, Don’t Tell” is concerned, the service chiefs seem intent on doing the latter, not the former. “We must make logical and pragmatic decisions about the long-term policies of our armed forces,” Marine Corps Commandant Gen. James Conway wrote in a letter to Sen. John McCain (R-Ariz.), an ex-sailor who opposes repailing DADT. Each service’s top uniformed officer gave McCain a similar letter, advocating what Conway called an “organized and systematic approach” to studying the issue.

While he’s at it, perhaps Conway could study what’s wrong with the Corps’ new crop of officer trainees. Thirteen newly minted lieutenants are being discharged from the service after instructors at The Basic School in Quantico, Virginia, learned they’d cheated to pass a land navigation exam. There are a few things all Marines need to be good at: physical training, shooting, and not getting lost. Yet at least one of the cheaters told investigators he didn’t see the point of the land-nav exercise in the age of GPS. “While proficiency with a Lensatic compass is important, their moral compass is of utmost importance to our Corps,” Col. George W. Smith JR., the school’s skipper, told Navy Times. “Their moral compass must unerringly point to do the right thing at all times. Without that, in my strongest opinion, they don’t have the foundation to continue to serve as Marine leaders.”

Col. Smith is right: The moral compass matters. And if the service chiefs are really serious about spending the next half a year deliberating whether homosexuals pose a threat to military reputations and readiness, their moral compasses are demagnetized. The armed services are facing a crisis of honor, courage, and commitment: a wartime record of graft, sexual assault, and dishonesty in the ranks, committed by (presumably) straight service members. A daily scan of Stars & Stripes or Military Times proves gays can’t commit an offense that a dysfunctional military bureaucracy isn’t already doing to itself. Here are but a few stories of note this week:

I once served Adm. Gary Roughead, the Navy’s chief, when he was the Naval Academy’s commandant, and I have respect for the man. But before he expresses any more concerns over DADT to Sen. McCain, perhaps he should account for what went wrong in the Velasquez case. Or in that Marines cheating case, where two of the lieutenants were Naval Academy grads—one of whom admitted that he’d failed several classes and had at least one honor violation, which is normally an expulsion-level offense.

It does me no pleasure—particularly on a weekend where we ought to honor our service members’ sacrifices—to hurl lightning bolts at military leaders. But in the debate over DADT, both sides seem to grant a notion of the armed forces as a monolithic bastion of national virtue. They’re wrong. Despite its mission, it’s just another subculture made up of human beings. And the crooked timber of humanity can still be found thriving there, in an all-straight force. To argue, as some ideologues do, that gays will take the military over a moral or strategic cliff is not only hyperbolic; it’s stupid. And it’s 180 degrees off course. Thanks to a deficit of leadership, our armed services leaped that cliff long ago. Bringing equality back to the ranks may be the last best hope for restoring a fractured sense of honor to our warfighters.