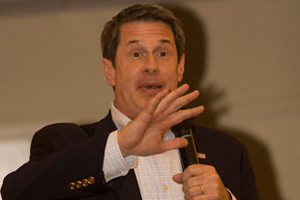 File this story in the so-outrageous-it-can-only-be-true folder. An veteran aide to Sen. David Vitter (R-La.), whom Vitter has tapped to handle women’s issues, turns out to have pled guilty in 2008 to charges relating to a knife attack on an ex-girlfriend. Brent Furer, ABC News reports, was accused of threatening to kill the woman, putting his hand over her mouth, and cutting her hand and neck. Nonetheless, ABC says, Furer, who also has an open warrant in his name in Louisiana for a driving while intoxicated charge, still collects his $54,000, taxpayer-funded salary through the Senate.

For “Diaper Dave” Vitter, who was exposed in 2007 as a client of the DC Madam, the revelations about his women’s issues aide again highlights the gulf between the senator’s statements and his actions. Vitter’s office told ABC that Furer was put on leave from the office while a court handled the 2008 case, and that “further significant disciplinary action” had been taken as well. Still, Furer did eventually return to work in the Louisiana senator’s office.

A leading Washington ethics watchdog group, which alerted ABC to the aide’s past record, criticized Vitter for keeping him around. “It says something terrible about Senator Vitter’s judgment that this is the kind of guy he wants to keep in his office,” Melanie Sloan, executive director of Citizens for Responsibility and Ethics in Washington, told ABC. “The people of Louisiana should be asking, ‘What does this guy do for Senator Vitter to keep him around?'”

As it turns, the aide has quite a paper trail:

The 2008 case was not the first brush with the law for Furer. Court records and published reports show he has been arrested for driving under the influence at least three times, and once for cocaine possession.

In one instance, in May 2003, police chased Furer’s swerving vehicle, and saw what they believed to be Furer and a female passenger fighting as the car crossed back and forth over the center lane divider, according to the arrest report. Furer kept driving after the woman exited the vehicle and was eventually pulled over. The arrest report says his blood alcohol measured .132, and noted that Furer was “very verbally abusive towards the police.” …

Another ugly incident occurred in late 2008 when Furer was driving to pick up medication from a Washington area pharmacy. Furer, a former Marine and veteran of the first Gulf War, has told lawyers he takes medication for treatment of post traumatic stress disorder.

The ride turned ugly when Furer and another former Marine, Gregory Blake became caught up in a violent road rage incident in late 2008. As Furer allegedly chased Blake through the streets of Washington in their SUVS, Furer struck a motorcyclist, throwing the cyclist to the pavement and breaking his femur, according to a lawsuit that followed. When police arrived, Furer flashed his senate ID and told them he worked for Sen. Vitter, according to court records. Furer’s insurance company settled the civil case.

Blake said he was outraged to learn where Furer worked.

“That guy should not be working for the U.S. government,” he said.

[UPDATE]: The AP reports that Brent Furer, the women’s issues aide to Sen. David Vitter (R-La.) who allegedly attacked his girlfriend with a knife, has resigned. Vitter reportedly accepted the aide’s resignation.