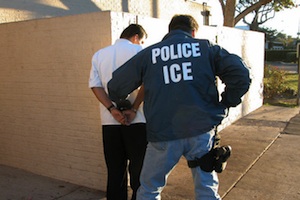 Did California really pass an immigration law that’s just as punitive as Arizona’s—but just failed to enforce it? That’s the claim currently richocheting around right-wing blogs and Tea Party sites—trickling all the way up to conservative standard-bearers like The Washington Times. The origin of this claim seems to be a viral email sent from retired Border Patrol agent and Arizona resident Harold Beasley, who claims that California has an immigration law on the books that’s almost identical to the Arizona measure. Beasley is partially right, but mostly wrong. The state did pass such as law as part of Proposition 187, a harsh immigration measure that tried to deny any state-sponsored services to illegal immigrants. But the law is no longer enforceable—because the federal courts struck it down over a decade ago.

This important fact hasn’t stopped Beasley—and others—from crying hypocrisy. Beasley cites a passage of the California Penal Code, Section 834b, which says that California law enforcement must attempt to verify the immigration status of suspected illegal immigrants and turn them over to the federal authorities for prosecution or deportation. “Wow, is this the pot calling the kettle black?” writes Beasley, according to one version of his viral email. “You are telling Arizona that we are racists and will be racial profiling… You have had the same law for many years and NO ONE has been protesting your law. WHY IS THAT?”

Beasley said in a phone interview that he was inspired to write the email because he had spent 25 years working as a Border Patrol agent in California; during that time, he said, he thought that the few police officers who sent suspected illegal immigrants his way were following Section 834b, which he claimed was enacted in 1977. Beasley, who isn’t actively involved in any political groups, then sent the message to conservative pundits like Glenn Beck and Bill O’Reilly, as well as California officials who had criticized Arizona’s law. While he never did end up hitting the cable news circuit, his claim about Section 834b spread rapidly through the right-wing blogosphere, posted on conservative sites like ResistNet, a Tea Party activist hub, and Michelle Malkin’s Hot Air. The Washington Times tried to use Section 834b to debunk the Los Angeles city council’s decision to boycott Arizona. And Beasley says that he’s gotten “hundreds” of calls since he sent the original missive last month, having put his home phone number on the email in hopes of getting a call back from Glenn Beck’s producers. “This should be on the front page of every CA newspaper—how come it isn’t?” writes a blogger for the Patriot Heart Network, a Tea Party activist site. “I hope those mayors who wanted to boycott Arizona feel like total idiots.”

Or not. It turns out that the section of the California penal code conservative activists have been circulating, passed in 1994 as part of Prop 187, was declared unconstitutional in 1997 by a federal court, making it null and void. While it technically remains on the books today, the law isn’t enforceable. Even the Federation for American Immigration Reform—a major anti-immigration group—was forced to post a FAQ debunking the claim after being besieged by the phony meme. When confronted with the facts, Beasley responded: “I’m not a lawyer and I don’t know. I’m just sick and tired of people in California calling us racist…I’m just an old country boy from the Midwest.”

What’s more, Prop 187 was struck down precisely because it was determined to infringe upon the federal government’s jurisdiction over immigration—the argument that’s at the heart of many of the lawsuits against Arizona’s measure, which the Justice Department has announced it will challenge. “The Arizona law [SB 1070] is constitutionally deficient for precisely the same reasons that Proposition 187 was struck down,” wrote Kevin Johnson, Dean of the University of California Davis School of Law. Far from being a justification of Arizona’s law, the California example may simply offer further proof that its draconian measure is unconstitutional.