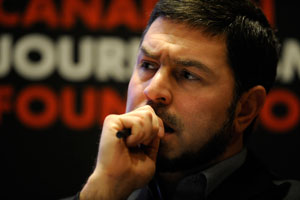 On Monday, the Supreme Court declined to hear the appeal of Maher Arar, a Canadian citizen who was trying to sue top US officials under the Torture Victims Relief Act. But Arar isn’t a jihadist or a crazy person. He was an engineer who was falsely identified as a terrorist by the Royal Canadian Mounted Police. (They later apologized.) Here is what happened to him.

On Sept. 26, 2002, Arar was detained by American authorities during a layover at New York’s John F. Kennedy airport. He was interrogated. Less than two weeks later, he shackled and hooded and placed on a plane bound for Jordan. Once in Jordan, he was transferred overland to Syria. While in Syria, Arar was tortured at the behest of the American government, according to a 1,200-page report released by a Canadian government inquiry that concluded up in 2006. Here’s how Arar describes a few of his first days in Syria:

Early in the morning on October 10 Arar is taken downstairs to a basement. The guard opens the door and Arar sees for the first time the cell he will live in for the following ten months and ten days.

Arar calls the cell a “grave.” It is three feet wide, six feet deep and seven feet high. It has a metal door, with a small opening which does not let in light because of a piece of metal on the outside for sliding things into the cell. There is a one by two foot opening in the ceiling with iron bars. This opening is below another ceiling and lets in just a tiny shaft of light. Cats urinate through the ceiling traps of these cells, often onto the prisoners. Rats wander there too.

There is no light source in the cell. The only things in the cell are two blankets, two plastic bowls and two bottles. Arar later uses two small empty boxes – one as a toilet when he is not allowed to the washroom, and one for prayer water.

Early the next morning Arar is taken upstairs for intense interrogation. He is beaten on his palms, wrists, lower back and hips with a shredded black electrical cable which is about two inches in diameter. He is threatened with the metal chair, electric shocks, and with the tire, into which prisoners are stuffed, immobilized and beaten.

The next day Arar is interrogated and beaten on and off for eighteen hours. Arar begs them to stop. He is asked if he received military training in Afghanistan, and he falsely confesses and says yes. This is the first time Arar is ever questioned about Afghanistan. They ask at which camp, and provide him with a list, and he picks one of the camps listed.

Arar urinated on himself twice during the interrogation.

Throughout this period of intense interrogation Arar was not taken back to his cell, but to a waiting room where he could hear other prisoners being tortured and screaming. One time, he heard them repeatedly slam a man’s head on a desk really hard.

In October 2003—more than a year after he had been sent to Syria—Arar was finally returned to Canada. He was never charged with a crime. On November 4, 2003, he addressed the Canadian media:

In his statement, Arar called for a public inquiry into his treatment. The government launched an inquiry in February 2004, but the US government refused to cooperate. The inquiry’s final report concluded that Arar was totally innocent of any involvement in terrorism and confirmed that he had been tortured in Syria.

Arar also sought legal redress for his treatment. He received a C$10.5 million settlement and a formal apology from the Canadian government. The US government was not so apologetic. It fought Arar’s lawsuit tooth and nail, and on Monday, it won decisively. “Today’s decision eliminates my last bit of hope in the judicial system of the United States,” Arar said Monday. “When it comes to ‘national security’ matters the judicial system has willingly abandoned its sacred role of ensuring that no one is above the law. My case and other cases brought by human beings who were tortured have been thrown out by U.S. courts based on dubious government claims. Unless the American people stand up for justice they will soon see their hard-won civil liberties taken away from them as well.”

Kevin Drum says that there’s “really no silver lining to this,” but notes that winning in court could make the Obama administration more likely to come up with some other way to apologize to Arar. I wouldn’t count on that. If you want to learn more about all this, you can read Arar’s website and his legal team’s press release on Monday’s developments. Democracy Now! had a good episode in February on Arar’s ordeal; you can watch that here. In 2006, Amy and David Goodman wrote about Arar and the US-Syria torture ties for Mother Jones; that article is here. MoJo also has a good rundown of extraordinary rendition by the numbers; check that out here.