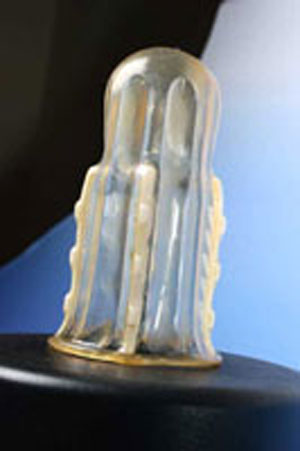 Yesterday, I reported that women should never feel the need to arm their vaginas to snare rapists. But that’s the unfortunate case/real-life horror show since the patented device called Rape-aXe arrived.

CNN reported that the Rape-aXe’s creator, Sonnet Ehlers “is distributing” the device during the World Cup, a statement which was picked up by bloggers and daily news sources all over. This, however, is not true, which sucks since, as I pointed out, 317 South African women will be raped during one 90-minute World Cup game. The truth is Ehlers wants to pass out the toothed condoms during the World Cup, but she hasn’t and won’t be able to unless she receives enough donations. I discovered this fact this morning after reading an email she sent me last night. I emailed her back to find out if there’s been any fallout from CNN getting a vital part of the story wrong, and to get her take on why South African donors aren’t breaking down her door to jump on this (unfortunately) much-needed product. Once she replies, I’ll update this post. In the meantime, here are Ehlers’ responses to my other questions:

MJ: Why did you choose the distribute the Rape-aXe during the World Cup?

SE: Because I wanted to protect women against possible rape. You know parties and with parties comes liquor.

MJ: How many have you distributed during the World Cup?

SE: I received by then only $120. Could not give out free condoms with such little money. I hope donations will come in so that I can give free condoms to women.

MJ: Has anyone outside of South Africa ordered the Rape-aXe? If so, where were they from?

SE: From all over the world. Head office for license rights and distribution is in Germany

MJ: How much does it cost?

SE: It will differ from country to country

MJ: I’ve read reports that South African officials are determining if and/or when to make the Rape-aXe available in the tampon aisle of stores. Is this true?

SE: It will be sold in the aisle of condoms

MJ: Will the Rape-aXe be readily available in stores?

SE: It depends on the distributors in each country

MJ: When will the Rape-aXe be in stores?

SE: It depends on the country

MJ: According to your previous answer, you have not distributed Rape-aXe condoms so far for the World Cup. Is this correct?

MJ: Do you intend on distributing 30,000 Rape-aXe condoms in South Africa during the World Cup if the donations come in?

MJ: Also, when (what date) will the Rape-aXe be available in the condom aisles in South Africa?

SE: As soon as a South African becomes a distributor. No one has come forward.